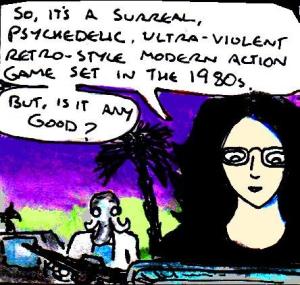 Well, it’s been a while since I last played a game that was made this decade. Still, during a sale on GOG last summer, I happened to spot a rather interesting-looking indie game called “Hotline Miami” which seemed like it might actually run on my classic mid-2000s computer.

During the sale on GOG, the DRM-free direct download of this game I bought was reduced to £1.19. Although, at the time of writing, the full price for it is £7.79 on GOG and £6.99 on Steam (albeit with Steam’s DRM). In terms of length, I’d say that this game took me about 7-10 hours (over about two days) to complete. Still, if you aren’t used to “challenging” old school-style games, then it might take you longer.

Surprisingly, the GOG version doesn’t come with that much in the way of extras. However, if you have VLC media player (or anything that will play “.ogg” audio files), then the game’s soundtrack can be listened to if you’re willing to go poking around in the game’s directory.

Likewise, if you’ve got an older machine, the GOG version of this game comes in two versions. There’s the default “GL Version” of the game and another version called the “original version” that can be found in the game’s directory. The “original version” was the only version that would actually run on my vintage computer, albeit with over a minute of loading time before the program began. Still, once it loaded, it ran fairly smoothly.

I should also warn you that this review will contain some (unrealistic) GRUESOME IMAGES. I’ll try to keep them to a minimum but, since this is a commercial game, I feel an obligation to show you at least a small part of what to expect if you buy it.

“Hotline Miami” is a surreal retro-style action/ dark comedy/ horror/ combat-based puzzle game from 2012, which is set in Florida during the late 1980s. For the bulk of the game’s 20 chapters, you play as a man called Jacket who gets mysterious answering machine messages that tell him to visit various buildings around the city. 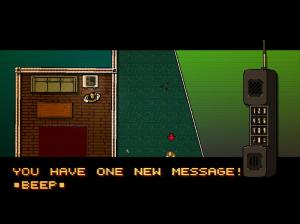 Whenever he arrives, the buildings are almost inevitably filled with heavily-armed members of the Russian Mafia. Instead of running away like a sensible person, Jacket merely puts on a mask and decides to kill all of the gangsters instead. At best, he’s some kind of creepy brainwashed vigilante and, at worst, he’s a serial killer of some kind. Seriously, you’ll have to come to your own conclusions about this.

And, yes, his grip on reality isn’t entirely solid either…

One of the first things that I will say about this game is that it looks like it was designed under the influence of some fairly serious mind-altering substances. Still, everything from the hilariously bizarre dialogue to the glowing psychedelic backgrounds really help to give the game a sense of personality. Likewise, the surreal humour of the game is also welcome comic relief from the more disturbing and/or ultra-violent elements of the game.

And, make no mistake, this is a violent game! Although it isn’t the most violent game I’ve ever played, it is probably somewhere between Zombie Shooter and Brutal Doom in terms of sheer brutality.

Although the gory violence in this game is somewhat cartoonish, it sometimes has a rather sadistic edge to it that will make your character seem little better than the gangsters he is fighting. Likewise, after completing each level, you have to walk back through the entire level and gaze with disgust upon the grisly bloodbath that your character has created.

This element of the game is probably designed to undermine the sense of victory that a player is usually expected to feel after each level. And, yes, the levels will often be CONSIDERABLY more grisly than the example in this screenshot!

The game’s story is kept intriguingly mysterious, with plenty of gaps for you to fill with your own imagination. Some story elements are barely explained and some are left deliberately unexplained. Likewise, between levels, your character will do mundane things like getting a pizza or renting a video, which contrasts heavily with the grisly events of the rest of the game. However, these scenes can get a little repetitive though. 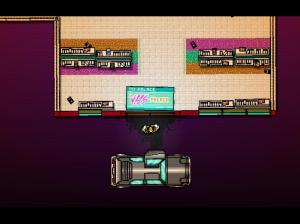 Still, the game is set somewhere where you can still get movies on VHS! Awesome 🙂

As for the gameplay, the game contains a surprisingly innovative combat system. Yes, innovation. In a modern game. The main twist in this game is that, despite the cartoonish graphics, the combat system is surprisingly “realistic”. What this mostly means is that you have exactly the same amount of health points as each of your adversaries do.

In other words, if you get shot once or struck with a heavy object, you’re done for! So, instead of mindlessly shooting your way through waves of adversaries, you actually have to think and play strategically. You have to figure out the “rules” that the game’s AI follows, you have to know when to retreat and when to fight, you have to memorise enemy locations, you have to choose and use any available weapons carefully and, most importantly, you have to attack the gangsters before they attack you.

And, yes, there’s even a “combo” system too. You can unlock extra stuff at the end of each level if you get a high score. And, best of all, NO micro-transactions 🙂 If you want cool stuff, you actually have to win it yourself!

It’s kind of like how the most thrilling parts of old early-mid 1990s FPS games are the parts where you’ve only got one health point left and you have to figure out how to get past a horde of monsters. This game is basically that, for almost the entire game 🙂 In other words, although this game is filled with ultra-violent combat, it’s actually more of a puzzle game than an action game. 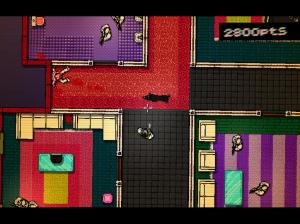 For example, you have to work out how to fight these six guards (and an adorable guard dog), with only one “health point” left.

This is helped by the fact that, like in 1990s FPS games, the iteration time is incredibly quick. Once you die (and this will happen a lot!) you just tap “R” and you’ll instantly re-start that segment of the level. Although this sounds repetitive, it allows you to quickly learn each level and to form new plans and strategies. Plus, to keep things interesting, the weapons and enemy behaviour are randomised slightly between restarts.

In keeping with the theme of your character being pretty much the same as the gangsters he fights, you can only carry one weapon at a time. However, since most adversaries drop weapons, this usually means that you’ll not only be switching between weapons fairly quickly but that you’ll also have to make strategic decisions about which one of the nearby weapons you want to use.

Likewise, you can also do a few extra things like throwing empty weapons at enemies and performing brutal “execution” moves on unconscious foes (albeit with the risk that another enemy might spot you doing this).

Aside from the top-down perspective, the only real concession in favour of the player is that – before each mission – you are given a choice of animal masks to wear. These masks are unlocked throughout the game and each one will give you some kind of special ability (eg: fast movement, silent weapons etc…). This element of the game can really come in handy, not to mention that it really adds to the surreal atmosphere of the game too:

Needless to say, all of the masks have silly names too.

In addition to the “everyday life” segments I mentioned earlier in this review, the standard combat gameplay is also broken up by several puzzle-based boss fights that will often require you to discover and use one particular strategy. But, if you played a lot of games from the 1990s, then you’re probably more than familiar with this type of boss battle.

The only other major gameplay variation is the fact that one level is an *ugh* stealth-based level. This level involves sneaking around a hospital, whilst trying to stay out of sight from the doctors and policemen who wander the halls. In addition to this, you’ll also get random headaches (that mean you can’t move or hide for a few seconds) if you walk too quickly or too far. Seriously, I absolutely loathe and despise this type of slow, dull, nerve-wracking gameplay and, if it wasn’t for walkthroughs on Youtube, I’d have probably stopped playing there and then!

In terms of level design, this game is surprisingly good. Many levels are split into 2-4 segments and each one of these is like a small combat-based puzzle.

The segments are often long enough to be challenging, but short enough that having to restart them numerous times won’t feel like too much of a chore. The level design is occasionally mixed up with the addition of new elements, such as windows that can be fired through or – at one point – a booby trapped door. 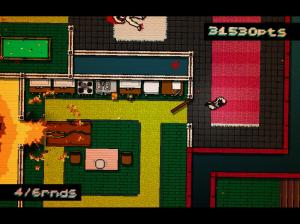 And the scene where you figure out how to deal with it is truly epic!

Likewise, there’s a point where you think that you’ve finished the game, only to be presented with another 3-4 levels featuring a different character. These levels include a few gameplay tweaks (such as only allowing you to use one specific weapon) but their appearance after a credits sequence can sometimes make it feel like the game has outstayed it’s welcome a little.

In terms of the art design, this game is outstanding! Seriously, I cannot praise it highly enough. The game uses a very distinctive art style that has been heavily influenced by the 1980s (and possibly various hallucinogens too). In contrast to the dull and gritty settings of many modern games, everywhere here is bright and vivid – and the game uses a more limited colour palette to beautiful effect in so many ways.

Seriously, it looks gloriously ’80s in the best possible way 🙂

The game’s music is also outstandingly brilliant too! Whether it’s the frantic new retro wave synth music from Perturbator or the eerily distorted 1960s hippie music that plays in the main character’s apartment, the music is an absolutely perfect fit with the themes and visual style of the game. One of my favourite background tracks has to be one that has obviously taken heavy influence from the end titles music from “Blade Runner”.

All in all, although “Hotline Miami” isn’t a perfect game, it’s still astonishingly fun and brilliantly unique. In addition to frantic, strategic combat-based gameplay, it also includes lots of interesting art and hilariously bizarre humour. It’s a modern retro game in all of the right ways. Yes, the game’s surreal nature and ultra-violent content might not be for everyone. But, if you aren’t easily shocked and you love things like old FPS games, Fear And Loathing In Las Vegas, the 1980s etc.. then you’ll be right at home here.

If I had to give it a rating out of five, it would get at least a four.