Back when I was a young teenager, I tried to watch as many horror movies as I could. Since I didn’t really look old enough to buy them on VHS/DVD and since I could hardly ever convince anyone to buy them on my behalf, I often just ended up recording them off of the TV with my VCR. Amongst many of the rebellious late-night horror movies that Channel 4 had to offer back then, there was a film called “John Carpenter’s Vampires”.

Needless to say, when I was in a bit of a nostalgic mood recently, I vaguely remembered this film. After a quick look online, I noticed that second-hand DVDs of it were going ridiculously cheaply on Amazon. And, since my VCR doesn’t work any more (and the tape with “Vampires” on it seems to be lost to the mists of time), I decided to get it on DVD.

So, let’s take another look at “John Carpenter’s Vampires”: 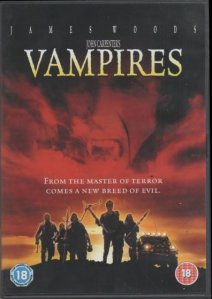 The film focuses on a group of rough, tough American vampire hunters, led by Jack Crow (Woods), who have been hired by the Catholic church to track down and kill the master vampire, Valek. 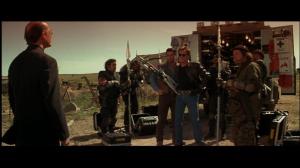 And, yes, they are that gloriously ’90s combination of “badass” and “silly”.

Initially, things seem to be going fairly well. After the hunters successfully battle a nest of vampires in New Mexico, they immediately rush to the nearest church to pray for… Ha! Only joking! In true ’90s action hero fashion, they travel to a nearby motel to have a wild party. However, as the party gets into full swing, an uninvited guest shows up…. 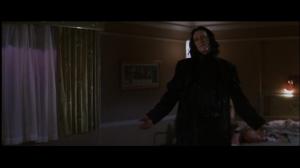 You honestly weren’t going to have a decadent party without a vampire, were you?

After the ensuing bloodbath, only Jack Crow, his buddy Montoya (Baldwin) and a party guest called Katrina (Lee) manage to get out of the motel alive. Well, mostly.

Katrina has been bitten by Valek and is slowly turning into a vampire. Although Montoya wants to shoot her before she turns, Crow realises that she has a psychic link with Valek. A psychic link that will allow them to track down Valek and get their revenge…….

One of the first things that I will say about this film is that it is probably more of a gritty action movie than a horror movie. However, this really isn’t a bad thing – since it seems to have a vaguely Robert Rodriguez-esque style, tone, setting and atmosphere. Although it was directed by John Carpenter, this film is at least vaguely reminiscent of some of Rodriguez’s greatest hits from the 90s (like “Desperado” and “From Dusk till Dawn“).

In addition to this, this film is a vampire film from the 90s! This decade produced so many amazing things in the vampire genre, including films like “Bram Stoker’s Dracula“, “Blade“, “From Dusk till Dawn“, “Interview With The Vampire” and “Dracula: Dead And Loving It“, to novels like “Lost Souls” and TV series like “Buffy The Vampire Slayer” and “Angel“.

Back in the 90s, vampires weren’t sparkly romantics – they were usually either fearsome monsters or really handsome goth guys. In this film, the vampires mostly fall into the “fearsome monsters” category.

The only “Twilight” here is the time of the day when the vampires rise from their graves to feast upon the blood of the living.

Like with many vampire movies, this film has it’s own unique interpretation of the vampire genre too. Not only is the film’s main villain, Valek, given some backstory – but Crow and his team usually kill vampires by harpooning them with a crossbow bolt before dragging them out into the sunlight (where they burst into flames in the traditional fashion). Interestingly, the vampires in this film are also totally unaffected by things like garlic, crosses etc.. too .

Yes, these vampires are literally standing right next to a giant cross!

The film’s pacing is reasonably good too, alternating between blood-spattered action scenes and more suspenseful scenes. Likewise, the film’s lean 100 minute running time helps to ensure that the story moves along at a decent pace too.

The film’s writing is very much from the Quentin Tarantino-style school of writing too. But, although it lacks much of the wit that Tarantino’s films have, the dialogue here is suitably gritty and irreverent for a film of this type.

In terms of the characters, they’re reasonably good. Crow and Montoya are the kind of morally-ambiguous, rough characters who are only distinguishable from common criminals by the fact that they also fight vampires.

Katrina is something of an under-developed character though – and she spends a fair amount of the film having visions, trying to stop herself turning into a vampire and occasionally being treated roughly by Crow and Montoya.

Seriously, upon rewatching “Vampires” these days, I realised that I’d forgotten how misogynistic this old film can occasionally be. Although the vast majority of the film doesn’t really have this problem, there are at least a small number of scenes that will raise eyebrows. Still, given that Crow and Montoya are meant to be “unlikeable anti-heroes”, this might explain these elements of the film. Even so, a few moments of this film will be more “disturbingly dated” than anything else when seen these days.

Valek, on the other hand, is a really great villain. Not only does he have a suitably interesting backstory, but he’s able to be both menacingly sophisticated and fearsomely vicious. 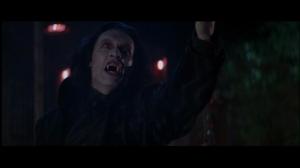 Nooo! WHY won’t anyone join my Cradle Of Filth tribute band?!

The only real criticism I have of his character is that he really doesn’t turn up often enough. Still, given that he’s meant to be a mysteriously elusive villain, then his relatively few appearances probably add to the mystique.

Likewise, the Catholic priest who ends up joining Crow, Montoya and Katrina about a little under halfway through the film is a reasonably good character too. However, he does the usual silly Hollywood thing of suddenly turning from a slightly bookish archivist into a badass action hero within a relatively short amount of time. 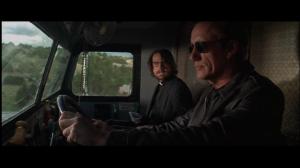 Seriously, he goes from a nervous, nerdy guy who Crow dislikes so much that he actually violently bullies him at one point….

…. to being an expert member of the vampire-hunting team within the space of about a day or so!

The fight scenes in this film are fairly well-choreographed and the special effects are also suitably splatterific too. Since this film is from just before the time when CGI effects began to become common, all of the special effects here are good old practical effects – which helps to lend the horror-based scenes a bit more realism. Not only that, the film even manages to squeeze in a (somewhat unrealistic in context) badass explosion too: 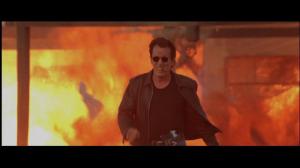 And, yes, James Woods walks away from it in the classic action movie fashion too.

In terms of the lighting and set design, it’s reasonably good too. Although most of the film takes place in abandoned parts of rural New Mexico, these run-down buildings and deserts are sometimes enhanced by some really cool lighting, which occasionally seems to involve some kind of red filter being placed on the top of the camera lens.

Seriously, the lighting is really cool in some parts of this film.

Plus, there are some really cool contrasts between light and darkness.

Not to mention that this location reminded me a little bit of the old “Silent Hill” games too.

All in all, this is a really good action/horror movie. Not only is it another great example of why the 1990s were the golden decade of the vampire genre, but it’s also thrilling, suspenseful and dramatic too. Yes, the dialogue could have been slightly wittier in some parts, and the film is occasionally somewhat misogynistic, but – despite these faults – it’s a great example of how awesome the vampire genre used to be.

If I had to give it a rating out of five, it would maybe just about get a four.