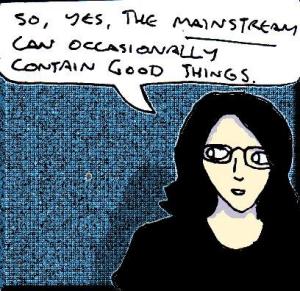 Although I sometimes take a somewhat cynical view of modern “mainstream” culture, I had a rather interesting experience that made me think about it in a slightly different way.

This was mostly because, during a nostalgic moment, I remembered that there was a brief period during the late 2000s/early 2010s when modern British pop music was actually really good.

In 2009-11, La Roux had released songs like “Bulletproof”, “In For The Kill” and “Tigerlily”. Tinie Tempah had released songs like “Pass Out” and “Written In The Stars”. Ellie Goulding put out a song called “Guns And Horses”, Clare Maguire put out a song called “Ain’t Nobody”, Jessie J released “Do It Like A Dude” and Mini Viva released “Left My Heart In Tokyo”. For a couple of years, modern mainstream pop music here was actually worth listening to.

Despite the fact that modern mainstream culture is often eye-rollingly terrible, it does contain good things. Although lots of them rarely appear at once (eg: the only other recent example I can think of is how both a remake of “Ghost In The Shell” and a sequel to “Blade Runner” were released in 2017) and some even have high barriers to entry (eg: system requirements for modern “AAA” computer games etc..), they are certainly there. Not to mention that many of the old things from the 1980s and 1990s that I love so much were probably at least slightly “mainstream” when they were originally released.

Yet, finding good things in the mainstream is often either a rare surprise or more like panning for gold. This is, of course, why “mainstream” stuff from the past often tends to be far better than modern mainstream stuff. Leaving aside the awesome historical nostalgia in many “mainstream” 1990s TV shows, movies etc… History usually has a habit of ensuring that only the best things are remembered.

Although this isn’t perfect – since contemporary classics (like “The Matrix” or “Half-Life“) can overshadow other good things in the same genre released at the same time – history does serve as a very good quality filter for “mainstream” things.

So, one of the best ways to find good things in the mainstream is simply to either wait a few years or to look at things that were mainstream a couple of decades ago. Generally, if something has stood the test of time, then this is usually a good sign.

But, often the best way to find good things in the mainstream is just to trust your own instincts. If something sounds like it could be good, then check it out (when the price has gone down a bit) and see how you react to it. I mean, some “mainstream” authors that I really like include Lee Child, J.K.Rowling, G.R.R Martin and Dan Brown. Yes, their popularity was the thing that first introduced me to their novels, but it was the quality and/or enjoyability of their work that kept me interested.

So, let your own quality standards be your guide (instead of advertising or whether something is “popular” or not).

Because, yes, sometimes good things become popular. Sometimes they don’t. Although there are a lot of criticisms to be made of the mainstream, the fact remains that there are occasionally good things that can be found there.