Well, I’m still in a “1990s cinema” kind of mood. So, I thought that I’d take a look at a film that I first heard about when I was a lot younger, but somehow only eventually got round to watching over twenty years later. I am, of course, talking about a John Woo film from 1996 called “Broken Arrow”.

So, let’s take a look at it. Needless to say, this review may contain SPOILERS. 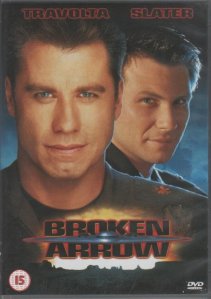 And, yes, I got this film on DVD. Since, unfortunately, I don’t have a functioning VCR.

Night-flying with doomsday devices…. What could possibly go wrong?

As the plane passes over the Utah deserts, a man dressed as a park ranger approaches two campers and, without warning, shoots them. Soon, several trucks filled with heavily-armed men show up. Of course, a few miles away, a real park ranger called Terry Carmichael (played by Samantha Mathis) gets a message over the radio about suspicious activity and decides to investigate.

Back in the air, the test flight is going well until Deakins suddenly pulls a gun on Hale and begins to mess with the weapons controls. After a scuffle, Deakins launches Hale’s ejector seat.

After this, he jettisons the unarmed nukes before bailing out and leaving the plane to crash into a mountain. Meanwhile, Deakins’ accomplices on the ground below watch the nukes slowly parachute down to earth and begin to recover them.

When Hale eventually lands (the next day, for some reason), he is apprehended by Carmichael – who initially mistakes him for a criminal of some kind. Of course, they peacefully resolve this initial misunderstanding with a jovial conversation… 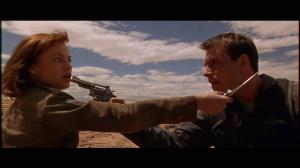 Who am I kidding? It’s an action movie. Even the good guys can’t meet each other without at least one fight scene.

After a tense stand-off, they realise that they’ve made a mistake. So, they decide to head back to Carmichael’s truck and radio the air force to warn them about the stolen nukes. However, when they get to the truck, they are suddenly attacked by a helicopter (piloted by one of Deakins’ henchmen) and the truck is destroyed. 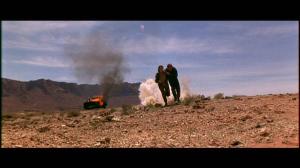 And, yes, the truck explodes dramatically. Again, it is an action movie.

So, outnumbered and outgunned, it is up to Hale and Carmichael to foil Deakins’ evil plot….

One of the first things that I will say about this film is that it’s one of the most fun action movies I’ve seen in a while. Yes, fun. Unlike grittier or more serious films in this genre, this film actually has a sense of humour and it also gleefully revels in it’s own silliness too. And, wow, this is so refreshing!

One of the great things about both the thriller genre and the action genre during the 1990s was that they had to be a bit more imaginative. Because the cold war had ended and 9/11 hadn’t happened yet, film-makers couldn’t just look at the news whenever they needed inspiration. So, things in the action genre back then tended to be a bit sillier and more imaginative. And they were all the better for it!

Interestingly, even though the film briefly mentions the after-effects of the cold war, the story of this film is still a somewhat timeless (and mildly silly) story about the villain trying to hold the US government to ransom via an elaborate and convoluted evil scheme.

But, before I talk about the humour and the characters, I should point out that this film still works extremely well as an action movie too. By stranding the two main characters in the desert and putting them up against a large number of well-trained and well-equipped villains, this film has a thrilling sense of drama and suspense. Yes, you can probably guess that the good guys are going to win, but you don’t know how they will win.

The action scenes in this film are extremely well-choreographed, with a good variety of gunfights, explosions, car chases and elaborate fist fights that help to keep the film interesting.

Plus, as highly-stylised as the action scenes are, they are at least mildly more “realistic” than the slick, eerily bloodless, videogame-like action scenes in many modern action films. This extra realism works really well and it really helps to increase the film’s suspense and drama too.

Likewise, the film’s pacing is also astonishingly good – with the film’s thrilling action being counterpointed by both suspenseful scenes set in the desert and tense scenes set in both the Pentagon and a nearby military base:

And, no, these scenes aren’t just filler. They show the wider impact of the events of the film, as well as making the action scenes seem more thrilling by contrast.

But, as great as the action/thriller/suspense elements of this film are, the thing that truly makes it stand out from the crowd are the characters and the humour.

Although humourous dialogue is nothing new in the action genre, this film handles it in a much better way than the more self-conscious humour of many modern superhero-style action movies. Even though there are so many funny lines in this film, they all fit organically into the context of the film and it never really feels like the screenwriters are trying too hard.

A lot of the humour in the film comes from the rivalry between Hale and Deakins, both before and after Deakins puts his evil plan into motion. In addition to this, there is also some slapstick humour, some dark comedy and some amusing exchanges between other characters too.

The rivarly between Hale and Deakins also helps to add some depth to the film, since they are both similar characters who have very different outlooks on life. One interesting narrative device in this film is that it both begins and ends with a fist fight between these two characters. At the start of the film, this consists of a friendly boxing match and, near the end of the film, this consists of a dramatic fight to the death.

The characters in this film are absolutely brilliant too. Hale is a rugged, charming and slightly cheeky hero who isn’t really an obnoxiously macho action hero, but more of a classic heroic character (and a somewhat idealised military character).

And, he doesn’t really do the “lone action hero” thing that often either. Seriously, movies and TV shows from the 1990s often included a surprising amount of teamwork.

Carmichael is somewhat out of her depth at first, but soon becomes an even more determined and resourceful character as the film progresses. Needless to say, there is also something of a slight romantic sub-plot between Hale and Carmichael (and they make a really cute couple), but this never gets in the way of the events of the film.

Yes, there’s the obvious romantic sub-plot. But, a surprisingly small amount of time is devoted to it.

But the stand-out character is, by far, Deakins. He’s a witty, handsome, intelligent, charming, calculating, ruthless and thouroughly villainous villain. Not only are his henchmen a formidable threat to the main characters, but he often uses his mind almost as often as he resorts to violence (eg: relying on scientific knowledge to defeat a military gunship that tries to stop him at one point). Likewise, he often also gets the best – and most hilarious- lines of dialogue in the film too. 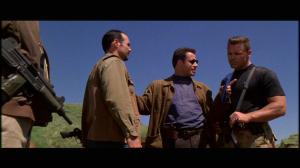 And, yes, he even wears cool-looking shades too. Interestingly though, this ISN’T one of the scenes where he actually has to tell his henchmen “Don’t shoot at the nuclear weapons!”.

Ok, at least 30-50% of the special effects consist of melodramatic explosions. But, would you expect anything less?

Plus, although a lot of film is set within a bright desert, the film still manages to include lots of cool 1990s-style gloominess and high-contrast lighting.

I’ve said it many times before, but people certainly knew how to use lighting well during the 1990s!

The film’s soundtrack is surprisingly good too. Although it is often fairly understated, one notable musical element of this film is that a really cool-sounding guitar piece plays during several scenes. Although this is nothing more than a few notes, it goes really well with the desert settings of the film (and has a slightly “wild west” kind of sound to it too).

If I had to give it a rating out of five, it would get five.