Here’s the next digitally-edited painting in my “Gothic Aberystwyth” series. Although there isn’t a non-rainy version of this painting, there is an alternative “Punk Album Cover”-style version.

This painting was kind of an interesting one. I’d originally planned to make an ominously gloomy 1980s horror movie poster-style painting of one of the walkways/corridors behind the Hugh Owen building on campus that I remembered from my university days (seriously, it’s hard to forget such a cool example of 1960s-style Brutalist architecture). But, when editing the painting, I eventually ended up settling on a “modern cyberpunk” kind of colour scheme instead.

As usual, this painting (and the “punk” version of it) is released under a Creative Commons BY-NC-ND licence. 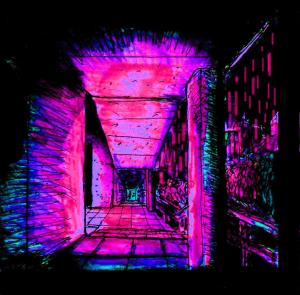