Well, although I had planned to write about webcomics (since I’m preparing a webcomic mini series for later this month), I thought that I’d talk about the horror genre again.

This is mostly because I’m still playing the PC port of “Silent Hill 3” at the time of writing. So, I thought that I’d look at a few things that classic-style survival horror games can teach horror writers.

1) Backstory: Even the less scary examples of survival horror games (eg: such as the original “Resident Evil“) tend to include a lot of backstory. This backstory puts the events of the game into a larger context, in addition to being a potent source of horror in and of itself. However, backstories in survival horror games are usually relayed in brief and subtle moments – often with at least some details left chillingly mysterious.

Sometimes, the player will get to read a short document, but backstory will often be either relayed through a short comment when examining something or it will be relayed purely through background details. In other words, classic survival horror games provide plenty of examples of how to use the old “show, don’t tell” technique in a chilling way.

For a visual example of this, just take a look at this screenshot from “Alone In The Dark“: 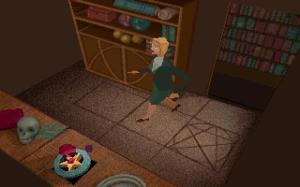 Even if you’ve never played the game before, you can instantly tell from the pentagram on the floor that this room has something to do with magic or mysticism. Then a glance at the skull on the shelf will probably tell you that this probably isn’t a good type of magic or mysticism. The narrow corridor outside the room and the stark stone floor also imply that the room could be a hidden room (it is!). All of these details instantly tell the audience something about the room without spelling everything out to them.

So, a few short visual descriptions that subtly hint at a much larger backstory can be a great way to add some extra horror to your story.

2) Symbolism: In many classic survival horror games, the monsters are just monsters. However, the “Silent Hill” games do something really interesting, which can be instructive to horror writers. In these games, the monsters are significantly scarier because they often have some kind of underlying theme or symbolism – which allows them to tap into other sources of horror.

One way that “Silent Hill 3” makes it’s monsters more disturbing is through disease-related symbolism. These disease-based monsters include giant spinning mosquito-like creatures, undead nurses, bandage-covered zombie dogs and creatures that look like giant sentient tumours. Even monsters that are meant to symbolise other things still have a somewhat “diseased” appearance. This allows the game to tap into a realistic source of horror (eg: diseases) whilst still being a slightly fantastical game about a nightmare-like parallel world filled with monsters.

So, one way to make your horror fiction more disturbing is to think of a disturbing theme and then find a way to subtly hint at this through the way that the main source of horror in your story is presented.

3) Atmosphere and subtle horror: The scariest parts of classic survival horror games often aren’t the parts where a monster jumps out of nowhere and attacks the player. They are either the general atmosphere of the game and/or a few relatively subtle moments that, whilst often not directly threatening to the player’s character, help to stop the player from getting too complacent.

These can include things like a phone suddenly ringing, something scrawled on a wall, a creepy piece of background music, chaotic locations, something being subtly different when the main character returns to a familiar location etc… Although subtle moments of horror aren’t extremely scary in and of themselves, they help to maintain a feeling of suspense by creating a mysteriously threatening atmosphere.

And, yes, atmosphere matters a lot in the horror genre. Leaving aside technical limitations, there’s a reason why many classic survival horror games are set in places like old mansions, derelict buildings, coldly futuristic laboratories etc…

So, subtle horror and a creepy atmosphere matter a lot more than you might initially think.

4) Vulnerability: One of the main reasons why the first three “Silent Hill” games are a lot scarier than the first three “Resident Evil” games is because the main characters are presented as being more vulnerable.

Out of the five playable characters in the first three “Resident Evil” games, four are military/police characters (eg: Jill, Carlos, Chris and Leon) and one (eg: Claire) rides a motorbike and is related to one of these characters. In other words, they all seem like tough, fearless characters who are knowledgeable about handling dangerous situations. As such, these games are less scary.

The three main characters in the first three “Silent Hill” games are a lot more vulnerable. Harry from the first game is a father who is searching for his missing daughter. James from the second game is a bereaved man who has seen better days. Heather from the third game is a teenage girl who goes shopping and finds herself plunged into a series of nightmarish events. None of these characters have any military training or experience with weapons (and the combat in these games reflects this fact). As such, these games are considerably more scary.

So, the lesson here is that – if you want to make your horror story scarier – don’t make your main character a tough action hero! The more of a threat that your character is to the scary things in your story, the less scary those things will be.