Woo hoo! This is the first comic in “Damania Doodle” – a slightly “non-canonical” mini series of single-panel monochrome cartoons featuring the characters from my long-running webcomic series (you can find many more comics featuring these characters in the 2016-18 segments of this page).

Basically, this mini series came about because – due to being busy with various things – I realised that I’d have to make a quick & easy mini series this month if I wanted to avoid a comic hiatus. Even so, I quite like how this comic update turned out – hopefully, the other 4-5 comic updates will be just as much fun to make too 🙂 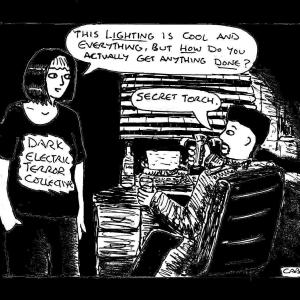