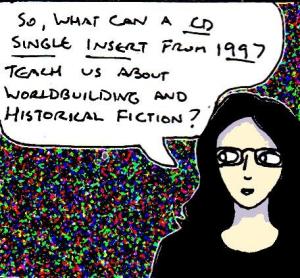 Although this is an article about worldbuilding and/or writing historical fiction, I’m going to have to start by talking about stuff from the 1990s for the next eight paragraphs or so. As usual, there’s a good reason for this that will become relevant later.

Anyway, whilst looking for something in my CD collection, I stumbled across an old CD single of Natalie Imbruglia’s “Torn” from 1997 that I’d forgotten that I even had.

Musical nostalgia aside, one of the interesting things about the CD single was that it contained a cardboard insert that initially just seemed like a silly piece of ephemera. But, the more I looked at it, the more I realised that it couldn’t have come from any time after the 1990s.

The insert is a form that allows the record company to send (what would probably be considered) junk mail to anyone who fills it in. Not only that, there’s a box at the bottom of the form that contains a hilariously transparent exhortation to send in the form even if you’ve already signed up to their list, just so that they can collect record sales data.

For a second, I wondered “who the hell would actually sign up for this?”

Then I remembered that the internet was a lot less widely-used during the 1990s. So, getting advertising brochures in the post was actually a valid way of keeping up to date with things like concerts, release dates etc…. if you didn’t want to buy music magazines every month.

I also realised that the fact that the internet was less common back then meant that there was much less awareness about things like spam, advertising tactics, giving out your details etc… So, companies could do this sort of thing and actually expect large numbers of people to respond.

Then I remembered that music was only sold on physical media during the 1990s, so there was less musical variety easily available to the public. This is noticeable by the fact that, although the limited list of genres on the form thankfully includes heavy metal, it doesn’t include genres like punk or gothic rock. Likewise, CD singles were popular enough back then for companies to actually add advertising to them too.

I could go on, but it’s amazing how much you can deduce about 1997 from a simple piece of ephemera.

But, why did I spend the last few paragraphs dissecting a piece of advertising? What does any of this have to do with worldbuilding and historical fiction?

Well, a lot actually. The CD single insert I’ve been talking about is a perfect example of how the general conditions of a time or place can shape even the smallest things. It is the sort of thing that could only have existed during the 1990s (or earlier). It only exists because the internet was a lot less common back then.

If you’re creating a fictional world, then it is small details like this that really make your “world” feel authentic. These are small details that can easily be ignored but which allow attentive members of the audience to deduce more about your fictional world by looking at them closely.

So, think about how your fictional world would shape “everyday” things. For example, if you were writing a story set in a world where television and film never existed, then your story should contain small details about things like radio, theatre, literature etc.. instead. But, these things should be presented in the same way as TV/film-related stuff is these days – since they would be a lot more mainstream in that particular world.

If you’re writing historical fiction, then things like this are what can really make your historical fiction feel authentic. Small, everyday details that couldn’t exist in any other period of history are one of the quickest ways to immerse your readers in the world of your story.

Even if it’s something as simple as showing a character from the 1990s picking up some blank VHS tapes or audio cassettes when shopping, small details are incredibly important when writing historical fiction.

So, yes, a single piece of junk mail-related ephemera can say a lot about an entire decade.