Well, although I’m playing a game called “Under A Killing Moon” (Edit: Unfortunately, I probably won’t review it) at the time of writing, I thought that I should try to make sure that there is at least one “Doom II”/”Final Doom” WAD review posted here this month.

So, I thought that I’d take a quick look at a WAD called “Quantum Strike (V2)“. However, at the time of writing, I’m about halfway through level three (of four). So, this article will be more than just a first impressions article, but less than a full review.

As usual, I used the “ZDoom” source port (version 2.7.9999.0) whilst playing this WAD. However, according to the text file that accompanies the WAD, it will also run with more modern versions of several other source ports such as GZDoom, Zandronum, PR/GLBoom+ and QZDoom.

If you’ve never heard of “slaughtermap” levels before, they are challenging levels (like “XXXI Cybersky“, “VeryHard“, “Stardate 20X6” etc..) that contain a linear series of arena-like segments which are filled with more monsters than you can actually fight.

This shifts the emphasis of the gameplay towards survival, fast-paced puzzle solving, dogged determination, knowing when to fight (or when not to) and knowing how to use the “rules” of “Doom II” to your advantage. Personally, I really like this style of level, but it is something of an acquired taste.

Seriously, when it is done well – like in this part of level two- these types of level can be brilliant 🙂

However, whilst this WAD certainly contains some good slaughtermap segments, it isn’t a perfect example of something in this genre. The main problem is that many of the monster-filled areas can feel a little bit too claustrophobic. One of the most important parts of any “slaughtermap” is that the player has enough room to run, dodge and take cover. This can make the difference between a fun level and a frustrating one.

This is especially the case with the early parts of the first level, which mostly take place within narrow corridors where there’s very little room for dodging and relatively little ammo, health, weaponry or cover on offer. At it’s best, this makes the level suspenseful. But it can also make the difficulty feel somewhat cheap, especially when the level occasionally leaves you sandwiched between two groups of monsters within a relatively narrow corridor.

The most jarring example of cheap difficulty in the first level is when the WAD’s new monster, the Afrit, is introduced during a corridor segment. This is a flying baron-type monster who has a powerful attack that spews lots of mancubus/revenant projectiles across a wide area. Although it’s always cool to see new monsters, this is a type of monster that shouldn’t be used in areas where there’s relatively little cover or room for the player to dodge.

Pictured: Not a monster that you want to meet in a corridor!

Although the first level is a rather fun level, the claustrophobic design doesn’t do it any favours. Even the “arena” area later in the level is a medium-size room that feels slightly claustrophobic when compared to the number of monsters you have to fight. This is compounded by the fact that there’s relatively little cover in this area, which can mean that the player barely has time to think or to formulate any kind of strategy.

And, if you try to hide in one of the alcoves here, expect to get walled in by ferocious monsters very quickly!

The second level has some really good arena segments that are suitably sized for this style of gameplay. However, there’s still something of a slight emphasis on claustrophobic walkways in some parts of the level.

And I also forgot to mention that you need to move along the walkways quickly, since there’s a cyberdemon in the middle of this area.

But, although this level is probably my favourite, I couldn’t actually find a way to end it. Even after all of the monsters in the final arena had died, I still couldn’t find a way of ending the level. So, I had to resort to using the “level skip” cheat.

The final battle at the end of the level is pretty epic though (and, like another cool segment earlier in the level, there’s actually enough room too!)

The third level is much more like a classic-style “slaughtermap” level, with arena-like areas, some cool-looking design and lots of monsters. 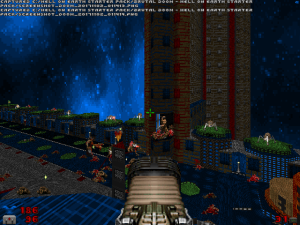 The coolest part of level three (that I’ve seen so far) is probably this bit, where you can see the level from above.

Although I haven’t finished this level at the time of writing, it is a reasonably fun example of a slaughtermap level. However, one slight criticism I have of it is that some parts can feel a little bit claustrophobic and/or not have enough cover.

Such as this part when it starts filling up with monsters (including a three-layered wall of chaingun zombies on the other side of the room!)

This WAD also takes a very traditionalist attitude towards jumping, but the levels are designed with this limitation in mind. So, I didn’t even notice that I couldn’t jump until about half an hour after I’d started playing. However, the fact that the WAD seems to force you to play the second level (and presumably the third too) from a pistol start is slightly annoying though.

Visually speaking, this WAD has a rather cool sci-fi/horror theme to it, which is vaguely reminiscent of both the original “Quake” and some of Skillsaw’s excellent “Doom II” WADs (eg: “Ancient Aliens“, “Lunatic” etc..) whilst also being it’s own thing too. Seriously, I really love the look of this WAD 🙂

I also love how this WAD sometimes has different colour schemes for different areas. 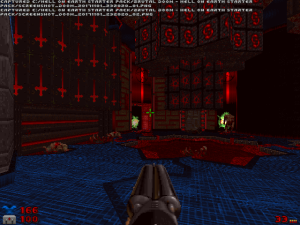 Plus, I love the “Quake”-like textures on this inventively-designed crusher too.

Likewise, the new music here is really cool too, and it mostly consists of 1980s/90s style MIDI music which has a wonderfully retro-futuristic sound to it. This goes really well with the visual style of the WAD and really helps to add some atmosphere to the levels.

All in all, from what I’ve played, this WAD is a mixed bag. Yes, it looks (and sounds) really cool. Yes, there are some really fun moments to be found here (especially in the second level). However, the emphasis on claustrophobic settings and pistol starts really doesn’t do this WAD any favours.

If I had to give what I’ve played a rating out of five, it would get three and a half.