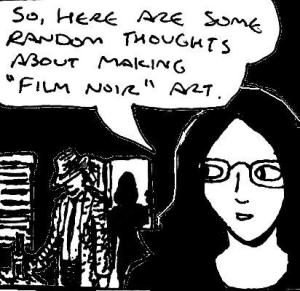 Well, at the time of writing, I seem to be going through a bit of a “film noir” phase with my daily artwork. So, although I’ve sort of talked about this subject before (such as this article about pulp fiction covers), I thought that I’d return to it again. But, first, here’s a preview of one of my upcoming “film noir” drawings: 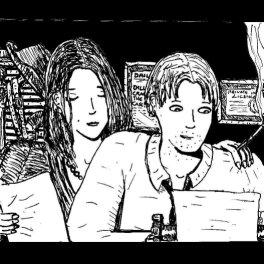 This is a reduced-size preview, the full-size drawing will be posted here tomorrow.

So, here are some rambling thoughts about making “film noir” art:

1) Visual storytelling: Simply put, good film noir art often tells a story of some kind. Even if it’s just a picture of a detective with a trilby hat, a trenchcoat and a revolver posing theatrically, then it still implies some kind of action or backstory.

The thing to remember about the noir genre is that, apparently, films in this genre used to just be called “melodramas” at the time they were released. In other words, they were films about dramatic events, dramatic actions and emotional drama.

You can also see a lot of these elements “turned up to eleven” if you look at old 1930s-50s pulp novel covers – if you ignore the sleazier examples of this type of art, then most old pulp novel covers tend to feature melodramatic scenes of people firing guns, bursting through doors, lurking ominously etc… If there’s one word (other than “garish” or “lurid”) that describes old pulp novel covers, it is action.

Of course, this doesn’t mean that your film noir artwork has to be particularly violent – but it should hint at some kind of story. Think of it as if your painting or drawing was a single frame taken from a longer scene in a film.

2) Source material: Although I’m fascinated by the noir genre, I haven’t actually seen that many “proper” film noirs. In fact, the only “authentic” film noir I can remember seeing is probably the Bogart/Bacall adaptation of “The Big Sleep”. Even when looking online for second-hand DVDs of films in this genre, I was surprised at how (relatively) expensive they were considering their age. So, I haven’t actually seen much of the original source material.

However, of course, I’ve seen lots of things that are inspired by film noir. In fact, my favourite film – “Blade Runner” – is basically just a sci-fi film noir. This film has been an absolutely huge influence on my art and my artistic tastes, so I’ve absorbed quite a few “film noir”-style techniques “second hand” from this film. The same is true for all of the film noir parodies, pastiches, TV show episodes etc… that I’ve seen over the years.

What was the point of mentioning all of this? Simply put, it’s ok to learn most of what you know about the genre from second-hand sources. Yes, it probably isn’t perfect. But, by having a unique mixture of inspirations that have been inspired by film noir, your work will be much more likely to be a more unique interpretation of the genre.

3) Lighting: Simply put, the term “film noir” is French for “black film”. One key feature in a lot of film noir style art is the emphasis on darkness and high-contrast lighting. Of course, this style of lighting is nothing new – I mean, artists like Caravaggio were using it centuries ago – but it is something that is worth remembering when making film noir style art.

A good general rule for this (which works for lots of other types of art too) is to ensure that at least 30-50% of the total surface area of your drawing or painting is covered with either black ink or black paint.

This makes the lighting and colours appear brighter and more dramatic by comparison. Here’s an example of the technique in some of my non-film noir pieces of art: 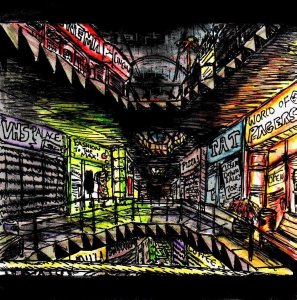 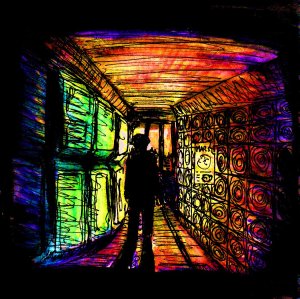 “Derelict Sector” By C. A. Brown 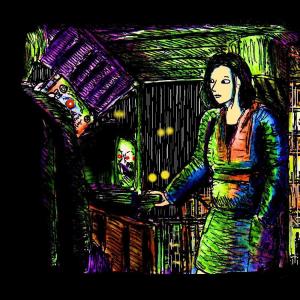 “Scaffolding” By C. A. Brown

4) Monochrome or greyscale?: This is a bit of a tricky question since, although you can make film noir art in colour, it generally tends to look better if it is in monochrome (eg: containing no other colours than black and white) or greyscale (which includes black, white and grey).

Of course, the decision whether to use monochrome or greyscale is up to you. Generally speaking, greyscale tends to give your art more of a “cinematic” look and can also be useful for more subtle lighting. Monochrome, on the other hand, is perfect for harsh lighting and/or more stylised comic-book style art.

Both types of art have their merits and downsides, but if you’re new to making this type of art, then greyscale is easier to get right. Not to mention that, if you want to hedge your bets, you can always make your art in colour – then scan or digitally photograph it – and then remove the colours digitally.

To do this, just make another digital copy of your picture (so that you have a backup), open it in pretty much any image editing program. Then look for an option in your program’s “colours” menu called “hue/saturation” or “hue/saturation/lightness”. Once you’ve found it, then just reduce the saturation level to zero and… hey presto! ….greyscale art!