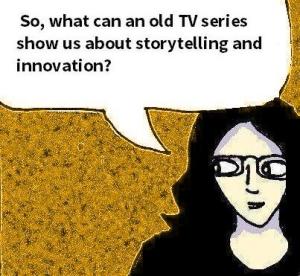 Although I’m busy preparing this year’s Halloween comic, I thought that I’d take a bit of a look at the various storytelling techniques used in a really interesting old TV series called “Columbo” which I’ve been watching on DVD recently.

If you’ve never heard of “Columbo” before, it’s a somewhat unusual American TV series from the 1970s that revolves around a friendly, dishevelled detective called Columbo who solves murders. Although this might sound like the premise of every detective show ever, the series does a number of innovative things, which still stand up fairly well to this day. 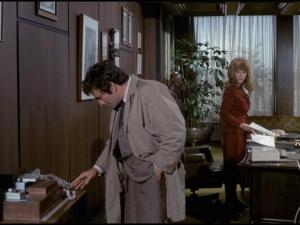 This is a screenshot from “Ransom For A Dead Man” (1971). Although the technology here has aged terribly, the show’s innovative storytelling hasn’t.

The first innovative thing that the series does is to use an unusual structure for each episode. Basically, Columbo doesn’t usually appear until about 10-20 minutes after each episode has started. By this point, the audience has seen the murder (in addition to who did it, why they did it and how they’ve tried to cover it up).

Although this shifts the emphasis of the story to Columbo trying to prove that someone is guilty, rather than trying to work out who did it – it also does something much smarter than this.

It gives the story of each episode context. Since the first 10-20 minutes of each episode is basically a short drama film, we get to see a lot more background and character information than we would do if each episode began with Columbo talking to the characters after the crime had been committed.

Plus, by making sure that Columbo only appears when he would realistically be expected to (eg: after the murder), it takes the focus off of him slightly and he comes across as more of a mysterious character – like how Sir Arthur Conan Doyle mostly just showed Sherlock Holmes from Watson’s perspective. Plus, since each episode begins from the criminal’s “perspective”, this also makes Columbo seem more like a meddling interloper too. It’s a really clever narrative technique!

The second innovative thing that the series does is to use emotional contrast perfectly. Although the series is well-known for Columbo’s friendly personality and rumpled charm (seriously, he’s a really adorable character), it’s much less of a “feel good” series than you might initially think. The emotional tone of each episode’s story is much closer to a film noir, a melodrama or even an old American horror comic than anything else.

The series’ emphasis on ruthless criminals, their motivations (eg: almost always money, infidelity or revenge) and the fact that they seemingly get away with it for large parts of the episode, is much more like a “gritty” film noir or a horror movie than anything else. Yet, instead of the grizzled P.I. or world-weary cop you’d expect to see in a story like this, the main character is more adorable than tough. 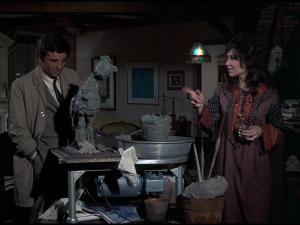 This is a screenshot from Season One of “Columbo” (1971). I don’t know who is more adorable, Columbo or the lopsided sculpture he’s looking at.

This emotional contrast works perfectly since it makes each “side” bolder by comparison. In contrast to Columbo, the criminals seem even more cold, calculating and evil. Yet, in contrast to the criminals, Columbo looks even friendlier and more adorable.

The third innovative thing that the series does is to blend formats perfectly. Unlike many American TV shows from the 1970s-2000s, each episode of “Columbo” is 70-90 minutes long. This means that each episode is more like a self-contained film than a typical TV show episode. In fact, in the episodes I’ve seen so far, the titles of each episode are almost presented like film titles (with only a very brief mention of Columbo, in contrast to the title sequences of most TV shows): 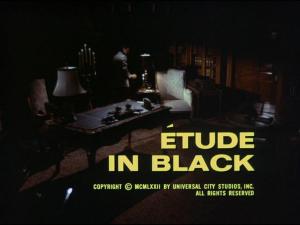 Aside from a brief mention of Columbo in the opening credits, they almost looks like the title credits for a film, rather than a TV show.

Often, the best forms of creativity and innovation come from mixing pre-existing things rather than coming up with entirely new things. For example, the film “Blade Runner” was such an influential and groundbreaking film because it combined the film noir and sci-fi genres. Both of these things already existed, but they hadn’t been combined in such a comprehensive way before “Blade Runner”.

So, by mixing film and television, “Columbo” offers a good example of how creative works can stand out from the crowd just by taking influence from something outside their genre or format.

Although I could probably go on about this show for a while, I’ll conclude this article by pointing out that narrative innovations don’t have to be major, “experimental”, avant-garde, world-changing things.

A lot of the innovative parts of “Columbo” are subtle, structural things that aren’t always even noticeable unless you actually think about them. Yet, without these subtle innovations, this series would just be another run-of-the-mill TV series that would probably be lost to the mists of time by now.