Woo hoo! Here’s the second comic in “Damania Revisited”, a mini series of modern remakes of some of my really ancient “Damania” comics from 2012/13.

Although writer’s block was the main reason for making remakes rather than new comics, I’ve been meaning to make a mini series like this since 2016 (in fact, my revival of the series in that year was originally planned to start with a series of remakes). Still, if you want to catch up on more recent comics featuring these characters, all of the comics made since 2015 can be found here. You can also catch up with comics from this mini series here: Comic One,

Today’s comic is a remake of a comic from 2013 called “Damania – Newsagent” which still made me laugh when I rediscovered it whilst preparing this mini series. 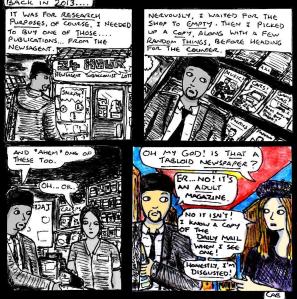