Here’s the sixth (and final) comic in my “Damania Revisited” webcomic mini series. Don’t worry if you missed any of this mini series, I’ll be posting a full retrospective here later tonight. In the meantime, you can find lots of other comics here.

Anyway, today’s comic is a remake of “Damania – Haunted” from 2012. This is one of my favourite older comics, although it was made before Rox first appeared (eg: she didn’t appear for the first time until late 2012), so Roz is more of a retro computer enthusiast in this comic. 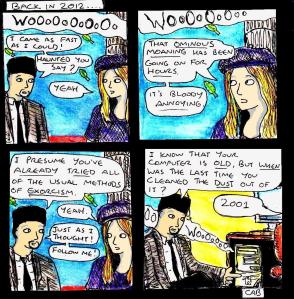