After I read Neal Stephenson’s astonishingly good “The Diamond Age“, one of the first things that I did was to enthusiastically order a second-hand copy of Stephenson’s most famous cyberpunk novel – “Snow Crash” (which was written before, and seems to be set before, “The Diamond Age”). I then… somehow didn’t get round to reading it until a little over a month later. Hence this review.

So, let’s take a look at “Snow Crash”. Needless to say, this review will contain some SPOILERS. 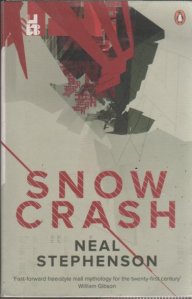 Snow Crash begins in a futuristic version of America that has no real central government. The country consists of lots of small “burbclaves” and “franchulates”, which are territories and outposts of various groups and organisations. And, part-time hacker, katana enthusiast and Mafia pizza delivery guy Hiro Protagonist is barrelling through them at a ridiculous speed in his car because if he doesn’t deliver a pizza within the next few minutes, the Mafia will not be pleased.

However, he is being chased. Not by the police (they don’t exist), but by a “kourier”. A teenaged skateboard-riding courier called Y.T., who works for the RadiKS corporation and gets around by car-surfing using a magnetic harpoon. And she’s just harpooned Hiro’s car. Hiro tries to shake her but then they both run into trouble and Hiro ends up crashing his car. With only a couple of minutes left on the pizza box’s electronic timer, Y.T. agrees to take the pizza. She somehow manages to deliver it on time, which impresses the Mafia.

A few days later, with no car left and his Mafia job just a memory, Hiro focuses on one of his other sidelines, gathering random information for a central database. To do this, he enters the Metaverse – a virtual reality world – but ends up returning to the headquarters of his old hacker buddies. When he enters the virtual building, a random stranger offers him a program called “Snow Crash”. He refuses, thinking that it’s probably just a virus.

After seeing his ex-girlfriend Juanita talk to his old friend Da5id, she warns him about Snow Crash. But, when Hiro talks to Da5id, the conversation turns to Snow Crash since Da5id has a copy of it. Since Da5id’s got more anti-virus software than a pharmacy, he decides to open the mystery program out of professional curiosity. Needless to say, things don’t go well…

One of the first things that I will say about this novel is… wow! This is a cyberpunk novel! Seriously, it’s up there with William Gibson’s “Neuromancer” in the pantheon of great cyberpunk novels. Imagine something like the anime version of “Ghost In The Shell” mixed with “The Matrix”, mixed with Warren Ellis’ “Transmetropolitan” graphic novels… then remember that “Snow Crash” was not only written before these three things (and probably inspired them), but that it’s about three times deeper and more complex too.

This novel is, like Stephenson’s “The Diamond Age”, a novel that respects the reader’s intelligence. However, it is a bit more of an “accessible” novel than “The Diamond Age” is. Even so, you should probably take a few notes and set aside a fair amount of time to read it. But, trust me, it is well worth your while. To call this novel gripping would be an understatement – it is a fast-paced, slick thriller that somehow also manages to be extremely deep and complex at the same time.

But this isn’t to say that this novel is boring. It really isn’t. Seriously, this is one of the few things that I’ve ever seen that can tell a thrillingly action-packed story that would put even the most spectacular modern CGI Hollywood movies to shame (and, remember, it was published in 1992!) whilst also being intelligent enough to have a deeper resonance and impact on your thoughts and emotions than you would expect.

The characters in “Snow Crash” are, in a word, brilliant. Although they are slightly stylised and larger-than-life (the main character is literally called “Hiro Protagonist”!), they come across as unique, interesting people. They’re also not really your typical thriller characters too – or at least they weren’t when this novel was published in 1992, so this novel is a really refreshing read.

Seriously, this novel’s characterisation is economical enough not to get in the way of the story whilst also being deep enough that – for example- you’ll find yourself welling up with tears whilst reading about a cybernetic dog called Fido who only appears in about two or three short scenes.

The writing and narration in this novel is brilliant. Cyberpunk narration typically relies on “information overload” in order to make the reader feel like they’ve been plonked into a high-tech future. This novel is no exception, but it does it in a bit more of a moderate and controlled fashion – and is paired with some brilliantly informal and fast-paced “matter of fact” narration. This informal tone really helps to put the “punk” into “cyberpunk”, whilst also being much more readable than the Victorian-style narration in Stephenson’s “The Diamond Age” too. Seriously, this novel is that wonderful thing – a novel that is easy to read, yet incredibly sophisticated.

Literally, the only criticism I have of the writing in this novel is that it contains a few info-dumps about religions, ancient history etc… which are then concisely summarised in a seven-page segment later in the novel. The info-dump segments can break up the pace of the novel a little bit and it would have been even better if these parts had been left intriguingly mysterious, with the summary providing the reader with the information instead (which would also allow it to serve as a plot twist or a reveal too). Still, this is only a small criticism.

Although the edition of “Snow Crash” that I read is about 440 pages long, don’t let this fool you. This is one of those rare 400+ page novels that more than justifies it’s length. Seriously, it crams more into those 440 pages than many novels would struggle to do in 800. But, although this is a fast-paced, information-overload, adrenaline rush of a novel, don’t expect to blaze through it in a couple of evenings. Even though this novel travels at a hundred miles an hour, the road it travels along is thousands of miles long. But, this is a book that you’ll want to spend lots of time with.

In terms of how this 27 year old novel has aged, it has mostly aged incredibly well. The narration mostly still sounds incredibly fresh, the sci-fi stuff still seems incredibly futuristic and the story is still incredibly gripping. When this novel was first published, it was probably wildly ahead of it’s time. Even now, it still seems fairly modern and/or futuristic for the most part. Literally, the only clues that this novel is 27 years old is are the fact that there are a small number of brief “politically incorrect” moments that probably wouldn’t appear in a more modern novel.

If I had to give it a rating out of five, it would get a very solid five.