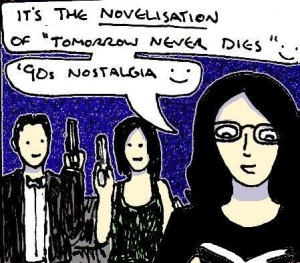 Well, since I haven’t read an action-thriller novel in a while and because I was feeling nostalgic for the 1990s, I thought that I’d check out Raymond Benson’s novelisation of the 1997 James Bond film “Tomorrow Never Dies”.

Although it has been quite a few years since I watched the film that this novel is based on, it is something which holds quite a bit of 1990s nostalgia for me. Seriously, to me, James Bond will always be Pierce Brosnan. So, when I realised that there was a novelisation (that was going very cheaply second-hand online), I just had to read it.

So, let’s take a look at “Tomorrow Never Dies”. Needless to say, this review will contain some SPOILERS.

This is the 1997 Coronet (UK) paperback edition of “Tomorrow Never Dies” that I read.

The novel begins in the Khyber Pass, where a number of international criminals and terrorists are holding a weapons market. Back in Britain, MI6 are keeping a close eye on the proceedings, accompanied by naval officers and a Russian general. After a while, the navy decide to launch a missile at the weapons market, but MI6’s man on the ground – elite agent James Bond – spots a stolen nuclear weapon at the bazaar. With minutes left until the missile hits, Bond has to come up with a daring plan to get nuke out of there and back into the right hands. Needless to say, lots of thrilling action follows.

Sometime later, a British naval vessel is sailing in the South China sea when they are radioed by the Chinese navy and asked to surrender because they have strayed into Chinese waters. However, the GPS still shows that they are in international waters. The Chinese navy launch a couple of fighter planes. However, these are shot down by missiles from an unknown source whilst the British vessel is scuppered by a torpedo-like drilling machine. As the vessel sinks, mysterious divers close in on it and the surviving sailors are gunned down in cold blood.

Needless to say, Britain thinks that China attacked them and vice versa. With the two countries on the brink of war, it is up to James Bond to get to the bottom of things. Meanwhile, the Chinese intelligence services have also dispatched their top agent, Wai Lin, to look into the matter too. Soon, both agents find themselves meeting each other at the launch for the new headquarters of a news organisation called Carver Media Group in Hamburg….

One of the first things that I will say about this novel is that it was really fun to read 🙂 Imagine something like a more efficient Clive Cussler novel (this novel is a lean and efficient 213 pages long 🙂 ) that has a bit more of a traditional British thriller-style atmosphere. Seriously, I actually prefer this novel to what I can remember of the film. It keeps the classic 1990s James Bond atmosphere whilst also telling a story that is much more suited to the page than the screen.

A lot of what makes this adaptation work so well is that – compared to what I can remember of the film – there’s a lot more depth and a bit more grittiness. Not only do we get to learn a lot more about the history of all of the characters (including the sordid histories of many of the villains), but this novel also takes advantage of the fact that it doesn’t have to pass a film censor in order to inject a bit more impact and intensity into the film’s action scenes. Plus, a lot of the film’s more comedic moments translate to the page fairly well too 🙂

Plus, the novel’s story is also fairly close to what I can remember of the film. The only major story differences that I noticed were that when Bond and Wai Lin are captured by the main villain, he doesn’t give a speech about chakras when he threatens to torture them. Likewise, there’s a small sub-plot about James Bond learning Danish that I don’t remember seeing in the film. Still, if you’ve seen the film more recently, then you’ll probably be better at spotting story differences than I am.

In terms of the narration in this novel, Benson’s third-person narration works fairly well. The narration is, as you would expect, a little bit more formal and descriptive than more modern action-thriller novel narration is – but it is still very readable and reasonably fast-paced. Likewise, Benson is really good at translating cinematic action scenes to the page in a way that isn’t too confusing either.

In terms of the pacing and characters, this novel excels itself 🙂 As I mentioned earlier, all of the characters get a lot more depth and backstory when compared to the film. Plus, this novel manages to cram a full, self-contained thriller story into 213 pages 🙂

Given how long a lot of thriller novels from the 1980s/90s onwards tend to be, it is so refreshing to see a thriller novel that is so lean and efficient. Yet, it never feels like the novel is abrupt or rushed either. Not only does Benson tell a gripping, concise story – but he also has time for a few brief 1-2 page descriptive segments about history, food etc.. too. Seriously, I miss the days when paperback novels could be this short 🙂

In terms of how this twenty-two year old novel has aged, it has mostly aged well. In other words, although there are a few descriptions, plot elements and moments that will seem cringe-worthily dated when read these days, this novel mostly reads like a wonderful piece of 1990s nostalgia. Plus, as I mentioned earlier, the narration is a little bit formal by modern action-thriller novel standards, but still very readable.

All in all, this is a brilliant film novelisation. It isn’t merely a re-telling of the film, but an expansion of it. It adds a bit of extra depth, grittiness and intensity to the film, whilst still retaining everything that makes the film so wonderfully gripping and cheerfully nostalgic. So, if you miss the days when Pierce Brosnan was James Bond and/or you want some 1990s nostalgia, then this novel is worth checking out. If you’re a fan of Clive Cussler, you’ll like this novel too. Likewise, if you want a good short thriller novel, then this one might be worth looking at too.

If I had to give it a rating out of five, it would get at least a four.