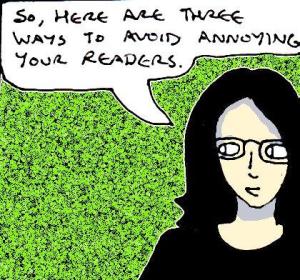 Still, I’ve also seen stories that contain things that should annoy me but somehow don’t because of clever writing. So, I thought that I’d offer a few tips for how to reduce some of the more common types of story problems.

1) Cliffhangers – Less Is More!: Yes, if you’re writing a continuous series, then a dramatic cliffhanger ending can be a good way to keep your readers excited for the next instalment.

However, from the reader’s perspective, there is nothing more frustrating than reading a dramatic story only for it to suddenly end on a cliffhanger. Not only can it feel disappointing, but it can also feel slightly manipulative too (eg: your readers feel like they’re being forced into reading the next book).

So, how can you include the dramatic suspense of a cliffhanger ending without leaving your readers feeling cheated or manipulated? Well, it is all to do with scale.

Simply put, the best cliffhanger endings I’ve seen (such as in some instalments of Jocelynn Drake’s “Dark Days” series) will often be relatively small in scale, whilst also offering some sense of resolution too.

By keeping the cliffhanger relatively small and/or in the background, the reader still gets the satisfaction of a resolved storyline in addition to an intriguing, but less overbearing, cliffhanger ending.

Likewise, another thing that helps to soften the blow of a cliffhanger ending is good signposting. In other words, label your story as “part one of…” or whatever, so that the reader doesn’t go into the story expecting a full, self-contained story. After all, a lot of cliffhanger-based frustration happens when readers are led to expect a full story, only to suddenly discover that they’ve only got part of a longer story.

However, the novel I’m reading at the time of writing (“Patient Zero” by Jonathan Maberry) actually manages to handle frequent switches between first and third person perspective reasonably well, in a mostly non-frustrating way.

But, how does Maberry do it? First of all, the title of each chapter includes a small segment that tells you where the events of the chapter take place (which also tells you which character or characters it will involve). Although this might seem like it’s stating the obvious, the fact that the reader doesn’t have to spend the first few paragraphs of each chapter working out what is going on keeps the story flowing reasonably well despite the frequent changes between first and third person narration.

Secondly, and most importantly, the narrative voice in both the first and third person segments of the novel is reasonably consistent too.

In other words, there aren’t huge stylistic changes between the two types of narration. Although this might seem like it would make the story bland, it actually makes it much more readable – for the simple reason that it doesn’t break the “flow” of the story too much. The switches between first and third person narration are reasonably seamless, since the writing style in both is fairly similar.

But, of course, it’s usually a good idea to stick to just using third-person narration if you want to focus on multiple main characters in multiple locations.

3) Slow Pacing – Distinctiveness And Interest!: Not every novel has to be an ultra-fast unputdownable page-turner. Sometimes there are valid reasons for a writer to do things a bit more slowly. And, whilst it goes without saying that slow pacing should only be used when it is actually a necessary part of the story, how can you keep your reader’s attention during the slower parts of your story?

First of all, give them a reason to keep reading! Whether it is an intriguingly strange or mysterious premise, or possibly even a feeling of suspense or curiosity, you need to make sure that your reader has a good reason to keep reading a slower story. In other words, there has to be some kind of dramatic payoff for all of the slow storytelling and/or something to hold the reader’s interest when your story slows to a crawl.

Secondly, make your story distinctive. If you include things like an interesting narrative voice, atmospheric settings, fascinating characters, clever descriptions, a sense of humour etc.. then your readers won’t care too much about the slow pacing for the simple reason that they’ll be too busy enjoying your writing. In other words, if a story is well-written enough, then a slow pace will actually give the reader more time to enjoy the good writing. So, make sure that the slow-paced parts of your story are well-written!