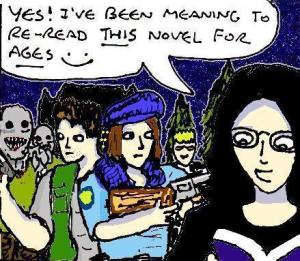 Well, a while after I finished the previous novel I’d reviewed, I was still in the mood for some relaxing literary comfort food. Naturally, my thoughts turned back to an old favourite of mine that I’ve been meaning to re-read for ages. I am, of course, talking about S.D.Perry’s 1998 novel “Resident Evil: The Umbrella Conspiracy”.

This is a novel that I first discovered when I was about thirteen or fourteen and, along with classic 1980s splatterpunk horror novels like Shaun Hutson’s “Erebus“, it showed me how utterly awesome novels can be 🙂 Yes, I’d read other novels before then, but these old 1980s/90s horror novels were the things that really got me interested in reading (and writing too).

Not only that, S.D.Perry’s “The Umbrella Conspiracy” (and it’s sequels) were based on the classic “Resident Evil” games – which were one of my favourite computer/video game series at the time. Perry’s novels were everything that my younger self had really wanted these slow-paced, atmospheric survival horror games to be – fast-paced, ultra-gruesome, pulse-pounding thrillers.

So, yes, this novel made quite an impression on me when I was younger 🙂 But, I was curious to see how I’d react to it now that I actually am one of the “mature readers” which the patronising content warning on the back cover recommends the book for.

So, let’s take a look at “The Umbrella Conspiracy”. Needless to say, this review may contain SPOILERS.

This is the 1998 Pocket Books (US) paperback edition of “Resident Evil: The Umbrella Conspiracy” that I re-read 🙂

The novel begins in the near-future year of 1998 (the original videogame came out in 1996), with a series of newspaper reports describing a series of mysterious grisly deaths in the forests surrounding the American city of Racoon City. The reports speculate that cannibals or wild animals are behind the horrific killings.

With mounting concern about the deaths, the local police chief authorises the force’s elite special tactics units (“S.T.A.R.S”) to go in and investigate. But, when Bravo team loses radio contact with HQ, S.T.A.R.S leader Albert Wesker decides to send Alpha team into the forest. As their helicopter gets closer to the forest, they notice a pall of smoke from a crashed helicopter. Bravo team’s helicopter!

After landing near the crashed chopper, Alpha team notices that it is completely abandoned. During a search of the surrounding woodland, Alpha team soon find the dismembered remains of one member of Bravo team. But, seconds later, they are menaced by ferocious mutant dogs. Fleeing for their lives, Alpha team find a disused mansion and take shelter inside. But, far from being a sanctuary, they have unknowingly entered the world of survival horror…..

One of the first things that I will say about this novel is that, even though I’ve read it before and even though I’m very familiar with the game it’s based on, it was still just about gripping enough for me to read all of it within a single day. Yes, this novel will be more suspenseful and dramatic if you haven’t played the game. But, even if you know everything about the story, then it’s still a fairly atmospheric and gripping novel.

And, although this novel isn’t that scary, it’s still a brilliant horror novel. Not only do the earlier parts of the novel build up ominous suspense quite well, but the novel’s creepy mansion setting also has the kind of gloomy, claustrophobic atmosphere that you would expect too. Plus, as mentioned earlier, this novel turns the gruesome elements of the source material up to eleven – giving this novel the macabre, vicious and grisly atmosphere that the original game lacked somewhat.

Likewise, this novel works really well as a thriller novel too. Since the main characters quickly find themselves separated when they enter the mansion, this allows the novel to jump between different areas and include lots of mini-cliffhangers. In addition to this, the main characters are frequently menaced by an assortment of zombies and mutant monsters, which gives the story much more of an action-packed feel. This fast-paced combat is also expertly contrasted with slower moments of puzzle-solving, suspense and characterisation too. Seriously, this is a thriller novel 🙂

As for how good an adaptation it is, it’s a really great one. Since “Resident Evil” is more of a story/puzzle/exploration-based game than an action game, it translates really well to a novel format – with Perry also being able to expand on all of the characters’ backstories in a way that really makes you care about them.

In addition to this, the novel also cleverly interweaves the game’s two campaigns (Jill’s campaign and Chris’ campaign), allowing the story to include many of the best moments from both of them. Plus, a few of the game’s signature lines of dialogue/text (eg: “You were almost a Jill Sandwich”, “…pecked to death by crows”, “Itchy. Tasty” etc…) also make an appearance too 🙂

The novel also takes a few interesting creative liberties which really help to keep the reader on their toes too. Not only does a mysterious new character called Trent (who is expanded upon more in Perry’s “Resident Evil: Underworld”, if I remember rightly) make a couple of cryptic appearances, but there are also a few amusing moments – such as Jill taking a much more common sense attitude towards a few of the game’s contrived puzzles (eg: just shattering the glass in the statue room, just climbing down the outdoor lift shaft etc..) too.

As for the writing, it’s really good. Perry’s third-person narration strikes just the right balance between being atmospherically descriptive and grippingly fast-paced. It’s written in a fast-paced, informal “matter of fact” way that allows you to blaze through the whole thing in a single day – but there’s enough description and formality to really give the story a sense of depth (compared to the game). In classic splatterpunk fashion, many of the novel’s most elaborate descriptions are also often reserved for moments of grisly, grotesque horror too 🙂

In terms of length and pacing, this novel is really great 🙂 Not only is it an efficient 262 pages in length, but the novel’s pacing is utterly brilliant too – with a really good contrast between fast-paced action scenes and slower moments of suspense and characterisation. Seriously, even if you know the story by heart, then this novel is still fairly gripping.

As for how this twenty-one year old novel has aged, it’s aged really well. Yes, there are a few obviously “90s” elements (such as a “futuristic” PDA that is more primitive than a modern smartphone) but, for the most part, this novel has lost none of it’s atmosphere, intensity and drama. Plus, of course, if you’ve played the original “Resident Evil” game, then this novel is a wonderful nostalgia-fest too 🙂

All in all, this novel is an absolutely brilliant adaptation of “Resident Evil” 🙂 If you’ve never played the game, then the story will be a lot more suspenseful. If you have played the game, then this novel is a deeper, more expanded and more intense version of a familiar story 🙂 Regardless, it’s a wonderfully gripping horror thriller novel. Yes, whilst it didn’t quite evoke the feeling of wide-eyed awe that I felt when I read this novel for the very first time, it’s still a very gripping and well-written novel.