Well, since I’m still reading the next novel I plan to review (“Bring Up The Bodies” By Hilary Mantel), I thought that I’d take the chance to review another “Doom II” WAD, since it’s been about three weeks or so since my last WAD review.

So, after clicking on the “Random File” button on the /idgames Archive Database a few times, I ended up finding a WAD from 2006 called “Unruly Evil“.

As usual, I used the “ZDoom” source port whilst playing this WAD. Since it seems to be designed specifically for ZDoom, I don’t know how well it will work with other source ports (although I guess that ZDoom-based source ports, like GZDoom, might possibly be ok).

“Unruly Evil” is a short to medium length single-level WAD which includes a few new features/mechanics.

It also, for some bizarre reason, takes up the Map 28 slot – so, when you start the game, you’ll have to type “IDCLEV28” to skip to this level (or play through the first 27 levels of “Doom II” or “Final Doom”) before you can get to this level. 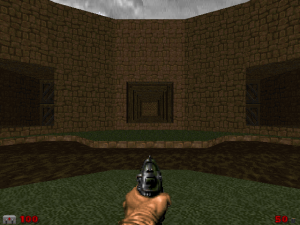 Yes, if you see something like this, just type “IDCLEV28”. And, yes, I’m using “Final Doom” (because “The Plutonia Experiment” is awesome 🙂 )

One of the first things that I will say about “Unruly Evil” is that, according to the accompanying text file, it was apparently made as a tech demo to show how a level editor called “DCK 3.62” can use some ZDoom-specific features. And, as a tech demo, it’s pretty cool. But, as a level, it isn’t really that great.

Ok, it has some good moments but, on the whole, it’s kind of… meh.

The main features that this WAD shows off include enemies that can turn invisible, in-game text and underwater areas (with an accompanying oxygen mechanic). For the time that this WAD was released, I can see how they would have been fairly impressive. However, whilst it’s neat that this level shows all of this stuff off, it does ruin the gameplay somewhat.

For starters, the enemies that can phase in and out of visibility at will are an impressive feature. However, they are more than a little bit frustrating, due to the fact that they can suddenly pop up out of nowhere without warning. Whilst this does add a little bit of extra challenge and tension to the level, the way it is implemented (eg: with no spectre-like silhouettes when the monsters are invisible) can come across as a cheap, annoying and unfair way of adding difficulty.

Likewise, the in-game text is a rather cool feature. However, it often relays obvious instructions to the player – which can come across as patronising at times. And, when combined with the reasonably linear design of the level, this makes the level feel less like a “Doom II” level and more like a caricature of a more modern FPS game. Still, this text is used in a rather interesting end-level cinematic… which then crashed ZDoom after it had finished.

However, the dark blue text used here is kind of difficult to read against the gloomy background. The bright yellow text in the rest of the WAD would have been a better choice.

Finally, the underwater area is kind of a neat addition. Still, given that most “Doom II” levels with underwater areas don’t include an oxygen mechanic, expect to get caught out by this when you venture into this area for the first time. 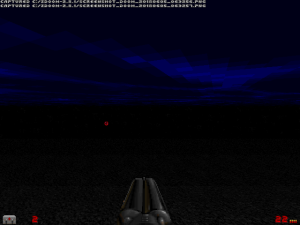 The Doomguy can drown? But what about that spacesuit/oxygen mask that he usually wears?

The level itself is, as I mentioned, somewhat linear (with only a few non-linear elements) and there are a few moderately challenging elements- such as a couple of enjoyable small-medium size arena fights (which, to the level’s credit, feature a Cyberdemon and an Arch-vile).

On the plus side, this is one situation where the in-game text is actually kind of epic.

The level is both generous and stingy when it comes to heath too. Although there are a reasonably number of health packs near the beginning of the level, I didn’t really find many in the later parts. And, since your health is likely to be low during the later parts of the level, the sudden appearance of invisible enemies can result in a frustrating insta-death occasionally.

All in all, this is a pretty cool old tech demo. But, when seen on it’s own merits as a level, it isn’t that great. It’s linear and frustrating. Even so, it’s a cool glimpse into the history of “Doom II” modding, source ports etc…

If I had to give it a rating out of five, it would get two and a half for the level design but four for the features.