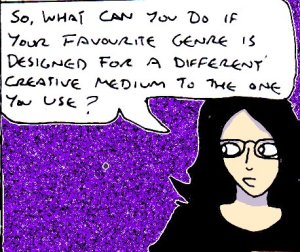 Although this is an article about writing fiction, making art and making comics, I’m going to have to start by talking about videogames for a while. As usual, there’s a good reason for this that I hope becomes obvious later.

A while before I wrote this article, I ended up doing some random online research about survival horror videogames on handheld games consoles during the 1990s. Interestingly, this awesome genre turned out to be very difficult to transfer to older handheld consoles – with one of the best examples actually being a game that wasn’t officially released. Namely the unfinished late 1990s/early 2000s Game Boy Color version of “Resident Evil”.

Needless to say, all of this made me think about the annoying situation where your favourite genre only really works in another medium. Whether you’re a writer who loves heavy metal music, a comic-maker who loves FPS videogames etc.. it can be more than a little bit annoying.

So, I thought that I’d offer two basic tips about what to do if you find yourself in this incredibly annoying situation.

1) Look at what makes the genre “work”: If you can’t directly use an awesome genre in your chosen medium, then one way to get around this is simply to look at what underlying qualities, features and techniques make the genre in question “work”. Once you’ve made a list of these things, then it’s considerably easier to apply them to other mediums.

As you can see, these are all qualities that could easily translate well into either prose fiction or art/comics without too much difficulty. So, even if you can’t include any actual heavy metal music in these things, you can still use all of the underlying features and techniques of the genre.

So, looking for underlying qualities/techniques is one of the best ways to use an awesome genre in another medium when you can’t do so directly.

2) Visual media: Simply put, it’s really easy to translate one visual medium to another. This is mostly because all visual media are, well, visual. So, learning how to study and analyse images (and having a bit of knowlege of artistic theory) means that there’s a lot easier to, say, make art that is inspired by things like films and videogames.

For example, many classic survival horror games and old 2D “point and click” adventure games will often use fixed ‘camera angles’ that are designed to look suspenseful. This will often be done by either placing dramatic-looking things in the close foreground and/or using camera angles that look like they are “lurking” somewhere or perching ominously above the player. As such, it’s easy to include elements of survival horror etc.. in artwork: 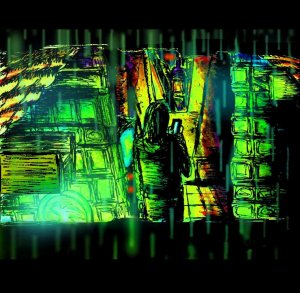 “Cyberpunk Ruins” By C. A. Brown

So, if you’re working in a visual medium, then learning how to study images (eg: how to look for things like perspective, colour schemes, lighting etc..) is an incredibly valuable thing if you want to translate some of your favourite genres into your medium of choice.

Anway, I hope that this was useful 🙂