Well, it’s been a while since I last wrote an art-based article and, since I’ve returned to making more imaginative art (on a semi-regular basis, at least), I thought that I’d look at a few things that old survival horror videogames can teach artists. Although I’ve almost certainly talked about this topic before, it’s always worth returning to.

If you’ve never heard of survival horror videogames before, they were a genre of horror videogame that was popular during the 1990s and the early-mid 2000s. They were games that used a third-person perspective and had slightly more of an emphasis on exploration, atmosphere, storytelling and/or puzzle-solving than on combat.

And, if you take artistic inspiration from them, you can make dramatic art that looks a bit like this upcoming digitally-edited painting of mine: 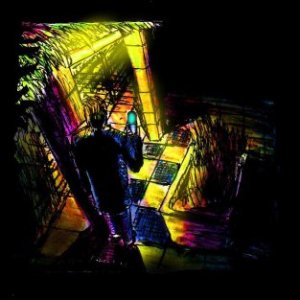 This is a reduced-size preview. The full-size painting will be posted here on the 25th June.

So, what can old survival horror videogames teach us about making art?

1) Perspective and composition: One of the interesting things about survival horror games from the 1990s is that, due to technical limitations, they would often use pre-made 2D backdrops rather than actual 3D locations. What this meant was that the game’s “camera” had to remain in a fixed position in each location (since the background was actually a 2D image). Yet, this technical limitation proved to be one of the best parts of these games. But, why?

Simply put, game designers of the time had to use this limitation to their advantage. In other words, they had to use perspective and composition in interesting and dramatic ways. Here’s an example from “Resident Evil 3” to show you what I mean:

Notice how the “camera” lurks far away from the main character, creating a sense of both impending danger and of being an insignificant part of a large uncaring world. Likewise, notice how some dramatic flames and burning pieces of wood have been placed in the close foreground, adding depth to the image and also “framing” the image slightly. All of these things were conscious creative decisions that give this moment in the game a little bit more atmosphere.

In other words, old survival horror games can teach us that both perspective and composition are integral parts of any painting or drawing. When used creatively, they can add instant visual interest and atmosphere to a piece of art.

2) Altered familiarity: If there’s one thing that made old survival horror games so eerily dramatic, it was that they would often take familiar locations and turn them into something a bit more dark and twisted. This contrast between the familiar and the unfamiliar is designed to evoke something that Sigmund Freud called “The Uncanny” and it not only adds instant atmosphere, but it also allows for a lot more visual creativity too.

In addition to the post-apocalyptic settings of “Resident Evil 3”, one of the best examples of this can be found in another horror sequel called “Silent Hill 3“. This is a game that will often take familiar locations (eg: subways, shopping centres, hospitals etc..) and turn them into something eerily terrifying. Here’s an example: 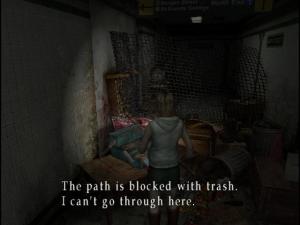 In this scene from “Silent Hill 3”, an ordinary location (a subway corridor) is turned into something much creepier through the addition of things that you wouldn’t expect to see in this location. The incongruous piles of old junk not only evoke a feeling of dereliction and decay, but they also present a menacing barrier to the player too. Likewise, some faded/dried blood spatter on the wall also helps to add to this sense of menace too.

So, if there’s another thing that old survival horror games can teach artists, it is to be a bit more creative with “familiar” locations. Whether you’re trying to add a sense of ominous horror to your artwork or whether you just want to add some quirky and comedic stuff to your art, don’t be afraid to be a little bit creative with “familiar” locations.

3) The lighting: You knew I was going to mention this. But, it’s worth mentioning anyway. If there’s one visual feature that really makes old survival horror games stand out from the crowd, it is the lighting.

In order to create a dramatic atmosphere, these games were usually either set at night or in gloomy locations of one kind or another. What this meant is that the designers could use lighting creatively. Not only do the dark backgrounds make the lighting stand out even more but it also means that the lighting can be used to draw the player’s attention to particular areas of the picture. Here’s an example from “Resident Evil 2”:

Notice how most of the foreground is shrouded in shadows, yet the stairs and the corner of the walkway are brightly lit. Not only does this add some visual interest to the picture, but the player is also quite literally being invited to “go into the light”, since the area you’re supposed to walk to (eg: the end of the walkway) is the most brightly-lit part of the picture.

So, what can we learn from this? Simply put, in addition to making sure that 30-50% of the total surface area of your picture is shrouded in gloom (so that the lighting looks more vivid by contrast), it also reminds us that lighting should be used to direct the audience’s attention towards interesting or important parts of the picture.