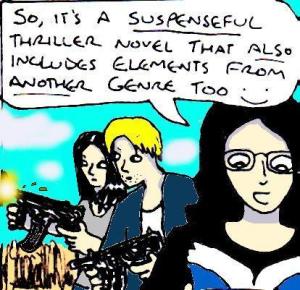 Well, although I’d originally planned to read a noir cyberpunk novel, the weather had become so hot that I needed to read something a bit more fast-paced instead. So, after looking through my “to read” pile, I found a copy of Lee Child’s 2015 novel “Make Me” that a relative had found in a charity shop several years ago and thought that I might enjoy.

So, let’s take a look at “Make Me”. Needless to say, this review may contain some SPOILERS. I’ll avoid spoiling the exact details of the ending, but expect spoilers about the style and genre of the ending.

This is the 2015 Bantam Press (UK) hardback edition of “Make Me” that I read.

The novel begins at night in a farming town in Oklahoma called Mother’s Rest. In a field outside of town, a group of people are burying a dead man called Keever. However, before they can finish their grim task, a train whooshes past the field.

A wandering ex-military policeman called Jack Reacher decides to get off of the train at Mother’s Rest because he is intrigued by the town’s unusual name. However, no sooner has he set foot on the platform, he is accosted by a mysterious woman who initially mistakes him for someone else. After they go their separate ways, Reacher decides to spend the night in the town’s only motel. Little does he know, someone is watching him….

The next morning, he stops off in the local diner for coffee and meets the woman from the train station again. She’s an ex-FBI private detective called Michelle Chang who has travelled to the town after her colleague, Keever, requested urgent backup. Apparently, Keever was going to explain his current case to her when they met, but he hasn’t shown up in town. So, Reacher decides to help her investigate…..

Although the novel certainly contains some dramatic action-thriller elements, this is one of those ultra-suspenseful stories where you’ll keep reading because you want to find out what is really going on. And when you do find out the horrifying truth, you’ll wish that you hadn’t…

The novel’s suspense elements are absolutely brilliant! In addition to an intriguingly ominous mystery, the story also makes use of suspense in all sorts of other clever ways too.

Whether it is the segments showing the bad guys spying on the main characters, the way that a news report plays in the background of one scene, the fact that both sides plan their dramatic final showdown very carefully or even how the fight scenes will sometimes contain long descriptions of gun mechanisms in order to ramp up the tension before a shot is fired, this novel is saturated with suspense and it works really well 🙂

Even though this novel is much more of a suspense thriller than an action thriller, there are still some dramatic fight scenes. These are spread out carefully throughout the novel, so that they seem extra dramatic in contrast to the more understated scenes beforehand. If you’ve read a Lee Child novel before, you’ll know that he’s an expert at writing fight scenes and this story is no exception.

Plus, unlike in Child’s “The Midnight Line“, Reacher certainly isn’t a pacifist in this story. Likewise, he actually suffers a concussion at one point, which makes some of the later fight scenes even more suspenseful (since he’s also fighting the effects of the concussion too).

To my surprise, this novel also contains some really well-written horror elements too 🙂 This is a story that gets more horrific as it goes along, going from ominous to creepy to disturbing to full-on horror in a way that you won’t see coming until it is too late.

Although a lot of the most grisly elements of the story’s shocking final twist are left to the reader’s imagination (since this is a thriller novel, rather than a splatterpunk novel) this story delivers a devastatingly disturbing dose of horror that can really catch you off-guard.

Likewise, all of this horror is complemented by a deliberately unsettling tone throughout the story. Whether it is the fact that the main characters are being watched, the mysterious nature of the mystery they’re trying to solve or even some lengthy discussions of some fairly dark subject matter, this novel sets up it’s shocking final moments of horror absolutely perfectly. Or, more accurately, it fools you into thinking that you’re reading an ordinary suspense thriller story until it is too late…..

In terms of the characters, they’re reasonably good. Although there isn’t a gigantic amount of ultra-deep characterisation, there is enough characterisation here to make you care about the main characters and for the slightly understated romantic sub-plot between Reacher and Chang to work fairly well. Surprisingly, the most dramatic characters in this novel are probably a few of the villains, who are probably some of the most chillingly evil villains that I’ve ever seen in a novel.

In terms of the writing, this novel’s third-person narration is really well-written. The narration is “matter of fact” enough to keep the story grippingly fast-paced, but isn’t afraid to pause for more complex descriptions when the story requires it. In other words, if you’ve read Lee Child novels before, then you’ll probably be quite familiar with the writing style here.

In terms of length and pacing, this novel is fairly good. Although this novel is a slightly lengthy 421 pages long, this is counterbalanced by the fact that this is one of those compelling stories that you’ll probably want to binge-read fairly quickly.

Plus, although this fast-paced thriller isn’t always quite as fast-paced as you would expect, this allows the story to build suspense and to make the even faster-paced moments stand out even more in contrast.

All in all, this is a brilliantly compelling thriller novel that is also a horror novel in disguise 🙂 It makes expert use of suspense, plot twists and all of that kind of stuff and it is the kind of story that is difficult to put down once you’ve started reading it.

If I had to give it a rating out of five, it would get at least four and a half.