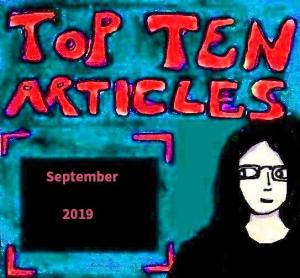 Well, since it’s the end of the month, I thought that I’d do my usual thing of collecting a list of links to the ten best articles about writing etc.. that I’ve posted here over the past month. As usual, I’ll also include a couple of honourable mentions too.

Unfortunately, due to being very busy at the time of writing many of this month’s articles (in addition to suffering from a fairly heavy cold for a few days), the quality varied somewhat. But, on the bright side, there are more articles about the horror genre than usual, mostly thanks to the fact that I was reading a few horror novels and was also preparing last year’s Halloween stories at the time too.

In terms of book reviews, I ended up reviewing fourteen novels this month and my favourites were probably: “The Skin Palace” by Jack O’Connell, “Day Four” by Sarah Lotz, “The Deep” by Nick Cutter, “Universal Harvester” by John Darnielle and “And The Rest Is History” by Jodi Taylor.