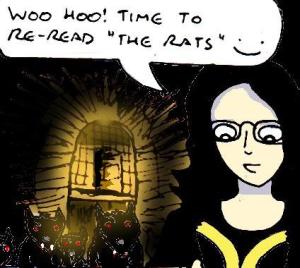 Well, for the next novel in this month’s horror marathon, I thought that I’d re-read an influential novel in the history of modern horror fiction. I am, of course, talking about James Herbert’s 1974 novel “The Rats”.

In addition to being the forerunner of the splatterpunk genre, it also sparked something of a trend for stories about giant vermin in British horror fiction during the late 1970s and the 1980s, with novels like Shaun Hutson’s “Slugs” novels, Michael R. Linaker’s “Scorpion“, Richard Lewis’ “Devil’s Coach-Horse” and Guy N. Smith’s “Crabs” novels all taking inspiration from “The Rats”.

Like pretty much everyone who has read “The Rats”, I first read it when I was about fourteen or so. I also read the two sequels (“Lair” and “Domain”) around that time too. But, although I had thought about re-reading “Domain” (seriously, it’s almost as bleakly terrifying as “Threads“), I’d been meaning to re-read “The Rats” for ages.

So, let’s take a look at “The Rats”. Needless to say, this review may contain some SPOILERS.

This is the 1991 New English Library (UK) paperback reprint of “The Rats” that I read.

The novel begins with a brief and ominous description of an abandoned house in London. Then, the novel tells the tragic tale of a man called Henry Guilfoyle who was driven out of his office job by homophobic bullying from his colleagues after they found out about his relationship with one of the new hires called Francis. Driven to alcoholism by this harrowing experience, he eventually becomes homeless and, after getting drunk on a bottle of cheap gin, is devoured by giant rats.

After this, the story mostly focuses on an art teacher called Harris who grew up in East London and has decided to teach there, despite the area’s rough reputation. After trading witty repartee with his rowdy class, he happens to notice something wrong with one of the troublemakers – he has been bitten by a rat…

One of the first things that I will say about this novel is that, whilst it does show it’s age, it’s still a surprisingly compelling and horrific story. In a lot of ways, it is more reminiscent of a disaster movie or possibly even late 19th/early 20th century “Invasion Literature” novels than anything else. The mid-late parts of the story were also much more of a fast-paced thriller than I remembered too 🙂

In terms of the novel’s horror elements, they are really well-written. Whilst this novel isn’t quite as gory as the later splatterpunk novels of the 1980s, it’s still surprisingly grisly and/or shocking for the time it was written. This is mostly because of the focus on the vicious cruelty of the flesh-eating rats and the vulnerability of many of their victims (eg: babies, puppies, children, homeless people etc..).

This gory horror is also paired with other types of horror like monster horror, medical horror, suspenseful horror, atmospheric horror and economic horror. This is a grim, gritty novel that is mostly set in the overlooked poorer parts of 1970s London, where WW2 bomb sites still lay unrepaired, where slums were replaced with impersonal council flats and where no-one really cared about the many homeless people.

To add to the horror, there are a lot of short side-stories and vignettes showing the rats attacking random people, which lends the novel a much grander sense of scale. This is, of course, a technique which would later go on to be used in many 1980s splatterpunk novels. Likewise, whilst authority is shown to be competent sometimes, there’s enough criticism of it to see where the splatterpunk genre got it’s “punk” elements from. As I said, this novel was pretty influential.

Earlier, I likened this novel to a thriller or a disaster movie and this is one of the most surprising parts of the story. Although it is a little slow to get started, it contains numerous suspenseful and/or fast-paced scenes that still remain gripping to this day. The focus on the official response to the giant rats and the occasional pitched battle with them make this novel more thrilling than you might expect.

In terms of the characters, they’re interesting. Although Harris is a fairly ok protagonist, the novel’s characterisation is at it’s very best when Herbert is describing many of the random people who get devoured by rats. Many of these people either live drearily ordinary lives or have tragic backstories and this really makes you care about what happens to them.

In terms of the writing, it’s really good. Although the novel’s third-person narration does contain some hints of a more formal and old-school style, a lot of the novel is written in a surprisingly fast-paced and “matter of fact” way. This seamless mixture of styles works really well, since it adds atmosphere to the story whilst also keeping the story fairly gripping and/or gritty when it needs to be.

In terms of length and pacing, this novel is fairly good. At a gloriously efficient 186 pages in length, this novel makes me pine for the days when novels were expected to be short 🙂 Likewise, whilst the earlier parts are relatively slow-paced and suspenseful, the story picks up the pace and becomes a much more grippingly fast-paced novel than you might initially expect 🙂

In terms of how this forty-five year old novel has aged, it both has and hasn’t aged well. Yes, there are a few awkwardly dated moments but, on the whole, there are less of these than I’d expected from a 1970s novel. Plus, although the opening chapter is clearly set in a more narrow-minded age, it hasn’t aged quite as badly as you might expect, thanks to Henry being a reasonably sympathetic – if tragic- main character in this chapter. Yes, this chapter hasn’t aged 100% well, but – for a 1970s novel – it’s nowhere near as bad as it could have been.

The story’s thriller and horror elements have aged absolutely excellently though and this novel is still as grippingly compelling and horrific as it probably was in 1974 🙂 Not only that, the grim run-down 1970s setting of the story also helps to add to the horror too.

All in all, this is a compelling and influential horror novel. Yes, it’s a bit dated at times, but it is still a surprisingly gripping, atmospheric, suspenseful and horrific horror thriller novel that retains a lot of it’s drama and power to shock. If you like disaster movies, enjoy the splatterpunk fiction of the 1980s or just want to see why so many other 1970s/80s horror novels included plagues of giant creatures, then read this book. Yes, the lesser-known third novel in the series (“Domain”) is much scarier, but this novel is still a horror classic.

If I had to give it a rating out of five, it would just about get a five. After all, it’s “The Rats”. I can’t give it any less than this.

2 comments on “Review: “The Rats” By James Herbert (Novel)”