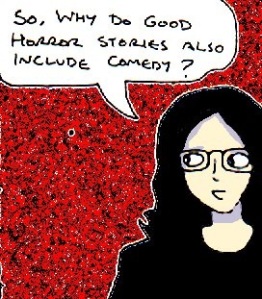 Well, although I’ve talked about the topic of comedy in horror fiction before, I thought that I’d return to it today after I started reading a horror novel from the late 1950s called “The Haunting Of Hill House” by Shirley Jackson (mild SPOILERS ahoy).

Although the novel starts in a fairly sombre, ominous and morose way, and I’d worried that reading it was going to be an extremely miserable experience, there is a surprising amount of comedy in the first half of the novel. Most of this consists of amusingly irreverent dialogue, quirky characters, dark comedy and even some hilariously obscure literary humour (eg: a reference to how Samuel Richardson’s 1740 novel “Pamela” is, as I can personally remember from my university days, dull enough to quite literally send the reader to sleep).

Yet, this comedy compliments the novel’s horror elements really well. It slightly tempers the ominous bleakness of the story, whilst also coming across as a disturbing sign that the characters are trying to protect their sanity when faced with the prospect of living in a creepy old house. After the unsettling early parts of the novel, the first moments of humour are brilliantly unexpected and can really catch you off-guard. Not only that, all of the humour seems to be a natural product of the characters and the setting, which allows it to fit in with the rest of the story really well.

But, why is it there in the first place? Why do horror novels often include moments of comedy? After all, the two genres are supposed to be complete opposites.

Well, there are quite a few reasons for this (that I’ve mentioned in previous articles), including how both genres rely on similar techniques, how it adds personality to the story, how the contrast between horror and comedy heightens the impact of both things, how it shows the reader that the author is a fan of the horror genre (to the point where they can joke about it) and because “100% horror 100% of the time” makes the reader feel jaded and less easy to scare.

But, the most important reason is probably to do with the emotional tone of the story. In short, adding a bit of comedy to your horror story tells your reader that they can’t be certain of what to expect. After all, horror stories are traditionally grim, sombre and bleak things that are filled with misery, death and other such things. So, including a bit of comedy tells your reader “Nope. This isn’t one of those stories.” It tells them that this is a different type of horror story.

Although this probably worked better in older horror novels (I mean, I was genuinely surprised that a horror novel from the 1950s could be funny), it is still effective in modern horror novels. If anything, it’s practically a requirement these days. After all, what better way is there to tell a reader that a new horror novel will give them something different from the old ones?

Of course, to do this properly, the comedy in a horror novel has to feel like a natural part of the story. This is easier to do than you might think. In short, if your story has vaguely interesting characters and/or a slightly strange premise, then this can be used for comedy as effectively as it can be used for horror.

A good modern example of this is probably Robert Brockway’s 2015 novel “The Unnoticeables“, where the fact that some of the main characters are 1970s punks means that there is plenty of room for irreverent, crude and/or gross humour that is a really good “fit” with the rest of the story.

Another good modern example is S. L. Grey’s excellent 2011 novel “The Mall“. Although this novel can best be described as what a mixture of “Saw” and “Silent Hill” would look like if it was set in a South African shopping centre and directed by David Lynch, some of the bizarre moments that make this story so unsettling are also used as a vehicle for some utterly brilliant social satire and/or weird humour. Because the humour emerges from things that, when seen another way, would be incredibly disturbing, it is a really good fit with the story.

So, although humour in a horror story needs to feel like it has emerged organically from the characters, story and/or settings, it is an essential ingredient in good horror fiction for the simple reason that it tells the reader that they can’t be entirely certain of what to expect if they keep reading. And, of course, unpredictability is one of the most important parts of effective horror.