Well, since I’m still reading the next novel (“Idoru” by William Gibson) and playing the next full-length game (“Dex”) that I plan to review, I thought that I’d take a very quick look at an absolutely awesome joke WAD (well, technically a “.pk3” file) for “Doom II”/”Final Doom” that was released on April Fools’ Day in 2016, but which I somehow only discovered recently. I am, of course talking about “Doom: The Golden Souls 2 Portable“.

This WAD is, as you may have guessed, from the creator of the excellent “Doom: The Golden Souls 2” – and, it is well worth playing that WAD before playing this one.

Like with some of my recent WAD reviews, I used the GZDoom 3.4.1 source port whilst playing this WAD since the original “Golden Souls 2” requires a relatively modern version of GZDoom and the forum post for this WAD suggests something similar. However, there is no accompanying text file for this WAD (since it is downloadable from Mediafire rather than the traditional /IDgames Archive download you’d expect).

Anyway, let’s take a look at “Doom: The Golden Souls 2 Portable”. Needless to say, this review will contain some joke SPOILERS.

Oh my god, the nostalgia 🙂

This is a single-level joke WAD that shows what “Doom: The Golden Souls 2” (a “Doom II” WAD inspired by the classic SNES game “Super Mario World“), would look like if it was ported to the original Game Boy. In keeping with this theme, the level’s music and menu are based on the classic “Super Mario Land 2” Game Boy game. And, if you ever played this game back in the day, then it is a nostalgia overload.

Once again, oh my god the nostalgia 🙂

During my childhood, I sometimes used to wonder what a FPS game would look like on the original Game Boy and when I found the closest thing to this that was available in the local second-hand shop (a submarine/battleship-themed game that used a side-scrolling first person perspective), I thought that it was really cool. Almost as cool as when I first saw that the Game Boy version of “Chessmaster” had a spoken intro.

What I’m trying to say is that, if you grew up in the 1990s, then this WAD is like a cool Game Boy cartridge that you heard rumours (actual traditional rumours, none of this modern internet nonsense) about, but could never find anywhere.

Seriously, if only this actually existed in 1996….

Anyway, the WAD itself is a Game Boy style version of the first level of “Golden Souls 2”. However, in addition to new graphics, sound effects and music, there are also a couple of interesting gameplay changes too. The most notable of these is that both the pistol and shotgun now fire projectiles (which make them better long-range weapons, albeit balanced out slightly by the spread of the shotgun’s projectiles) and thanks to the slight scarcity of ammo in this version of the level, the Doomguy’s fists are also slightly more powerful too.

Plus, like in “Doom II”, the shotgun only seems to fire both barrels at once. This is also a really cool nod to the limitations of the original Game Boy too.

Another cool thing about this WAD is the fact that the background music is similar to “Super Mario Land 2” (seriously, so much nostalgia!) and the monster sprites have also been redesigned in order to look like actual Game Boy sprites too. Seriously, this is so cool. 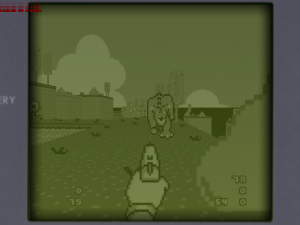 Seriously, it’s so cool to see low-res versions of all the familiar monsters 🙂

In terms of the actual gameplay, the level is a mildly challenging one that involves a decent amount of rather forgiving first-person platforming. If you’ve played “Golden Souls 2”, then it will be very familiar. However, in a really hilarious touch, the game actually “runs out of battery” just before you finish the level. If you ever played an original Game Boy back in the day, this will both make you roll your eyes and laugh at the same time.

I’m not going to spoil the rest of the ending, but this alone should bring back lots of nostalgia.

All in all, this WAD is a really fun, creative and funny piece of modern 1990s nostalgia. If you grew up in the 90s, then you’ll have a lot of fun with it. But, as well as being an awesome joke, it’s also a fascinating glimpse into what could have been if someone had somehow managed to make a FPS game for the Game Boy in the 1990s. Yes, it’s short and silly, but it is also one of the best joke WADs I’ve ever seen 🙂

If I had to give it a rating out of five, it would get four and a half.