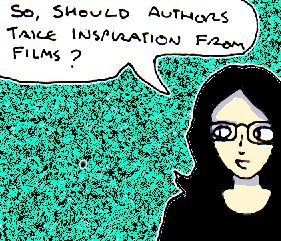 When I was reading the 1980s horror thriller novel that I reviewed yesterday, one of the things that surprised me was how cinematic it was at times. How I could very easily imagine various scenes from the novel being part of a low-budget “Video Nasty“, an enjoyably cheesy old TV show or something from one of George Romero’s classic zombie movies. So, naturally, this made me think about whether writers should take influence from films.

The short answer to this question is that it depends on your story. It works for some stories and doesn’t for others. A lot of this has to do with pacing, atmosphere and what you are trying to do with your story.

In short, if you want to write a fast-paced story that has a slightly stylised atmosphere and is written to entertain the reader, then taking inspiration from films is a good idea. After all, by virtue of the medium, the majority of films are relatively fast-paced. After all, they have between 90-180 minutes to tell a full, self-contained story. So, things like well-planned pacing and efficient visual storytelling (eg: the whole “show, don’t tell” thing) are at a premium. And, when used in novels like Shaun Hutson’s “Deathday” or Clive Cussler & Graham Brown’s “Zero Hour“, this can result in a truly gripping novel.

Likewise, if your story contains spectacular set-pieces or other such things, then taking inspiration from films can also be a good idea – especially since novels have a massive advantage in this area. In short, novels don’t have to worry about a special effects budget or the technology needed to create special effects. One person with a word processor (or even just a pen and paper) can create better “special effects” than a giant film studio with millions of pounds or dollars at their disposal. So, if your novel is going to contain a lot of spectacular moments, then it might be worth taking inspiration from films.

Plus, if you’re writing in the thriller genre, then film and television can offer all sorts of lessons about how to make your story more gripping and dramatic. Whether it is the clever use of mini-cliffhangers and/or multiple plot threads, how to create a gripping premise, how to use suspense, how to write snappy dialogue etc…. Or whether it is more cautionary lessons, like how making the main character too powerful/invulnerable can ruin suspense and lower the reader’s investment in the story (compare the first and fifth “Die Hard” films for an example of this), films can teach us a lot about the thriller genre.

In addition to all of this, because your reader will probably be imagining the events of your novel visually, taking inspiration from film can also help you to refine and think about the overall “look” of your novel too. When done well, this can result in a very atmospheric and memorable story.

On the other hand, there are good reasons not to take inspiration from film when writing a novel. First of all, there are things that novels can do that films can’t really do, and you can use these to give your reader a much deeper and richer experience than they will find in a film.

For example, novels can directly show a character’s thoughts, novels can easily use non-visual storytelling (and, yes, sometimes it is better to tell than show the reader something), novels can use a distinctive narrative voice, novels can use detailed descriptions and an author also has much more control over the flow of time (eg: the events of a minute can take either a single sentence or several pages) than film-makers do.

All of these things give novels a level of vividness, immersion and depth that films can only dream of. At the same time, doing all of this stuff will probably slow down the pace of your novel a bit. But, for stories where the emphasis is on the characters, atmosphere, fictional world, the writing itself etc… then it can really work wonders. So, if you are telling one of these stories, then taking inspiration from films probably isn’t a good idea – because films can’t do this stuff as well as books can.

Plus, thanks to things like the economics of film (a film costs a lot to make, so it has to appeal to a mass audience), film censorship (eg: the current trend for “PG-13″/”12A” rated films) and the dominance of Hollywood, there are either formal or informal limits on the types of stories that films can tell. On the other hand, writers have far fewer of these restrictions and can tell the kind of imaginative, quirky, subversive, unusual, complex, transgressive and/or personality-filled stories that would never make it to the screen.

In short, there isn’t really a clear answer to whether writers should be influenced by films or not. It depends on the type of story you are trying to tell, not to mention that it also isn’t a binary yes/no thing either. In other words, it’s possible (in fact, it’s normal) to be partially inspired by films whilst also being inspired by other stuff too. After all, pretty much everyone has watched at least a few films and has seen at least a couple that they liked enough for them to be an influence. So, it is more of a matter of degree and extent than a “yes or no” thing.

Still, depending on the type of story you are telling and what you want your story to do, you should think carefully about the extent you want it to be inspired by films.

2 comments on “Should Writers Take Influence From Films?”