Well, since I’m still reading the next novel I plan to review (“A Canticle For Liebowitz” by Walter M. Miller Jr ), because it has been nearly a month since my last “Doom II” WAD review and because there hasn’t really been much gaming-related stuff on here recently (I’d planned to finish and review either “Braid” and/or “Cosmo’s Cosmic Adventure”, but got distracted by playing “Devil Daggers” again) – I thought it was time to review a “Doom II” WAD.

And, after clicking the “random file” button on the /idgames Archive a few times, I eventually found an interesting-looking WAD from 2006 called “Twisted Metal 1024“.

As usual, I used the GZDoom source port whilst playing this WAD – although I guess that it will probably work on pretty much any source port. It might even possibly work on the original DOS/Windows 95-8 versions of “Doom II” or “Final Doom”, but I haven’t tested this. 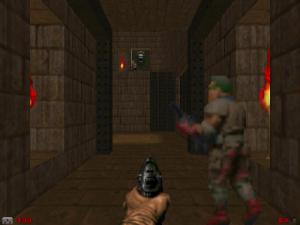 From everything I’ve read about it, it was created for a map-making contest where every map had to be no more than 1024 x 1024 (not sure of the exact units) in size. In other words, it is a fairly small level. 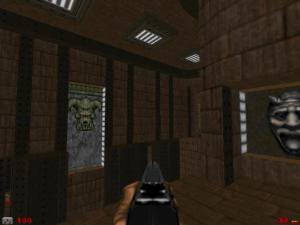 Not that you’ll really notice this all the time.

The main reason for limitations like this is to force level designers to be creative – and this WAD absolutely excels here 🙂 Seriously, if you want an example of well-planned, compact level design that makes the absolute most of the space available, then play this level.

It is filled with carefully-placed passages and walkways that intersect or even – sort of- pass above each other (thanks to the running jump feature of the original “Doom” engine), which not only make the level feel significantly larger than it actually is, but also allow for some really good level progression too.

This is also helped by some well-placed enemy spawns in previously-visited areas.

Progress through the level is achieved by pressing switches to open doors and/or finding skull keys. Although this adds a certain amount of linearity to the level, the fact that you often have to backtrack to find doors lends the level a feeling of non-linearity, whilst the compact size of the level also means that you don’t have to worry about getting lost or stuck in the way that you might do in larger levels 🙂

There are also a few other cool level design tricks that add length to the level whilst keeping the map size down, such as a fast-paced and claustrophobic corridor segment involving switches, walls and monster closets. Seriously, I cannot praise the design of this level highly enough 🙂

In terms of difficulty, this is a mildly-moderately challenging level that mostly features low-level enemies and a couple of mid-level enemies. Whilst this might not sound like much of a challenge, the claustrophobic rooms and corridors mean there is relatively little cover when encountering monsters, and the careful placement of several chaingun zombies can whittle your health down fairly quickly if you aren’t careful (and there are just enough health power-ups, but don’t expect loads of them here. Likewise, there’s no super-shotgun to make things easier). This results in a fun, and sometimes frantic, level that is more reminiscent of classic 1990s “Doom II” levels than more modern WADs. 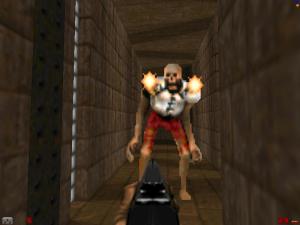 And, yes, this was a bit of a surprise 🙂

As for the new music, it is the kind of fast-paced classic-style music that you’d expect to hear in a level like this. It really helps to add a bit of retro atmosphere to the level, although it probably isn’t quite as memorable as some of the music from the original games.

All in all, this is a really fun little level 🙂 If you want a short, classic-style level that also contains some excellent level design and planning, then this one is well worth checking out 🙂

If I had to give it a rating out of five, it would get four and a half.