Well, since I’m reading a horror/comedy novel set in the early 1990s (“Meddling Kids” by Edgar Cantero) and because I was also experimenting with a writing project set in the 1980s, I thought that I’d talk about a few of the benefits of setting your story in the 1980s-90s.

1) Phones and the internet: This is a fairly obvious one, but it is worth mentioning nonetheless. Although basic mobile phones were starting to become more common during the mid-late 1990s, one of the defining features of these two decades is the fact that the world didn’t revolve around mobile phones, social media etc… This has all sorts of benefits when it comes to storytelling.

Plus, although the web was a thing during the 1990s, it was a lot less common and/or developed (it was also a lot slower too, and made this noise when you connected to it). As such, there wasn’t really the kind of mainstream online/social media culture that there is these days.

I could go on for quite a while, but the lack of things like social media, smartphones etc… means that stories set in the 1980s/90s can often have a lot more suspense, personality, nuance etc… than stories set in the modern world.

2) It isn’t that difficult to write: Although you’ll probably have the annoying experience of thinking of an awesome 80s/90s pop culture reference to add to your historical story, only to look online and realise that it refers to something that existed a year or two after when the story takes place, it is easier to write historical stories set in these decades than in other decades.

There are several reasons for this. Firstly, even if you don’t actually have any memories of the year that your story is set in, there’s a very good chance that you’ve encountered a lot of things from this time period without even realising it. After all, if you grew up in the 1990s or the 2000s, then films/books/TV shows/music etc… from the 1980s/90s were still fairly recent back then. So, you probably already know more about these decades than you think.

Secondly, these decades are recent enough to still be vaguely similar to our current world. So, if you write a fairly “timeless” story with a few subtle nostalgic details and a little bit of historical awareness (eg: about things like mobile phones, historical events etc..), then it will probably seem reasonably convincing. After all, most novels that are actually from the 1980s and 1990s usually keep their “80s/90s” elements relatively understated, since these things were just ordinary life back then.

Thirdly, there’s no shortage of research material out there. Nostalgia about these decades is fairly popular at the moment, so there’s loads of information about them on the internet. Likewise, things like films from these decades can usually be found fairly easily on DVD too.

3) Comments: Simply put, one of the best ways to comment about the benefits and flaws of the modern world is to tell a story set in the past. Since your readers will be reading it in the present day (and know that you were writing it in the present day), then they are going to compare the historical “world” of your story to the world around them.

Well, today’s animation was kind of interesting. Originally, it was a digitally-edited painting – which was something of an experimental painting (where I tried out a couple of new techniques [like adding ink after adding paint]), that didn’t turn out too well. So, I decided to turn it into an animation.

Originally, this animation was also going to contain rain too, but this didn’t look too good – so I left it out.

As usual, all three of the paintings and/or animations in this post are released under a Creative Commons BY-NC-ND licence.

Well, after finishing my “Damania Resolute” webcomic mini series, I was in the mood for making some stylised retro-style art. Surprisingly, this digitally-edited painting ended up being a (non sci-fi) 1980s-themed one rather than a 1990s-themed one though.

Although the composition and the lighting weren’t quite as interesting as I’d hoped, I still quite like how this picture turned out.

This might just be me, but the sci-fi genre just looked a lot cooler in the 1980s and 1990s than in any other period of history.

This was the the time of “Blade Runner“, of “Cowboy Bebop“, of “The Matrix“, of Iron Maiden’s “Somewhere In Time” album, of “Akira“, of Warren Ellis’ “Transmetropolitan” comics, of William Gibson’s “Neuromancer” and a hundred other cool things that presented a very distinctive cyberpunk vision of the future.

Anyway, the day before I wrote this article, I made two 80s/90s-style cyberpunk paintings that were originally posted here in December. In case you haven’t seen them, this is what they look like:

“These Awesome Relics” By C. A. Brown

“Roboforensics” By C. A. Brown

But, how do you come up with ideas for this kind of art? Here are a few tips:

1) Set it at night: This goes without saying, but one of the easiest ways to make your 80s/90s-style cyberpunk picture look a lot more atmospheric is simply to set it at night. This is mainly because a major part of this aesthetic comes from the contrast between brighter and darker areas (eg: the glow of a hundred neon lights on a rainy street at midnight, the glow of a computer screen in a dark room etc…).

If you want to see a great cinematic example of this technique, then just check out the movie “Blade Runner” – the entire film is set at night and it looks both futuristic and stunningly beautiful as a result.

Yes, you’ll probably need ot have had some practice at painting or drawing realistic lighting in order to be able to do this well. But, you’d be surprised at how much more atmosphere you can add to your cyberpunk art if you set it at night.

2) Technology: One of the great things about 1980s sci-fi is that almost all of the technology in it often looked a lot chunkier than we would expect futuristic technology to look like these days.

So, if you want to give your cyberpunk painting or drawing an 80s kind of look, one way to do it is to make all of the technology in your artwork look like either slightly bulkier versions of modern technology or heavily-upgraded versions of technology from the 80s.

If you want to give your cyberpunk painting a 90s look, then make the technology either slightly smaller (eg: “Matrix”-style flip phones, modern-style VR headsets etc..), but include to include futuristic versions of things which are slowly becoming obsolete these days.

After all, even back in the 1990s, no-one could have imagined that things like purpose-built digital cameras, wristwatches, print newspapers, portable CD/ tape/ MP3 players, desktop computers etc… would be less popular in the future because their purpose can be fulfilled with other items of technology (eg: *ugh* smartphones).

The trick with technology in 80s/90s style cyberpunk paintings is to show slightly bulkier versions of technology that would have seemed futuristic at the time, but which is either in common use now or will probably come into common use within the next decade or two.

3) Detail: One of the defining features of 1980s/90s cyberpunk is sheer sensory overload. In cyberpunk novels, this is done through using a lot of futuristic-sounding descriptions (which are never always fully explained). But, in things like art, comics and film, it’s often done through including a surprising number of background details.

One easy way to make your painting or drawing look cyberpunk is, if you are setting your picture in a public space, to include a lot of advertising in the background. You can make this advertising look undetailed (if you’re in a hurry) or you can have a lot of fun creating satirical adverts, but you need to cram the background with more advertising than usual. Just make sure to advertise things that don’t actually exist (because, honestly, there’s already enough genuine advertising in the world as it is).

If you want a good example of this kind of artwork, then just read some of Warren Ellis’ “Transmetropolitan” comics.

4) Fashions: When it comes to thinking of clothing designs for 80s/90s-style cyberpunk artwork, you can have a lot of fun here since there are many different approaches you can take to the fashion design in your picture.

Well, although I’d planned to make some more 1990s fan art for today, I couldn’t quite think of what to draw. So, in the end, I ended up making this random digitally-edited painting which looked more like something from the 1980s than the 1990s. 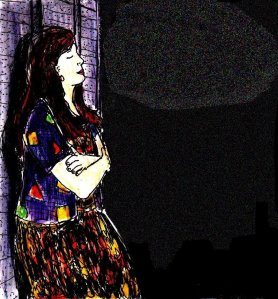 Well, I was still in the mood for making 1980s style art and I ended up making this digitally-editing painting. Although it was kind of random, I quite like how it turned out 🙂

“Virtual Holiday” By C. A. Brown

Well, I’d actually made a different painting for today – but it really didn’t turn out very well, so I decided to make another one and this painting is the result.

Although I was aiming to make yet another 1980s sci-fi movie poster style painting, this one ended up looking more like the cover of an old sci-fi novel. Still, I’m quite proud of how it turned out (even if it required more digital editing than usual after I scanned it).

“City Boulevard” By C. A. Brown

Well, I’m still in the mood for 1980s sci-fi movie poster style art and, although today’s painting also required a fair amount of digital editing – I’m quite proud of how it turned out. Plus, it gave me an opportunity to practice drawing people running too.

Well, I was still in the mood for 1980s sci-fi movie poster style art and, although this painting required more digital editing than I expected (and also possibly looked more 1970s than 1980s), I’m really proud of how it turned out 🙂