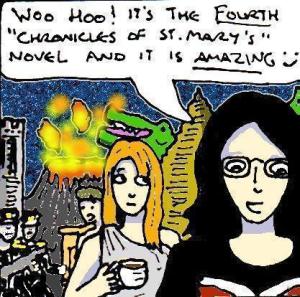 Well, after reading the first three novels in Jodi Taylor’s amazing “The Chronicles Of St. Mary’s” series (you can see my reviews of them here, here and here), I reluctantly stopped reading the series for a while since second-hand copies of them were getting progressively more expensive the further I went through the series.

But, when I noticed that the fourth and fifth books weren’t quite as expensive as I’d thought, I decided to splash out on them. And, although I’ll probably save the fifth book for a later date, I thought that I’d take a look at Taylor’s 2014 novel “A Trail Through Time” today 🙂

Although this is the fourth novel in a series, it contains quite a few recaps. So, it can theoretically be read as a stand-alone novel. However, the story will have much more comedic, dramatic and emotional impact if you’ve read the other three books first.

So, let’s take a look at “A Trail Through Time”. Needless to say, this review will contain a metric ton of SPOILERS (including for the previous three novels).

This is the 2017 Accent Press (UK) paperback edition of “A Trail Through Time” that I read.

The novel begins with a recap of the ending of the previous novel. Time-travelling historian Madeleine “Max” Maxwell has just found herself in a parallel universe with a version of her lover, Leon. In Max’s universe, Leon died. In Leon’s universe, Max died. Needless to say, both are pretty amazed to see each other again.

However, before Max and Leon can spend too long in each other’s company, they get a phone call warning them that someone is coming. Less than a minute later, mysterious armed men begin to attack Leon’s house.

Luckily, this version of Leon has a time travel pod hidden in the garden. So, they jump back in time to a deserted tropical island. Leon explains that the armed men are the time police! The name pretty much says it all really. They’re after Max. And it isn’t long before they show up on the island.

After dodging them again, Max and Leon jump back to 17th century London. There is a frost fair on the river Thames, and it is bloody freezing! Needless to say, it isn’t long before the time police show up again. But, how long can our favourite fugitives keep ahead of them?….

One of the first things that I will say about this book is that it’s even more compelling than I expected. I binge-read most of it in a single day 🙂 Everything great about the first three novels in the series has been focused, refined and reinvented and it is brilliant. It is epic. Seriously, I cannot praise this novel highly enough! It’s like “Doctor Who” meets “Sliders” meets “Bluestone 42” meets “Stargate SG-1” meets… well… something even more awesome.

Not only is the early part of the novel like a brilliantly comedic version of “Doctor Who” (seriously, it reminded me a bit of this episode), but the time police are an absolutely brilliant addition to the story too. They’re exactly the right combination of chillingly menacing and hilariously silly (I mean, time police!). Likewise, turning Max and Leon into fugitives is a brilliant way to keep the story focused whilst also adding lots of thrilling suspense, chase scenes and character-based drama. Genius!

Likewise, the slightly slower middle parts of the story add more atmosphere, characterisation and depth (including hinting at a lot of dramatic “off screen” politics, conflicts etc..) whilst also building up to a spectacularly dramatic, powerful and thrilling final act 🙂 And, yes, the later parts of the story are absolutely epic. Imagine the series finale of a great TV show and you might come close. Although the final battle is relatively small in scale, this only makes it more powerful and dramatic.

The parallel universe premise of the novel is utterly amazing too 🙂 Not only does this allow the story to return to it’s roots, but it also allows for lots of other interesting changes and subtle differences that really help to keep the reader on their toes. It also adds a lot of drama and suspense to the novel too, since Max finds herself abandoned in another, strange world with a very slightly different history.

Plus, as you’d expect from a “St.Mary’s” novel, there are also quite a few interesting time travel scenes too. Although these aren’t the main focus of the story, there are a reasonable number of them and they include random and eccentric things such as a visit to ancient Egypt to see Pharaoh Akhenatan, the eruption in Pompeii, a frost fair on the River Thames, a character catching bubonic plague in the middle ages etc…

As for the novel’s characters, they’re as eccentric and well-written as ever. In addition to the parallel universe storyline allowing for the return of a familiar villain (Barclay) and for some interesting character changes, the novel’s early focus on Max and Leon fleeing the time police also allows for a lot of characterisation too. Likewise, as mentioned earlier, the time police are brilliant antagonists too – being just the right mixture of menacing and hilariously silly.

In terms of the writing, it’s also as good as ever too. If you’ve read previous novels in the series, you’ll know that Max’s first-person narration is a wonderfully unique combination of irreverent humour, serious storytelling and more “matter of fact” narration. It might not be to everyone’s tastes, but I find the narration in this series to be an absolute joy to read 🙂

In terms of the length and pacing, it’s reasonably good. Although the novel is 379 pages long, it never really feels too long. Likewise, not only is this novel more of a fast-paced thriller, but even the novel’s slower-paced scenes still feel gripping thanks to the dramatic backstory. Likewise, this novel has a really good structure and story arc too. There’s also a really good balance between faster and slower segments of the novel, and the story feels a lot more confident and focused than some earlier novels in the series did.

All in all, this is an absolutely awesome sci-fi/comedy/thriller/drama novel 🙂 Everything that makes this series so brilliant has been refined, focused and reinvented excellently in this novel. If you want a novel that is a bit like a more eccentric, comedic, irreverent and grown-up version of “Doctor Who” – complete with a really epic story arc – then you can’t go wrong with “A Trail Through Time”.

If I had to give it a rating out of five, it would get at least a five 🙂