Well, this (heavily) digitally-edited painting was a bit rushed. Originally, I’d planned to make a “realistic” still life painting of an audio cassette, but since I was running late with everything, the only way I could salvage the painting was to use bolder and slightly more surreal colours and to use a less realistic background. Still, it gave the final painting a cool 1980s/90s-style look though 🙂 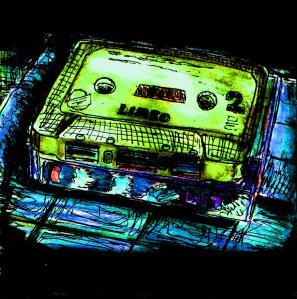 “Audio Cassette” By C. A. Brown

Well, I’m still in a slightly retro mood, so I thought that for today’s instalment of my “How To Draw” series, I’d show you how to draw an audio cassette.

Although this guide didn’t turn out quite as well as I hoped it would, it will still hopefully give you a general impression of how to draw an audio cassette.