A while after my review of the “Mercenaries” mod for “Doom II” was posted here, the creator of this mod contacted me and asked if I wanted to check out a public demo of his latest “Resident Evil”-themed fan project called “Resident Evil Code Name Hunk [1.1 Demo]“. Being a fan of the zombie genre, “Doom” and the old “Resident Evil” games, I just had to check it out.

Although I usually tend to write articles, reviews and mini reviews quite far in advance of when I post them, I thought it best to post this (fairly long) mini review today whilst the demo is still current. I’ll probably reschedule the review I’d originally planned for today for sometime later in the year.
——
Interestingly, the download of this demo actually comes with a copy of the source port (“GZDoom 1.9”) that you will need to run it. However, it isn’t a stand-alone game – so, you’ll still need to have “Doom II” or “Final Doom” if you want to play it.

Since this is a zombie-themed game, I should probably warn you that this review may contain some (unrealistic) GRUESOME IMAGES, but I’ll try to keep them to a minimum.

Likewise, I should probably also mention that the demo itself contains red/white FLICKERING LIGHTS/ STROBING EFFECTS and may not be suitable for players with photosensitive epilepsy and/or certain types of migraine (I’m not an expert on these subjects, so I don’t know if the part in question is intense enough to pose a problem or not).
———
So, without any further ado, let’s take a look at “Resident Evil: Code Name Hunk [1.1 Demo]”:

Since this is a demo of a much larger mod, “Code Name Hunk 1.1” only contains one level. Even so, there’s a surprising amount of content here – and the demo took me about an hour (or possibly slightly more) to complete.

The demo begins with a long FMV cutscene from one of the “Resident Evil” games. Yes, you heard me correctly, FMV – in “Doom”!

The story begins in 1998 when a group of commandos from the Umbrella Corporation have been sent to Racoon City to retrieve a sample of the G-Virus from William Birkin. This doesn’t go quite as planned and Birkin is shot, but – in the ensuing chaos – he is also also exposed to the virus and begins to mutate. 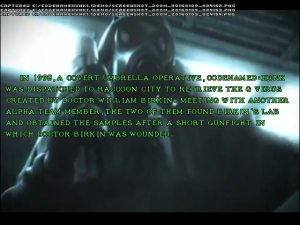 It’s actual full motion video… in “Doom”. What sorcery is this?!

The intro then switches to an in-game cutscene showing Hunk (the main character) being killed by the monster that William Birkin has mutated into. This happens on the orders of the Red Queen (presumably the same one that appears in the first “Resident Evil” movie).

The game then shows the events of nine hours earlier, when Hunk and his team have been sent into Racoon City to retrieve the virus sample….

In addition to some fairly impressive introductory cutscenes, the demo also contains quite a few in-game cutscenes too. Although they’re really cool and they also help to add some character to the game, one slight problem is that most of these cutscenes seem to be unskippable.

So, it’s sometimes a good idea to save directly after the cutscene finishes – especially if it’s a cutscene that introduces a new type of monster!

Like this one. It’ll make you feel nostalgic about “Resident Evil 2” when you see it for the first time, but if you don’t save quickly or fight the “licker” monster well enough, then you’ll probably end up seeing it multiple times.

In terms of the gameplay in this demo, I’ve got a lot – both good and bad- to say about it. Still, it’s a “work in progress” version of the game, so some of the problems I mention may not be an issue in later versions.

In other words, you’ll also need to explore carefully, actually read any documents you find and solve several puzzles. This adds some variety to the gameplay and also helps to give the demo more of a classic “Resident Evil” kind of feel.

If you’ve played the classic “Resident Evil” games, then you’ll have no trouble solving the puzzles here. They’re complex enough to require a bit of thought, but they’re simple enough to be enjoyable rather than frustrating.

Most of them are simple item/key-based puzzles, although the game also contains a couple of slightly more complex and inventive puzzles where you have to find and use certain codes.

One of the puzzles involves a film projector and it’s really inventive. Although, again, I should probably warn you that it contains flickering/strobing effects. 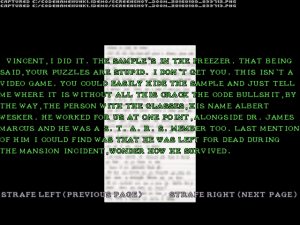 Amusingly, one of the characters even makes a sarcastic comment about “Resident Evil” puzzles LOL!

Interestingly, the most challenging part of these puzzles was finding exactly where I was supposed to enter the first code.

Another cool thing about the gameplay is that many of the classic monsters from “Resident Evil” 1-3 show up in the demo. There are zombies from “Resident Evil 2”, hunters, lickers, zombie dogs and the Nemesis. All of these monsters look and behave exactly as you would expect them to.

Although, I have to ask, why aren’t there any zombie cats in the “Resident Evil” universe?

It’s great to see THESE zombies again too. Seriously, it’s been way too long!

However, even on “medium” difficulty, the difficulty curve in the demo can be slightly steep to say the least. Although you begin the level by fighting a few zombies, it isn’t long until you suddenly find yourself fighting against two hunters in a narrow street (with very little room to dodge or run).

Although I imagine that this part of the game would have been easier if I’d conserved my ammo slightly more carefully beforehand, it was still slightly too difficult for an early part of the level in my opinion. Another thing that makes this one part of the level significantly more challenging is that, unlike in the classic games, you don’t have the option to retreat to another room if you’re low on ammo. 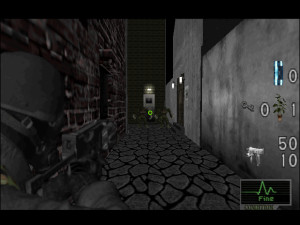 This is probably one the most difficult parts of the demo, and it’s surprisingly close to the beginning. I only got through it by chance and a lot of trial-and-error.

Even the Nemesis battle is surprisingly easy, when compared to fighting those two hunters!

Another slight problem with the demo is the controls. Unlike many games, this is one where you should probably actually read the manual before you start playing.

Although you’ll probably get used to the controls after a while, some of them aren’t very intuitive (for example, in order to run – you need to press “forward” and “reload”). Not only that, you’ll also have to manually alter some of the controls before you begin playing (eg: you’ll have to enable “always mouselook”, otherwise you won’t be able to aim your weapons properly etc…).

Like in the classic “Resident Evil” games, the demo takes a slightly more realistic approach to combat. In other words, Hunk has to draw and aim his guns before he can reload or fire them. He also can’t change weapons whilst he’s aiming (and there’s also a slight delay when switching weapons). Although this is fairly faithful to the source material, it can get in the way of the gameplay slightly during some of the more frantic battles. 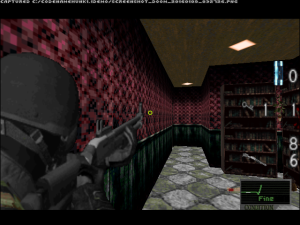 Despite the modern-style camera angles, this game is based on “Resident Evil 1-3”. So, running and shooting at the same time is impossible.

However, when you are close to a monster, instructions will flash up on the screen and you will be give the option of either dodging or performing a melee attack. Interestingly, there are now two possible ways to dodge a monster (compared to just one in the “Mercenaries” mod).

Although this is a really cool addition, it was somewhat confusing at first due to the generic on-screen descriptions (unlike the clear “Press A + D” instructions in the “Mercenaries” mod).

Ok, I have two seconds to dodge. Do I follow the manual or the instructions on screen? Or … Ouch!

As for the weapons in “Codename Hunk 1.1”, they’re fairly similar to the weapons in “Mercenaries”. Hunk can use a pistol, a shotgun and a submachinegun. Throughout the game, you’ll also find flash grenades that can be used to briefly stun any nearby monsters.

This is a really cool addition, although the grenades only stun larger monsters for 1-2 seconds, which doesn’t always give you enough time to switch to another weapon (if you’re out of SMG ammo).

Graphically, “Code Name Hunk 1.1” is absolutely superb! The sprites are absolutely perfect and the animation is really smooth too.

In addition to this, there’s a surprising variety of locations in the demo level – including a cinema, a church, a creepy basement, an industrial freezer, a city street and a restaurant. All of these locations look like something that you might have seen in the original “Resident Evil” games. 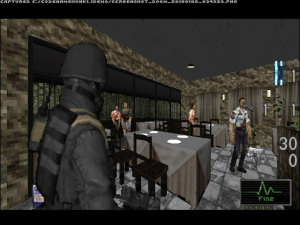 This is one of the coolest locations in the demo. Seriously, it’s just like something you’d expect to see in the first two “Resident Evil” games. 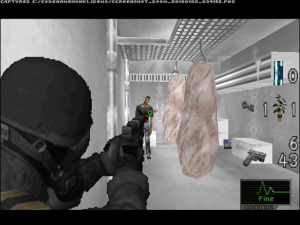 This part of the level is wonderfully chilling, if you’ll pardon the pun.

The level design is also fairly good too. Like in the classic games, the level is fairly non-linear and the locations all look fairly realistic. Although this level will require you to explore carefully, it’s relatively small size means that you won’t get lost for too long. In addition to this, the end of the demo also gives you an intriguing hint as to what the second level will be….

Musically, this demo also makes use of several pieces of classic “Resident Evil” music, as well as some more modern music. My favourite thing about the music is that the police station music from “Resident Evil 2” (my favourite piece of Resident Evil music) starts playing when Hunk enters the church about halfway through the level.

The voice acting in this demo is also fairly good too, considering that it’s a fan made game. Not only that, Hunk also gets to say several wonderfully badass lines of dialogue too. 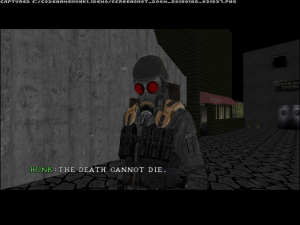 “That is not dead which can eternal lie, And with strange aeons even death may die….” – H. P. Lovecraft

All in all, this looks like a really interesting beginning to a really cool project. Like with the “Mercenaries” mod, I’m still astonished that anyone has been able to re-create the “Resident Evil” games so accurately and faithfully with nothing more than a source port for the “Doom” engine.

Yes, “Code Name Hunk 1.1” has a few small flaws (eg: the control scheme, the short stun times and the difficulty spikes in some areas), but it’s worth checking out if you’re a “Resident Evil” fan.

If I had to give what I’ve seen of “Code Name Hunk” so far a rating out of five, it would get a four.