Sorry about even more recycled title art, but I was fairly tired at the time of writing this article.

Although I finished preparing this year’s Halloween comic the night before I wrote this article, the last few pages were considerably less enjoyable to make than the rest of the comic was. But, despite feeling my enthusiasm for the project waning, I was still able to finish it.

In fact, since I got back into making comics in 2015, I’ve never really left a comic unfinished (eg: even though this mini series has a slightly open ending, it still has some resolution to the story in the final two pages). But, back in 2012-13, I still used to leave comics unfinished occasionally.

So, what did I do to stop myself from leaving comics unfinished? Here are a few very brief tips.

1) Plan first: One of the easiest ways to avoid unfinished comics is to plan out your comic before you make it. Just make a mock-up of your comic with extremely rough scribbled artwork.

If you lose interest or get severe writer’s block whilst making your plan, then either change it, take a break or try planning a different comic. This alone will help you to avoid comic ideas that are doomed to failure.

If you’re worried that planning will take some of the spontaneity out of making comics, then just remember that comic plans aren’t set in stone. If you think of a better panel arrangement, something else to add etc.. when you’re actually making the comic, then by all means do it. Just think of your plan as a backup that can come in handy if you get writer’s block.

2) Length: A shorter finished comic is better than a longer unfinished comic. So, when you’re planning your comic, try to be at least slightly conservative when working out how long it is going to be (not doing this to the right extent was one of the problems with my Halloween comic).

So, plan a short comic and – if it goes well – maybe make it longer.

3) Segmentation: This obviously won’t work for all comic projects. But, if you can make things that consist of lots of self-contained segments (such as stand-alone “newspaper comic”-style comics, short stories etc..) then the risk of leaving the project unfinished is a lot lower because, if you find that you are running out of enthusiasm or ideas, then you can just finish your current segment and leave it there.

Since each segment is self-contained, then there will be some kind of conclusion to your project even if you abandon it before making as many segments as you’d originally planned to make.

So, if you need to end your comic, then end it. Even if you rush the ending, then it’s still better than leaving your comic unfinished.

Sorry for the short and abrupt article, but I hope it was useful 🙂 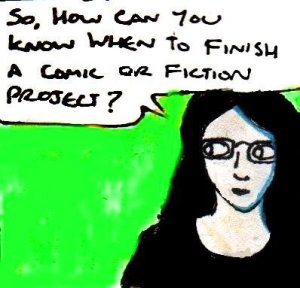 Learning when to finish a collection of stories or webcomic updates is a skill which can take a bit of practice. Ideally, you want to finish whilst you still have at least a tiny bit of enthusiasm left for the comic or fiction project.

Whilst I now seem to have something of an instinct about when to finish when it comes to my various webcomic mini series (which typically hover around 8-12 updates per mini series these days), I was woefully inexperienced about it when it comes to writing short stories – as evidenced by the low quality of the final story in the group of short stories I wrote for last Halloween during a return to a storytelling medium I’d abandoned quite a bit in recent years.

So, these tips will mostly be based on what I’ve learnt from making webcomics and from the mistakes I made with my short fiction series last Halloween.

1) Always plan: One mistake I made with my Halloween short stories was doing virtually no proper planning before I started writing them. I’d mostly just think of the opening sentence and possibly the premise a while before I started the story, and that was it. I had the idea that I wanted to write ten stories, but that was about it.

Whilst this allowed me to come up with some neat ideas and endings that really surprised me (like in this story or this story), it was just as likely to mean that my stories turned into a confusing mess (like this one).

If you plan your stories and/or comics out before you make them, then you’ll get a general sense of their size and scope. You’ll be able to tell if your project is long enough for you to finish it before you run out of enthusiasm (always plan your projects to be shorter, but with room for expansion if they go well).

You also won’t have to worry so much about writer’s block in the middle of the project, since you’ll already know what you’re supposed to make. This also helps to prevent the wild variations in quality that can happen in unplanned projects.

2) Know your limits: You’ll have to learn this through bitter experience (eg: failed and/or unfinished projects), but many people have a limit to either how long they can focus on a single project or how many projects they can keep going at any one time.

This is why, for example, all of my webcomic mini series are less than 20 comics long. When I’m making a mini series, I’ll usually go all out and make something like 2-3 comics per day (even if I only post one per day). However, I also know that I usually can’t keep this up for more than a few days (usually less than a week). So, I plan the length of my mini series to take account of this fact.

If you know your limits, you can work within them and you’ll be more likely to actually finish the projects that you start. Likewise, you’ll also be able to alter any project ideas you have so that you can stay within your limits, rather than risk running out of enthusiasm halfway through the project.

3) Always leave wanting more: If you find that you miss one of your creative projects after you’ve finished it, then this is usually a good sign. It means that you’ll want to make something else like it in the future.

If, weeks later, you find yourself wishing you could have added a few extra comic updates or stories to your project, then this is also a good sign.

However, exhaustedly slumping over the finish line like you’ve just run a marathon is probably not going to make you want to make more comics or write more fiction for a while at least.

So, make your projects – especially the ones you’re really excited about – a little bit on the shorter side, and you’ll find that you have enthusiasm and energy left over for future projects.

For example, my Halloween fiction series should probably have only been four stories long instead of ten stories long. I was truly, properly, enthusiastic and inspired for about 5-7 of the ten stories, but the other 3-5 were mostly there because I was determined to write ten stories. If I’d just written four stories (but not necessarily the first four in the collection), then I’d have finished whilst I was still in an enthusiastic and inspired mood.