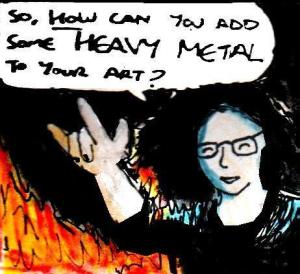 Although heavy metal is perhaps the most awesome type of music in the world, it’s always been a genre that I’ve found difficult to use for direct artistic inspiration. Although I might be listening to it when making a lot of my art, relatively little of my art has actually been recognisable as “heavy metal art”.

Likewise, although some of the visual techniques I use all of the time (eg: tenebrism etc..) were probably inspired by heavy metal album covers, I still found it difficult to make art that was explicitly “heavy metal art”.

But, when I was feeling uninspired the day before writing this article, I eventually decided to try to make some heavy metal art. In the process of working out how to do this, I learnt a bit about how to make art in this genre. But, here’s a preview of part of the painting that I made (which will be posted here in early-mid March): 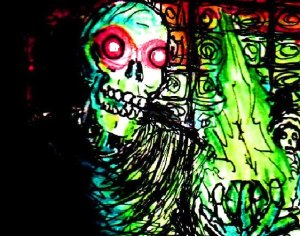 This is a preview of a painting that will appear here in early-mid March.

So, here are some basic tips for making heavy metal art if you haven’t really made any before, but already have some art experience/practice:

1) Music: This almost goes without saying, but there is only one genre of music that should be playing in the background when you are making heavy metal art. I probably don’t need to expand on this point much.

Once you’ve done this, try to look for common visual themes in all of the heavy metal art that you’ve seen. For example, during my research, I found that the common visual elements were tenebrism, skeletons (glowing eyes are cool, but optional), swords, semi-nude/nude women, semi-nude muscular men, grotesque monsters, gory violence, creepy old buildings etc…

When you’ve found all of the common visual themes, choose the ones that interest you (for the painting earlier in the e-mail, the elements were tenebrism, skeletons and old buildings) and try to find a way to incorporate these generic elements into a new and original painting.

3) Action: If there’s one thing that can be said about heavy metal art, it’s that it includes a lot of action. Something is always happening in a heavy metal painting. So, when doing your research into heavy metal artwork – look at the kinds of things that are happening in each piece of art.

Once you’ve looked at enough examples, try to think of a dramatic scene that looks like something from a horror movie and then use this new imagined scene as a basis for your painting.

Likewise, if you see a common/ frequently-used pose that you like, then find a slightly new variation on it and use it in your artwork. Although I’m not a copyright expert, my brief online research on the subject seems to suggest that poses, in and of themselves, probably cannot be copyrighted (under the same principle that ideas, but not specific expressions of those ideas, cannot be copyrighted).

Still, both to err on the side of caution and to make your art slightly more distictive, it’s best to come up with a very slight variation on any poses that interest you.

For example, the “outstretched hand” pose used in my painting was probably made famous by Iron Maiden, but variations have also been used in art for bands like Children Of Bodom. My own variation features a slightly tilted head, a very slight forward lean, an outstretched left arm and a few other small changes that help to differentiate it from either of these things (as well as the fact that the actual content of the art is totally different to either example).

So, make sure that you have other sources of inspiration too. For example, my painting was at least partly inspired by the wonderfully grotesque artwork in old American horror comics from the 1940s/50s. Likewise, the lighting in the painting was inspired by both classic computer games. I could probably go on for a while, but this painting has more inspirations than just other pieces of heavy metal art.

If you have some non-metal influences, then your art will look significantly more original and interesting.