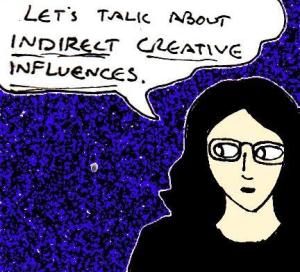 Even though this is an article about making art, making comics and/or writing fiction, I’m going to have to start by talking briefly about music and about a celebrity death that happened earlier this year. As usual, there’s a good reason for this that I hope becomes obvious later.

As regular readers of this site know, I write these articles ridiculously far in advance. As such, the morning before I wrote the first draft of this article, I read the news that Chuck Berry had died. Although I’d only heard a few of his songs before, I suddenly realised that all of the heavy metal and punk songs on the playlist that I was listening to at the time probably wouldn’t exist if it wasn’t for Chuck Berry either inventing or popularising rock and roll during the 1950s.

This, of course, made me think about the whole subject of indirect influence. Since I’m guessing that many of the metal and punk bands I was listening to probably weren’t directly inspired by Chuck Berry (eg: many of the bands I was listening to were formed during the 1980s and 1990s, when 1950s rock and roll was probably seen as laughably old fashioned). Yet, the bands that inspired those bands were probably either inspired by Chuck Berry or inspired by another musician who was.

So, this made me think about indirect influences and how fascinating they are.

If you create anything, then there’s a good chance that you probably have a few indirect influences that you don’t even know about. After all, something or someone probably inspired you to become an artist and/or a writer. Likewise, the types of stories you like to tell, the types of paintings you make etc.. were probably inspired by an interesting mixture of cool things that you’ve encountered throughout your life.

Every creative person has influences. And this is just as true for the creative works that influenced you. So, there could be a huge number of indirect influences that you might not even know about. But, why should you be interested in this subject?

The first reason is for pure enjoyment. Not only might looking at what influenced the people who influenced you help you to discover new things that are at least vaguely similar to the things you like.

But, even if you don’t like these things, then you’ll be able to see how they turned those things into something that you actually enjoy. At the very least, this will show you the importance of having a good imagination and a wide range of influences. Plus, you’ll also have an even greater appreciation of your favourite movies, novels, comics, games etc.. too if you know what inspired them.

The second reason to search for indirect influences on your creative work is because they can help you to improve your own art, comics and/or fiction. If you look at the same things that influenced your favourite writers and artists, then there’s a good chance that you might end up seeing those old influences in a slightly different way. You might take inspiration from parts of them that your favourite creative people didn’t. So, you might end up creating something that is still reminiscient of your favourite things, but is even more unique.

Finally, the other reason is because it’s absolutely fascinating. Doesn’t the idea that there are people throughout history who have influenced and shaped the things you make right now without you even knowing it fill you with curiosity?

Sorry for the short article, but I hope it was interesting 🙂