If you’ve done any research into the history of “Doom“, you’ll probably know that one of the ways that either John Romero or John Carmack (I can’t remember exactly who) envisaged the game was as a game that was – and I quote – “Scary, dark and fast”.

Of course, like many people who only discovered “Doom” a few years after it’s release, the idea that “Doom” – the Shakespeare of the FPS genre – could ever have been genuinely scary was absolutely laughable to me. Hell, even compared to later ID Software games like “Quake”, “Doom” isn’t even particularly dark by modern standards.

Yes, “Doom” is still fast-paced and better than most FPS games that have been made since but I’ve always wondered what it would be like for the people who played “Doom” back in the early 1990s and were actually scared by it.

Well, thanks to an amazing mod called “Lasting Light” (which requires a modern source port like GZ Doom to run) – now I know exactly how those fortunate early “Doom” players felt.

“Lasting Light” turns the gory action game that we all know and love into a genuinely terrifying survival horror game. Seriously, the first time I played this (at night I may add), I could only play for about ten minutes until I quit the game out of sheer fright.

But, wanting to take another look at this mod, I returned to it during the day and decided to review it. So, let’s get started.

One of the first things that you will notice is that the Doomguy isn’t carrying a gun and the levels are darker than usual.

In fact, the only things you are armed with are a lantern (with limited fuel) and some rocks which you can throw to activate switches. Before you say anything, these rocks cannot be used as a weapon – so you are, essentially, completely unarmed. In the dark.

Yes, this is about as bright as the game gets when you aren’t using your lantern…

Your lantern is the only defence you have against the all-encroaching darkness that surrounds you and, when you start each level, you have to turn it on manually.

What this means is that you’ll usually be faced with nothing but a black screen when you select “New Game” on the menu. Don’t worry, the game hasn’t crashed – just click the left mouse button and the Doomguy will raise his lantern.

If you see this when you start a level, then just click the left mouse button.

By now, you’re probably thinking “Wait a minute! This is just a rip-off of that Slenderman game that gave me nightmares for weeks!” And, although there are obvious similarities, there are enough differences to make it into it’s own distinctive game.

For starters, there are three different enemy types that you have to avoid – the creeper, the screecher and the stalker. The mechanics of how each of these creatures works is explained fully on the ModDB page for “Lasting Light”, but they each require different tactics in order to avoid. 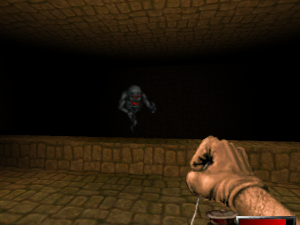 For example, turn your lantern off as soon as you see one of these creatures….

Like any good horror game, you will usually hear these monsters moving around long before you see them (and it’s almost essential to play this game with headphones). Not only that, when they are close, disturbing images will suddenly flash across the screen – making you jump out of your seat. 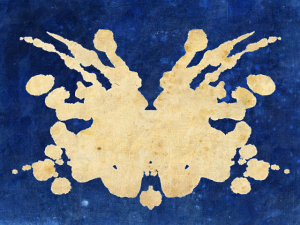 Whilst the images for the relatively benign “creeper” enemies just look like blue and magnolia Rorschach inkblots, the images for the “Screecher” (who reminds me a lot of a cross between Slenderman and a more evil version of the Witch from the “Left 4 Dead” games) are a series of highly disturbing black and red illustrations which seem to have been plucked from the depths of hell itself.

And, no, I didn’t take any screenshots of them – I was too busy recoiling in terror. 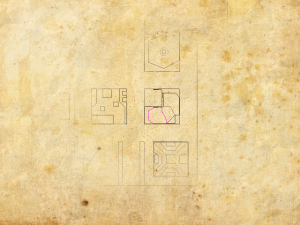 Yes, don’t expect to rely on the level map to get around…

And, without anything to fight back against the monsters and a limited supply of lamp oil (with very few refills), it’s only a matter of time before something gets you.

All in all, “Lasting Light” is a mod that you shouldn’t play at night. It’s a mod that is both highly original and highly derivative at the same time.

It’s a mod that is almost impossibly difficult (eg: I had to use the level skip cheat just to look at any level other than level one of “Doom II”) and it’s a mod that will turn your beloved action game into something that will leave you genuinely terrified. Do I recommend it? Hell yes!

If I had to give it a rating out of five, it would get a four and a half.