[Note: Since I write these articles (and make my comics) quite far in advance of publication, some of my attitudes towards making comics have changed slightly. For example, expect to see some 6-12 “episode” narrative webcomic mini series next year.]
———–

Although this is an article that is intended to help you become more motivated about making webcomics and/or writing fiction, I’m going to have to spend the next seven paragraphs talking about the contrast between my own attitude towards storytelling/comic-making and the attitude of one of my favourite webcomic authors. As usual, there’s a good reason for this that I hope becomes obvious later.

A couple of hours before I started writing this article, I read this fascinating online interview with Winston Rowntree, the creator of one of my favourite webcomics ( a comic called “Subnormality” which I rediscovered again a couple of weeks ago and have already re-read at least once).

The parts of the interview that really stood out to me were when he talked about how webcomics should be taken more seriously as a medium, how they should be more complex and how they should move away from their roots in traditional three-panel newspaper comics. This made me think about my own attitude towards making webcomics.

Of course, all of my own occasional webcomic mini series (like this one) are the exact opposite of this lofty ideal. I’ve taken inspiration from newspaper cartoons (Lise Mhyre’s “Nemi” springs to mind for starters) and I use a similar four-panel format to newspaper cartoons, albeit with some alterations to take account of the fact that my comics will be read on a square computer screen.

I absolutely love the idea of a short, self-contained comic that only takes a few seconds to read and 1-2 hours to make. After a bit of experimentation over the years, I’ve found that this is the format that really works for me. The rhythm and pacing of a four-panel comic is something that just feels right for me.

But, not only that, it also made me think about the subject of “seriousness” and how little of it there has been in anything I’ve produced over the past few years. Although I can make a few private guesses as to why my comics, art, fiction etc.. has gradually become less “serious”, it’s a development that still surprises me to this day.

These days, whenever I even think about telling a “serious” story, it just seems to ring hollow. It just seems like empty melodrama, or it seems drearily depressing. However, as soon as I add some comedy, any comic or fiction idea I have just seems to come alive in a way that I can’t quite describe. Although it seems frivolous, it also seems to gain more meaning by virtue of being something that will make me (and hopefully other people too) laugh.

I mean, even when I made a ten page zombie comic for Halloween, it had to be a comedy zombie comic. As soon as comedy was added to it, the comic pretty much made itself. The same was true with the interactive story I wrote last Halloween. I’d thought about writing a proper horror story but, it was only when I thought that it would be a good idea to parody about three different things that this idea turned into something that had to be made.

I guess that it all comes down to motivation and to meaning.

We all have topics, ideas and subjects that we consider “meaningful”. Most of these are “serious” things – they’re political opinions, philosophical beliefs, life experiences etc… The combination of these things are one of the things that make us all unique individuals. This is the realm of opinion, belief, memory and thought.

If you can find a way to include one of these things in your creative works, then you will have an unstoppable source of intrinsic motivation that will help you to make some of your best stories or comics. This is the realm of ambition, imagination, emotion and passion.

Although there can be a lot of overlap between the two things, they are different. One is who you are and the other is what propels you to create things.

The latter of these two things is the most important one if you want to make comics or write fiction. Even if it’s the polar opposite of the things you consider to be “meaningful”, it’s the things that feel meaningful that will motivate you and make you produce some of your best works. 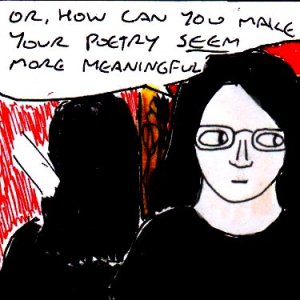 I should warn you that this trick can make your poetry sound bad if it’s done too obviously or too often. So, if you’re going to use this, then be subtle about it and use it in moderation.

Anyway, if you listen to a lot of music, then you can probably guess what I’m going to talk about here. I’m sure you’ve probably heard at least one song which seemed to sum up exactly what you were feeling at the moment that you heard it.

With the possible exception of love songs, most songs aren’t really about the specific subjects and exact emotions that the audience is feeling when they listen to them. But, these songs still feel meaningful and relevant. Why?

Simple, they use ambiguous lyrics.

They use lyrics which could almost be about anything. If you want a good example of this, then listen to “In The Shadows” by The Rasmus. I discovered this song by accident at least a couple of years ago and, at the time, it seemed very dramatic and meaningful.

But, taking a more careful look at the lyrics – they don’t really seem to mean that much. They’re just a collection of vaguely dramatic metaphorical phrases that sound like the kind of thing someone might think when they’re in a gloomy, dramatic or introspective mood.

In other words, rather than having a meaning of it’s own, the lyrics of this song are vague and ambiguous enough to hold a mirror up to the audience that they can see their own emotions reflected in.

If you see a vague emotional statement or evocative description that happens to be vaguely similar to what you are feeling, then you’re going to interpret it as being about your current mood or situation. You’ll see part of yourself in that song or poem and it will feel more meaningful as a result. The poet or songwriter hasn’t written about you, but they’ve created something you can see your own reflection in.

So, if you add a couple of vague emotional or metaphorical statements to your poetry, or even leave the meaning of your poem slightly mysterious – then this leaves your audience more room to interpret it in their own personal way. This will make your poem seem more meaningful.

However, as I said earlier, if this is done too obviously or too often then it will ruin your poem. So, be careful.

Sorry for such a short and obvious article, but I hope it was useful 🙂