Woo hoo! I am very proud to present the third comic in “Damania Revelry”, a new webcomic mini series which is also a partial remake of an old story arc from 2013 (if you don’t mind my crappy old artwork, the original story arc can be read here, here and here ).

Links to many more recent comics can also be found on this page.

Yes, this comic was originally going to be a broadside against this particular (UK) law from last year. However, I eventually ended up taking a slightly more nuanced and realistic look at the subject and how some of the people who dislike the law often have somewhat rose-tinted memories of the effects (or lack thereof) and/or pleasantness (or lack thereof) of the average (formerly) legal herbal offerings from the hippie shops, festival stalls etc… a few years ago.

As regular readers probably know, at the time of writing, I’m busy making a webcomic mini series that will be set in a music festival. Although it won’t appear here until the beginning of June, I thought that I’d talk about some of the reasons why music festivals are such awesome settings for stories, comics etc.. But, first, here’s another preview of the new mini series:

So, why are music festivals such awesome settings for comics, stories etc…?

They’re places dedicated to joy, self-expression and fun. And, in our dour modern society, this is always a refreshing thing – even if the only places they can happen is far away from any kind of civilisation.

So, festivals are filled with dramatic contrast. And, if you’re writing comedy – then dramatic contrast is an absolutely perfect source of humour. After all, you’ve got thousands of people paying for and actively volunteering to spend a weekend in a squalid field somewhere. It’s hard not to see the comedy value in this.

2) Eccentricity: One of the awesome things about festivals is that, like on Halloween, strangeness is almost the norm.

They’re the kinds of places where not being at least slightly drunk by the early evening is probably a little bit suspicious. They have “villages” of stalls that can sometimes look a little bit like something from “Fear And Loathing In Las Vegas” at night.

If you’re an artist then, needless to say, they are one of the most fun types of places to draw. Not only that, if you’re making a comic, then they provide a lot of opportunities for background jokes and/or art-heavy webcomic updates.

3) They’re a rite of passage: Although there are some awesome people who go to festivals literally every year, the most I managed was two years in a row. But, this is part of the charm of festivals -they’re something that most people should probably go to a couple of times, if possible. They’re places that fire the imagination. They’re almost a rite of passage in some way.

And, yet, they’re real things. Even if your comic has some vague pretence of being “realistic” (which my own comics gave up quite a while ago), then you can still set several comic updates at a festival.

Basically, setting your comic at a festival means that you get the chance to put your characters in a “rite of passage” kind of situation without the kind of serious dramatic weight that might come with more “old fashioned” situations of these types (eg: warfare, religious rituals etc…). In other words, it’s an instant source of drama and/or comedy.

Well, I was in a slightly more.. cynical… mood than usual earlier, so I decided to celebrate the sadly inevitable onset of *ugh* summer by making a painting about the many delightful mainstream music festivals which will be taking place across the UK over the next couple of months…

As a blog exclusive (since this painting will probably already have been satirising mainstream festivals on DeviantART before it’s arrival here), I’ll also provide the lineart for this painting too.

As usual, both images in this post are released under a Creative Commons BY-NC-ND licence. 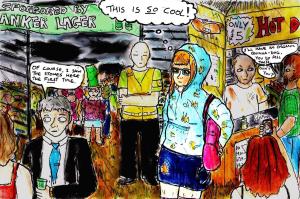 “Mainstream Festivals” By C. A. Brown

And here’s the lineart: