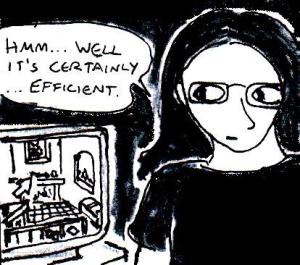 Although this is an article about making art and writing stories efficiently (using the Pareto Principle), I’ll start by talking about computer games for a while because they contain a lot of very good examples of both the good and bad aspects of this kind of efficient creativity.

Have you ever played a type of computer game called a “Hidden Object Game”? I’ve only ever played about half of one of them before (a game called “Millennium Secrets: Emerald Curse“), but I have very mixed feelings about this genre. However, it illustrates a lot of things about “efficient” creativity.

If you haven’t heard of them before, Hidden Object Games are basically a more limited version of traditional “point and click” adventure games, that focus exclusively on puzzle-solving and storytelling rather than exploration.

Hidden Object Games games are almost all played from a first-person perspective and you travel through (an often fairly linear path) of two-dimensional painted and/or pre-rendered scenes. In each scene, you have to find and combine objects hidden on the screen in order to solve puzzles and progress to the next scene.

So, in general, Hidden Object Games contain about twenty percent of what makes traditional point and click games so interesting to most fans of the genre. As such, they can be produced surprisingly quickly and on a relatively low budget.

In other words, there are lots of Hidden Object Games and most of them are fairly inexpensive too. Not only that, it seems to be a very popular genre (albeit more amongst “casual” gamers than “hardcore” gamers). Still, these games sound interesting enough for me to actually want to play some of them.

This sort of thing can also be seen, to a lesser extent, with populist military-based First Person Shooter games (like “Call of Duty”). Although I thankfully haven’t really played any of these, major game studios are able to churn out at least one of these a year by focusing exclusively on combat, flashy graphics and minimalist storytelling.

There’s no exploration, no cleverly-designed levels, no careful searching for ammunition/health power-ups or anything else that made first-person shooter games so unique and fun back in the 1990s and early 2000s. There’s just combat – lots of combat.

But, these cut-down and slimlined modern FPS games are popular – very popular. So, as much as I really hate to say it, they’re doing something right. Even if they are ruining the FPS genre in the process.

In essence, Hidden Object Games and modern Military FPS games follow a business rule known as the “Pareto Principle” or “the 80:20 rule”. This was originally a rule for making businesses more efficient and it basically states that twenty percent of things are usually used eighty percent of the time.

By knowing which twenty percent of something is the most important and/or commonly used, you can focus on it and make whatever you are doing more efficient. As such, this principle has been used in many more contexts than just running businesses. But, can it be used for creating works of art and telling stories?

As Hidden Object Games and modern military FPS games show, the Pareto Principle can certainly be used to reduce production time and to appeal to a wider audience by appealing to the lowest common denominator.

By focusing exclusively on the most “important” parts of your story or work of art and ignoring the rest (eg: sub-plots, complex backgrounds, intricate world design etc…), you can speed up what you produce and offer something which looks like a distilled version of traditional examples of what you’re creating.

But, at the same time, you have to be careful, because – well, everything else contains these important things too. Yes, even those “inefficient” traditional stories and pictures still contain things like compelling main plots, terrifying horror, thrilling adventure, innovative characters, unique art styles etc…

So, although your “efficent” story or work of art contains things that will appeal to a wide audience, it won’t stand out from the crowd. It won’t offer anything particularly new and interesting. This isn’t always a bad thing (I mean, as these two articles show, I use it when I make most of art) but it is something that you need to be aware of if you decide to go down this route.

However, there’s a better and more innovative way of applying this principle to whatever you create. Instead of looking at the twenty percent of your art form that is most popular amongst audiences, look at the twenty percent that appeals to you (and you alone) the most. Then focus on this.

For example, if I was making an “efficient” point-and-click adventure game, I’d probably still keep the two-dimensional first-person perspective (because it’s quicker and easier to create), but I’d focus a lot more on exploration and interesting settings than puzzle-solving. Yes, some people might find this kind of game “boring” – but it would stand out from the crowd and I wouldn’t feel like I was compromising my creativity in any way.

Not only that, it’d be something different and something new. And I’d enjoy creating it even more, which would translate into a better quality game. So, if you want to make an “efficient” story or work of art, then don’t be afraid to devote eighty percent of it to traditionally unimportant things, like sub-plots, backstory, backgrounds, world-building, exploration etc…

Yes, it might not be popular. But you’ll be able to be efficient and innovative. Or you can focus on the lowest common denominator if you prefer to do this – you won’t make anything groundbreaking, but you’ll still have a lot of fun and attract a decently-sized audience.