For those of you not in the know, this sci-fi novel was later adapted into the cinematic masterpiece “Blade Runner” (which is set in the distant future of November 2019). And, yes, there are some fairly major differences between the book and the film. But, more about those later.

Although I first saw “Blade Runner” on VHS at least a year or two before I discovered the novel, I read it at least twice during my mid-late teens (and even ended up getting two different editions of the book, one of which I can’t find). So, I was curious to see whether it was as good as I remember.

So, let’s take a look at “Do Androids Dream Of Electric Sheep?”. Needless to say, this review may contain some SPOILERS. 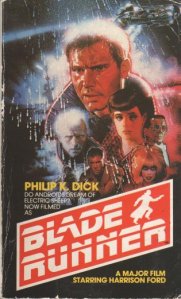 This is the 1986 Grafton Books (UK) paperback edition of “Do Androids Dream Of Electric Sheep?” that I read.

Set in the dystopian future of 1992, most of the Earth’s population have emigrated to other planets following the nuclear devastation of World War Terminus. Even so, some people still live in the habitable parts of Earth. One of those people is Rick Deckard, a bounty hunter for the San Francisco police who tracks down and kills android labourers who have illegally returned to Earth.

Rick is having a bad day. After having arguments with both his wife and his neighbour in the first hour after he wakes up, he goes into work and learns that the police’s top bounty hunter, Dave Holden, is in hospital. Holden had been tracking an escaped android called Polokov, who had got the drop on him and let rip with a laser tube.

But, whilst Rick is eager to collect on all of Holden’s outstanding bounties, Chief Bryant wants him to go to the offices of the Rosen Association and run some tests on their latest android model – the Nexus Six – to see if they can still be detected by the police’s testing equipment.

Meanwhile, in a run-down block of flats in one of the abandoned parts of the city, a driver for an artificial pet repair company called J.R. Isidore is getting ready for work. Isidore is stuck on Earth because he didn’t pass the IQ requirements for emigration. Stigmatised as a “chickenhead”, he finds solace in the empathy box – a virtual reality device central to the new religion of Mercerism. But, just before he is about to leave his apartment, he hears someone else in the building….

One of the first things that I will say about this novel is that it’s even better than I remembered 🙂 It’s an atmospheric, quirky, hilarious and thoroughly imaginative retro sci-fi novel that has stood the test of time surprisingly well 🙂 It is a novel that has a lot of personality and manages to cram a surprisingly large amount of detail, story and worldbuilding into what, by modern standards, is a fairly short novel.

I should probably start by talking about how this novel differs from the film adaptation. Basically, although a few character names, several themes, a couple of plot elements and a few lines of dialogue are the same, everything else is different. Yet, at the same time, you can see where the inspiration for pretty much everything in the film came from. In fact, even the Las Vegas locations in the recent “Blade Runner 2049” film take heavy inspiration from this novel’s dusty, kipple-filled, decaying locations.

Yet, despite all of these major differences, the novel and the film adaptation are pretty much as good as each other. Both have very detailed fictional “worlds”, both have a lot of intellectual depth, both are wonderfully unique things etc… Seriously, don’t let the numerous differences put you off of reading this book.

In terms of the novel’s sci-fi elements, they’re really brilliant. In addition to the laser guns and flying cars that you’d expect, this novel has a lot of brilliant worldbuilding. With Earth being a semi-apocalyptic irradiated planet, almost everything in the novel’s world is defined by this.

Whether it is the lead codpieces men wear to stave off infertility, whether it’s the more prosperous off-world colonies, the much higher (financial, legal and emotional) value placed on the few surviving animals, the prejudice towards those born with radiation-induced brain damage, the empathy-based religion of Mercerism etc… Everything in this novel feels like a logical extension of the story’s dystopian premise.

Another awesome thing about this novel is it’s atmosphere 🙂 Although the novel is set in a realistic semi-apocalyptic version of Earth, all of this bleakness is balanced out with lots of subtle moments of comedy and brilliantly quirky background details. If you’ve read any other Philip K. Dick novels, you’ll know what I’m talking about here. Seriously, this is a story that has a lot of personality to it 🙂

Thematically, this novel is really interesting too. In addition to being an exploration of the value of empathy and how it makes us human, this novel is also a critique of nuclear war, a psychological tale where reality is never an entirely certain thing, a humanist exploration of the emotional/social nature of religion, a tale about old evils still existing in the future (eg: slavery, jealousy, violence etc..), an exploration of nihilism and a tale about how ideals and reality often come into conflict.

Not to mention that some of the novel’s other themes feel more relevant than ever. Whether it is the unprincipled tech company owners who always try to stay one step ahead of any official oversight, the scenes involving emotions being manipulated by technology (which are somehow more ethical than their real equivalent) or the possible implication that human androids aren’t allowed on Earth because of fears that they may replace humanity, this novel still feels surprisingly relevant at times.

In terms of the characters, they’re fairly interesting. Rick Deckard is the sardonic, morally-ambiguous main character than you might recognise from the film. However, he gets a bit more depth in this novel and is also portrayed as much more of a middle-class suburban “everyman” than the “film noir” detective you might expect if you’ve only seen “Blade Runner”. In addition to this, the novel clearly states that Deckard is a human rather than an android.

Like in the film, the novel’s android characters are presented as being fairly “human”. However, they are presented in a much less sympathetic way than in the film, with their lack of empathy meaning that they act in a much colder, crueller and more selfish way than most of the novel’s human characters. In fact, this in itself is a really interesting plot point – since, when Rick meets a cynical and cold-hearted guy called Phil Resch, he can’t be entirely certain whether Resch is human or not.

The novel’s other main character, John Isidore, is really well-written too. He’s a really sympathetic, if slightly naive, guy who gets a decent amount of characterisation and is also designed to evoke empathy in the reader too. Plus, although many of the novel’s other characters don’t get a huge amount of characterisation, they get enough to come across as interesting and/or realistic people.

In terms of the writing, it is really good 🙂 The novel’s third-person narration is written in a descriptive and atmospheric way which, whilst slightly more formal than most modern novels, has a lot of personality to it 🙂 Seriously, I cannot praise the narration in this novel highly enough 🙂 Yes, it’s a bit more slow-paced than you might expect but it’s good enough to justify this 🙂

As for length and pacing, this novel is really good. At a gloriously efficient 183 pages in length, this novel tells a story that most other sci-fi writers would struggle to tell in 300-400 pages. But, due to all of this detail and worldbuilding, this novel is a bit more slow-paced than you might expect. Even so, this isn’t a bad thing. Thanks to a compelling story and lots of fascinating background details, you’ll probably want to spend more time with this novel 🙂

In terms of how this fifty-one year old novel has aged, it has aged surprisingly well. Yes, the novel’s gender politics are a bit dated at times, there are a couple of references to the Soviet Union and the writing style is a little bit more formal than most modern sci-fi novels, but the novel as a whole has stood the test of time really well 🙂 It’s atmospheric, the settings feel believable, the quirky humour still works and the story still remains compelling too.

One other interesting thing about reading this novel these days are the novel’s references to the old sci-fi novels of the 1930s/40s. In the book, these are presented as artefacts of a more imaginative and optimistic age. Of course, now that this novel is also an old sci-fi novel too, this adds a whole new dimension to these parts of the story.

All in all, this novel is brilliant 🙂 If you love the movie “Blade Runner” or if you just want an imaginative and quirky dystopian sci-fi novel, then this one is well worth reading 🙂

If I had to give it a rating out of five, it would get a five.