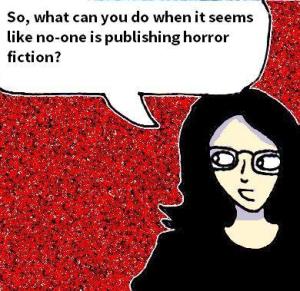 Well, since I’m focusing on the horror genre more than usual this month, I thought that I’d look at a rather dark period in the genre’s history – because it provides some interesting lessons about what to do when no-one seems to want to publish horror fiction.

Anyway, some context. Between the mid-1970s and the early-mid 1990s, horror fiction was apparently an incredibly popular genre. Numerous authors published horror novels and, from the sheer number of old horror novels I found in second-hand shops/charity shops during my teenage years in the ’00s, they were read a lot more widely than they are now.

But, at some point during the 1990s, horror fiction fell out of fashion in publishing. In fact, it’s only within the past decade that modern horror fiction actually seems to be gaining some vague level of popularity again. Even so, finding a dedicated “horror” shelf in bookshops today is more difficult than it used to be – even when horror fiction was at it’s least popular. At best, horror is often lumped in with sci-fi & fantasy these days.

But, despite this, authors from the heyday of horror fiction kept publishing new books when the genre was in decline. So, how did they survive?

1) Related genres: In 1980s Britain, two of the biggest names in horror fiction were Clive Barker and Shaun Hutson. Although there was apparently some antagonism/rivalry between the two authors during the 1980s, they both wrote splatterpunk horror novels during that decade. And, when horror fiction fell out of fashion, both of them dealt with this crisis in a vaguely similar way.

They looked through their own fiction for any other genres hidden in there and focused more on those genres.

For example, Shaun Hutson’s 1980s horror fiction often has a strong “gritty realism” element to it. So, during the horror drought of the 1990s/early-mid 2000s, he took this element and used it to write several grim, gritty, ultra-violent crime thrillers instead (eg: “Exit Wounds”, “Deadhead” etc..). Since this genre seems to be eternally popular, Hutson was still able to write stories that were similar in tone to his classic horror fiction at a time when many publishers avoided horror fiction.

On the other hand, Clive Barker’s 1980s horror fiction often has a strong dark fantasy element to it. This meant that, when horror fell out of fashion, he was still able to write several novels that included his distinctive interpretation of the fantasy genre (in addition to a couple of general fiction novels) – even though it wasn’t until the 2000s that he was able to reintroduce more horror elements into his fiction (with novels like “Coldheart Canyon” and “Mister B. Gone”).

The lesson in all of this is that, if you write horror, then you’ve probably also got another genre hiding in your fiction too. So, if you find it difficult to publish horror fiction, then focus slightly more on that other genre.

2) Fame: When I was a teenager during the early-mid ’00s, one thing that I’d always see on the shockingly slender “horror” shelves in major bookshops were several Stephen King novels. At the time, this used to really annoy me (since I expected a wider variety of authors). But, in retrospect, this offers a really interesting lesson in how to survive a horror publishing drought.

In short, fame can be extremely useful during a horror drought. Yes, this is probably the most difficult way to survive a horror drought (since you also need a horror boom in order to get that fame in the first place) but it can work. I mean, thanks to numerous film adaptations, regular publications and being a household name, Stephen King was still able to put out new horror fiction during a time when publishers were apparently reluctant to even consider printing stuff in this genre.

Likewise, the next novel I plan to review (“The Vampire Armand” by Anne Rice) was first published in 1998. This is a gothic horror novel about vampires that was published at a time when horror fiction wasn’t a popular genre. How and why did this book get around this obstacle? At a guess, it’s probably due to both the famous 1994 film adaptation of Rice’s “Interview With The Vampire” and the fact that Rice is a very well-known author with a lot of fans. So, yes, fame can be useful during a horror drought.

For example, even though horror fiction was probably slightly more popular during the late 2000s, one of my enduring memories of that time period was seeing books from a slightly lesser-known publisher/imprint called Abaddon Books on the horror shelves of major bookshops.

Although this smaller press only really seemed to last a couple of years, they mostly published horror novels (with collections like the awesome zombie-themed “Tomes Of The Dead” collection) and it was really really cool to actually see new horror novels in bookshops back then.

So, yes, smaller presses and/or self-publishing can certainly be an option whenever the mainstream publishing industry loses interest in the horror genre. 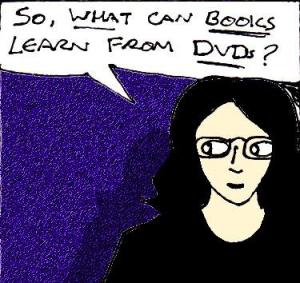 Well, I still seem to be in the mood for writing about books at the moment. So, as a counterbalance to the slight luddism of yesterday’s article, I thought that I’d look at some of the things that books can learn from DVDs. And, yes, I’m aware that watching DVDs is probably also bordering on luddism these days but, well, they’re still my favourite video format.

So, what can books learn from DVDs?

1) Special Features: Although we seem to be moving towards a world where DVDs are more ‘bare bones’ than they used to be (eg: thanks to Blu-ray discs getting all of the special features), the whole idea of “special features” was popularised by the DVD format. It was one of the things that originally set DVDs apart from VHS tapes 10-20 years ago.

Books could learn a lot from this. Although some modern novels do include additional stuff at the end, it usually just consists of either a list of reading group questions, an author bio and/or a small preview of the author’s next novel. By DVD standards, this would probably be considered ‘bare bones’. Sometimes, books will also contain a brief foreword or a list of acknowledgements too. But, this still doesn’t compare to the average DVD from the heyday of the format.

When I was a teenager who read a lot of grisly splatterpunk fiction, one of the most innovative things that I found was a page on Shaun Hutson‘s offical website which included things like extra short stories, a grossly disturbing “deleted scene” from one of his horror novels (which it is implied was possibly censored by the publishers) and an alternate ending to one of his other novels. I’m not going to link directly to Hutson’s official site here but, if you aren’t easily shocked, then the things I’ve mentioned can be found in the “exclusives” menu at the top of the home page.

But, the question I have to ask is why isn’t this sort of thing commonplace in actual books? Almost every published book usually ends up getting edited at some point or another. Most authors probably produce multiple drafts and versions of their stories, and probably end up adding, changing or removing stuff in the process. Would it really be that difficult to include a “deleted scenes” segment in most novels, showing off the best scenes that didn’t make it to the final edit?

2) Chapter titles and contents pages: Yes, books have had chapters for much longer than DVDs have even existed. But, if there’s one thing that is often missing from new books that have been published within the last couple of decades, it’s the good old fashioned “contents” page. A page which tells you how long each chapter is and which easily allows you to remember which chapters key events of the story took place in. It’s quicker to jump to a specific chapter on a DVD than it is to do the same in a modern novel.

Of course, there are practical reasons for this. Ever since Dan Brown popularised ultra-short chapters during the early 2000s, contents pages for some modern novels would probably be at least 3-4 pages long. Likewise, the decline in interesting chapter names (as opposed to just “chapter 1”, “chapter 2” etc…) has probably also lessened the popularity of contents pages in novels.

Yes, I appreciate that in some genres – like the thriller genre – short chapters can improve the pacing and that generic chapter titles are “unobtrusive”. But, in a lot of books, the lack of a contents page and/or proper chapter titles just comes across as lazy.

I mean, one of the cool things about TV shows on DVD is that the episode titles will often give tantalising hints about what to expect in each episode. A contents page filled with intriguing chapter titles can also do the same thing. It’s something that can make readers more interested in the story ahead. So, why isn’t it used more often?

3) Cover art: One of the cool things about physical media formats is that they include cover art. As well as being a source of entertainment, they’re also ornamental objects too. Not only that, the cover art also serves as a form of advertising – enticing people to look closer. These days, DVDs often have far more interesting cover art than novels do. 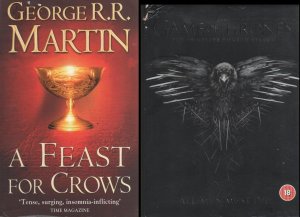 The DVD cover on the right has a dramatic image of a screeching three-eyed raven made out of swords. The book cover on the left has… a goblet.

Likewise, although it’s a little hard to read in the scanned image, the DVD cover also has a melodramatic subtitle about death. The book cover, on the other hand, has a much more mild-mannered quote from Time Magazine. Even though both covers are fairly minimalist, the DVD cover is the more attention-grabbing of the two.

Yes, DVDs are a visual medium and it is easier for cover designers to make dramatic-looking covers by manipulating stills from the film or TV show in question. But, the DVD cover I showed you earlier isn’t directly taken from any scene from the TV show. It was designed by an artist and/or graphic designer, just like a book cover.

So, yes, there’s really no reason or excuse for books from large publishers (who can afford experienced professional artists and/or designers) not having the kind of attention-grabbing, dramatic cover art that is commonplace on DVDs.