Today’s painting is another memory painting, based on the car journey I mentioned in yesterday’s art post.

This painting is based on a random field that I saw near the rubbish tip on the outskirts of Waterlooville. Like with yesterday’s art post, I’ll also provide both the “work in progres” lineart and my initial memory sketch as a blog exclusive.

As usual, all three pictures in this post are released under a Creative Commons BY-NC-ND licence.

Here’s the “work in progress” lineart:

And here’s the initial sketch that I made a day earlier, about twenty minutes after I’d memorised the scene in question.

There’s a bit of a strange story behind today’s drawing. Basically, I was playing a hidden object game when I noticed that one of the objects I had to find in it was called an “oiler”. I’d seen this type of object before in hidden object games, but I was never quite sure why the word stuck in my mind.

Then I remembered. When I was a kid, I made a cartoon drawing of an evil gang of mechanics called “The Oilers”. I’m not sure why, it probably just seemed like a funny/cool idea at the time. Since I couldn’t find the original drawing (from sometime in the mid-late 1990s), I made a small sketch of it from memory in my sketchbook and then carried on.

Anyway, since I couldn’t think of a good idea for a drawing today, I thought that I’d turn my sketch into a proper drawing. As you might expect, I’ll also include the small sketch I made from memory in this post too.

As usual, these two drawings are released under a Creative Commons BY-NC-ND licence.

And here’s the sketch that I made from memory – although I think that I got a few details wrong (since I’m pretty sure that one of the Oilers was holding a badly-drawn revolver in my original drawing). This drawing is also in my current art style, rather than the style I used when I was a kid. I also digitally edited this picture slightly more than usual after I scanned it. 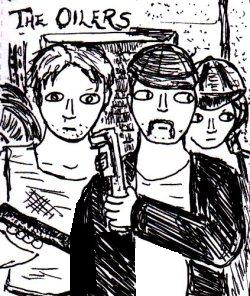 Surprisingly, today’s painting was *gasp* actually kind of planned. Yes, I actually made a little sketch before I painted it.

I’ll add a copy of the sketch to this post as a blog exclusive, since this painting will probably have already been on DeviantART for a while.

As usual, this painting and sketch are released under a Creative Commons BY-NC-ND licence.

And here’s the sketch that inspired this painting:

Well, since I’m still working on this upcoming comic project at the moment, I only had time to paint one quick watercolour and make one quick drawing for today.

As usual, these two pictures are released under a Creative Commons BY-NC-ND licence.

“Sea Ruins Sketch” was a fairly quick watercolour sketch of a random building which I saw in a dream a couple of weeks ago. I’m not sure if I got the perspective right (since I was looking up at it) but I’ll probably paint a larger landscape featuring this building in a couple of days’ time.

“Glowing Crystals” By C. A. Brown

“Glowing Crystals” was a random drawing I made for today. I guess it that it turned out ok, although the background was slightly uninspired though.

“Mercy Pyramid” By C. A. Brown (This image is released without copyright)

Well, I happened to notice the cover art for a couple of old Sisters of Mercy vinyl records when I was randomly looking around on Wikipedia. The cover art to the “Body And Soul” EP really grabbed my attention and I started to think “Cool, I wonder how they made something like that back in the 80s” before suddenly realising that I could create the same effect in less than a minute on my computer.

So, I decided to make a random sketch to test this out. For some reason, I decided to mostly use dots and horizontal lines (to give it an “etched” kind of look) – which meant that this simple sketch took about five times longer to draw. But, on the plus side, it looks like something from a 1980s computer game LOL!!!

Although “Mercy Pyramid” is too simplistic to include in any of my “Today’s Art” posts, I thought that it looked kind of cool – so I’ve decided to post it here. I’ve also decided to release it without copyright – so feel free to use it however you like.