One of the problems with being a fan of sprite-based FPS games from the 1990s is that there aren’t that many of them out there.

Sure, there are more fan-made “Doom”/”Doom II” levels than you could ever play – but there aren’t that many different games. So, imagine my delight when, during a sale on GOG I found a mid-90s FPS game that I’d barely heard of called “Eradicator” for £1.99 (I think that it’s about a fiver at full price).

Since I bought a few games during this sale and don’t have time to complete them all, this is another partial review. In other words, at the time of writing this review, I’ve only played a little under half of the game. So, whilst this is more than just a “first impressions” article, it isn’t quite a full review either.

So, let’s take a look at “Eradicator”:

And, as you would expect, heavy metal/ hard rock music plays during this screen. \m/

“Eradicator” is a sci-fi FPS game from 1996 that uses wonderfully retro sprite-based graphics.

Although “Eradicator” uses it’s own unique game engine, it is remarkably similar to the Build engine used in “Duke Nukem 3D”, “Shadow Warrior”, “Blood” and “Redneck Rampage“. Seriously, you can barely tell the game engines apart!

However, unlike some Build engine games, there’s no source port for this game. The edition on GOG comes with a pre-made DOSBox launcher. What this means is that you can’t really use modern controls with this game (due to the lack of vertical mouse look). So, if you miss “Duke Nukem 3D”/”Blood”-style keyboard only controls, then you’re in luck here 🙂 However, you can also use the mouse for movement and/or shooting if you really want to.

Unusually for a mid-1990s FPS game, you actually have a choice of characters. There are two alien characters (Eleena and Kamchak) and one human character (Dan Blaze).

Although your choice of character mostly just affects which voice actor you’ll hear throughout the game, each character also has a different first level and two unique weapons too. Plus, if you want to, you can also switch to a third-person perspective whilst playing- although the game is a lot more playable in the traditional first-person perspective. 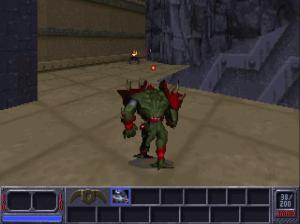 Kamchak looks quite cool in third-person perspective, but I imagine that the combat probably gets confusing if you use this perspective.

One of the first things that I will say about this game is that, in terms of gameplay and aesthetic design, it’s a bit more like a late 1990s FPS.

In other words, the game’s locations mostly seem to be gloomy, industrial, understated and -sometimes- boring. Likewise, most levels require you to complete one or more mission objectives before you finish the level.

Fun fact: This game came out the same year that “Quake” did.

However, some of the worst elements of mid-1990s FPS games are present here in abundance. As well as the dreaded first-person platforming segments, there are puzzles! Some of these aren’t that bad, but there are at least two timed puzzles within the first half of the game which will frustrate the hell out of you.

One requires you to navigate a maze-like base and shoot out three generators within a limited time frame (otherwise you have to do it again). Likewise, another puzzle requires you to press four switches within a limited time (and you pretty much have to memorise the level layout to do this). Plus, there’s also one part of level three where you can get totally stuck if you do things in the wrong order. 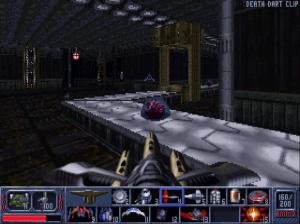 Yes, after sprinting around it and pressing switches more times than you remember, you will come to absolutely loathe and despise this particular level!

On the plus side, some parts of this game includes the kind of challenging, intense combat that classic FPS games are famous for.

Not only do you get a ridiculous number of imaginative sci-fi weapons (I think that there are something like 15 different weapons available – one of which is like a primitive version of the Redeemer from “Unreal Tournament”), but there is also a reasonable variety of different cyborg/ alien monsters to fight and even at least one boss fight too.

I almost got stuck on this, until I remembered that -whilst the flamethrower looks cool – the rocket launcher is a MUCH better weapon to use!

Another cool, imaginative thing in this game is that you can actually remotely control things like robots, security cameras and guided rockets.

Learning how to do this can be a bit annoying (through trial and error, I learnt that you have to press the “action” key twice) but it’s really cool when you know how to do it. Needless to say, this imaginative feature is an integral part of the game and you’ll have to use it in a few areas in order to progress.

Yes, controlling enemy robots is cool – but it can take a while to work out how to do it.

Like many classic 90s FPS games, “Eradicator” also comes with a level editor. Although this apparently also includes a feature that allows you to convert “Doom” WADs into “Eradicator” levels, there seems to be little to no documentation about how to use the editor.

Not only that, it’s a proper old-school DOS program too. For example, in order to convert “Doom” levels, you apparently have to manually type out the file path for the level in question: 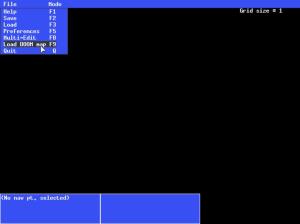 This looks cool, but unless you’ve memorised the exact location of your “Doom” WADs, then you’re going to have problems.

In terms of music, the best music in the game is probably the title screen music. The rest is either forgettable or nonexistent. But, like in many classic 90s FPS games, your character will occasionally make comments during gameplay. Most of the time, these are just “realistic” functional comments about the mission, rather than humourous comments though.

In terms of the voice acting, it’s kind of meh. The voice-actors for Eleena and Dan Blaze both sound at least mildly bored and unenthusiastic. The voice-actor for Kamchak seems to be trying to impersonate a Klingon from “Star Trek”, which is kind of amusing. Still, it’s cool to play an old-school FPS game where your character isn’t ominously silent throughout the game.

If you play as Eleena, then she will quite literally say “This must be a factory” in this area. Thank you, captain obvious!

All in all, from what I’ve played, “Eradicator” is an ok game. Although it’s absolutely great to play a sprite-based FPS game from the 1990s that I haven’t played before, “Eradicator” doesn’t quite reach the high standard of “Doom II”, “Rise Of The Triad” “Blood” or “Duke Nukem 3D”.

Yes, it’s miles better than “Star Wars: Dark Forces“. But, it’s still just sort of average. The visual design is a bit dull, the game’s more innovative features can be a bit clunky at times, and the puzzles can be annoying too. But, it’s still fun nonetheless. It’s a game from a time when FPS games were about exploration and imagination, rather than just online multiplayer and mindless corridor-like levels.

If I had to give what I’ve played so far a rating out of five, it would get three and a half.