The first thing that tipped Sally off to the fact that the date wasn’t going well were Tom’s bookshelves. The books were the wrong way round. Two uniform rows of beige pages stared out, blending in perfectly with the magnolia wall behind them. She thought about leaning in and taking a closer look, but decided against it. Instead, she said: ‘It’s so good to find someone with books these days.’

Tom laughed and reached for a slender electronic device, the plastic a slightly brighter shade of magnolia than the walls: ‘Oh, those. They came with the flat. I rent books electronically with this.’

‘Ah, cool.’ Sally tried to smile. ‘I’m probably kind of old-fashioned. I don’t know, I always worry that those things might crash or run out of battery or become obsolete.’

Tom’s voice was confident, like someone from an advert: ‘Ah, but that’s all part of the premium plan. You see, I rent the device too. So, it gets updated every year or so with the latest model. Plus, all of my books are kept in the cloud too.’

‘But, what if the wi-fi goes out? Or the cloud servers crash? Or what if…’ Sally stopped. ‘Oh god, I sound like one of those doomsday preppers.’

Tom looked puzzled. A second later, he raised his voice: ‘Bub, what are doomsday preppers?’

On top of the beige bookshelves, a small white sphere glowed blue. An electronic voice said: ‘Doomsday preppers. People who believe that the collapse of civilisation is imminent. Common preparations include a “bug-out bag” of essential supplies and detailed emergency plans. Those who fear a zombie apocalypse often also stockpile weapons too. In jurisdictions, like this one, where firearms are restricted by law 86% of forum posts suggest that a shovel is the best defensive tool. Do you want to learn more?‘

‘I’ll queue a few episodes up to stream later. I’ve always meant to watch it.’

‘You’ve never seen Star Trek? Don’t worry, your first time is always the best. Anyway, I got you this.’ Sally fumbled through her bag and pulled out a small wrapped parcel. She handed it to Tom. Wrapping paper rustled quietly in the silent room. Tom stared at the little box of chocolates.

A second later, he smiled and said: ‘I got you something too.’ Tom reached for his phone. It was the latest model. After tapping it a couple of times, he held the screen up. It read: ‘Immersive cinema. 2001: A Space Odyssey. Admit two.‘

Tom nodded: ‘I prefer experiences, you know. You should see some of the selfies from the last screening of it. People look like they’re enjoying themselves.’

‘I’m sure they are. Hey, do you want to get dinner?’ Sally was about to suggest a restaurant when she stopped and said: ‘I’m sure you’ve got an app for it. Crowd-sourced takeaways or something like that.’

Sally smiled: ‘Awesome. And I thought that I was old-school. What did you have in mind?’

As final words went, they wouldn’t go down in history. Whilst Tom chomped and guzzled merrily, the last thoughts to go through the gnawed remnants of Sally’s brain were that zombie movies had lied to her. That was, she thought, the problem with all of them being inspired by one movie from the sixties. They were stuck in the past. Stuck in the days when hollow, soulless beings stood out amongst the crowd. But, of course, everything gets updates these days. 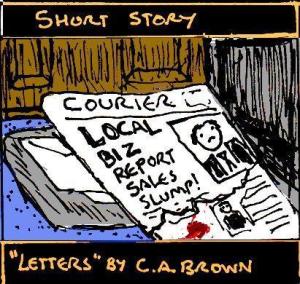 It all started in the local newspaper, of all things. Although this wasn’t something that Joanne usually read, the paper got delivered to her by accident every now and then.

Every time it arrived, she’d glance over it just to remind herself why she didn’t get it every day. And she always looked at the letters page. After all, it was like a website comment section, but with more articulate writers and less venom.

But, then, she noticed that the same few people kept getting their letters in the paper. It had started when some crackpot’s letter about building a giant portcullis in the channel “to show the EU we mean business” had somehow got past the editor. She’d rolled her eyes, thought “who wrote this?” and remembered the name.

When the next paper arrived four days later, she noticed that he not only had the top spot on the letters page but that he was fervently arguing in favour of bringing capital punishment back “in order to sort out those inconsiderate types who check their mobile phones in the cinema.”

She also noticed a frothing, ranting letter from another person who was arguing that there should be hefty fines “for non-attendance of weekly church services, to restore this land’s moral fibre“. She made a note of the name.

Sure enough, when a crumpled copy of the local paper arrived on Joanne’s doormat two days later, not only were letters by these two people featured – but one of the other ranting letters was shockingly badly-written. Normally, she despised it when people got pedantic about things like grammar and spelling. But, this letter made the comments below online videos look like eloquent treatises by comparison. She made a note of the name.

She had almost forgotten about the paper when the next one landed on her doormat eight days later. Half of the front page had been torn off and the third page was stained with what looked like dried ketchup. No doubt that the delivery boy had stopped off at the chip shop and needed somewhere to ditch the paper he’d accidentally ruined. Still, Joanne didn’t complain. It was a free paper.

Taking a deep breath, Joanne flicked to the letters page. Sure enough, the three people were still there. But literally every letter was just like them too. There wasn’t a single cheerful letter about something mildly funny happening, a mention of a kind local person or a random piece of retro nostalgia. It was just two pages of solid ranting, foaming and frothing.

For the first time in quite a while, Joanne decided to go out. The emotion caught her completely by surprise. But, even the soul-crushing stage fright of appearing in front of random strangers seemed reassuringly normal compared to the stuff that she had just read. So, after changing into some of the few vaguely semi-formal clothes she kept lying around, she stepped outside.

When she briefly glimpsed a distant person slowly strolling down the street towards her, she realised that this had been a bad idea. They’d have to pass each other and this could involve eye contact or, even worse, some kind of cheery greeting. Would they pass each other too closely or too distantly? Whatever happened, it would probably be wrong. It would make her feel like some kind of freak for the next couple of hours.

With a vaguely practiced motion, she fumbled through her bag for something whilst turning around. If this person was looking, it would just seem like she’d forgotten something and had to return home to get it. A perfectly normal thing to do. Even though she was sure that she was horribly out of practice at the old handbag-turn, it seemed to work.

Then, as she took the first quick steps back along the street, Joanne let out a long sigh of relief. On the corner of Grantfield Road, she saw two gaunt skeletons merrily feasting on something. She glanced over her shoulder and, sure enough, the random person strolling along the road was none other than… what was the right word for it?… A former human? A reanimated body? No doubt that “zombie” was considered front-page scandal rude. But, she thought, would they even care?

Whistling a cheery tune, she strolled back home, occasionally waving at the shambling, soulless beings that she passed. None of them cared whether she was “normal” or not. Best of all, there was another copy of the paper lying on the doormat when she got back. As she opened it, she realised that all the horror movies she had ever watched had got everything totally wrong.

When the zombie apocalypse hits, Joanne thought, looking for survivors is the last thing you want to do. After all, most of the people who can go for weeks without noticing that the dead have risen from their graves are the kind of people who write angry letters to the local paper. Thankfully, she thought, not all of them are. A warm smile crossed Joanne’s face. Without even having to pretend, she had become the most normal person on the planet and it was awesome.