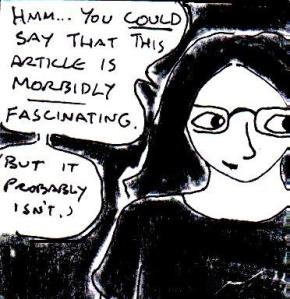 Surprisingly, I had no clue what “dark comedy” even was until I was in in my mid-late teens. Bizarre, I know.

Don’t get me wrong, I’d read, watched and enjoyed at least a few things that fit into this genre when I was a kid (eg: Terry Deary’s excellent “Horrible Histories” books) – but I had no clue what “dark comedy” actually was until I was slightly older.

These days, it’s pretty much my favourite genre of comedy.

One of the great things about dark comedy, like the two genres which it’s composed of (eg: comedy and horror), is the fact that it goes well with virtually any other genre.

You can include dark comedy in sci-fi stories, detective stories, romance stories, historical fiction, literary fiction, fantasy stories etc… If you can think of a genre, you can add dark comedy to it – it’s that versatile.

Another reason why dark comedy is such an amazing genre is because it combines two of the three most emotionally-powerful genres of fiction. I am, of course, talking about horror and comedy (but not erotica).

Dark comedy takes the depressing “edge” off of the horror but also prevents the comedy from becoming too light, unrealistic and annoyingly flippant. Somehow, dark comedy becomes greater than the sum of it’s parts.

So, how do you write it?

A good piece of general advice is that you shouldn’t try to write dark comedy. Just start telling an “ordinary” story and, if any dark comedy appears, then this is a bonus.

The best dark comedy usually just emerges when you least expect it, just like the four horsemen of the apocalypse.

By practising introducing comedy into horror stories or introducing horror into comedy stories, you’ll probably start to pick up the basics of writing dark comedy.

Not only that, it can also help if you immerse yourself in the genre and have a good level of knowledge about what does and doesn’t work in dark comedy.

If you’re totally new to dark comedy, then I would recommend reading “Twisted Little Vein” by Warren Ellis, watching a Michael Lehmann film called “Heathers” or watching any TV show starring Chris Morris. If you can find a copy of it, then I’d also recommend watching an old BBC show called “Monkey Dust” too.

Or, if you don’t have time for these things, then just watch this absolutely hilarious Mitchell and Webb Youtube video (animated by Harry Partridge).

In addition to this, remember that – for comedy to be any good – you must find it funny when you are writing it. If you’re not grinning at the very least when you’re writing your dark comedy story or comic, then you’re doing it wrong.

But, at the same time, remember that other people have to find your story funny too – not everyone has the gleefully twisted sense of humour required to both write and appreciate dark comedy. So, it can be a good idea to make sure that dark comedy is only part of your story and that there are things in there (eg: “ordinary” comedy, “ordinary” horror, an interesting storyline etc….) to appeal to everyone else too.

Sorry that this article was so short and so basic, but I hope that it was useful 🙂

5 comments on “Some Very Basic Tips For Writing Dark Comedy”