Although I’m often fairly cynical about the creative merits of fan fiction, I absolutely love making fan art. And I’m honestly surprised that I haven’t written an article about making fan art in ages.

This is probably because, starting tonight, I’m going to be posting series of fan art paintings and cartoons about obscure 1990s TV shows, games etc… Yes, I know that it contradicts what I said in yesterday’s art post, but it seemed like a good idea nonetheless. Anyway, here’s a preview: 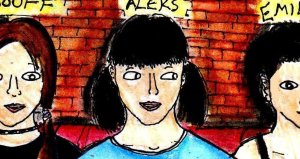 Anyway, since I seem to have got back into making fan art at the moment, I thought that I’d offer a few basic tips about how to make good fan art that people will love. So, let’s get started:

1) Have a unique art style: Like a good cover version of a song, a good piece of fan art shouldn’t just be an identical copy of the TV show, game etc… you’re basing your fan art on.

In other words, one of the central appeals of fan art is seeing how different artists interpret the same character or group of characters.

So, what this means is that you should probably take the time to develop your own unique art style before you start making fan art. Not only will this make your fan art stand out from the crowd and have more “personality”, but it also means that your fan art is clearly recognisable as fan art too (and no-one can accuse you of just tracing original artwork or anything like that).

2) Have fun: One of the things that makes fan art so fun to look at is the fact that fan artists can often do all sorts of hilariously unexpected things with the source material.

Fan art that is just a simple drawing or painting of a character is often slightly boring, unless the artist has a very interesting style. However, even badly-drawn fan art can be fun to look at if it is imaginative and/or funny.

In other words, let your imagination go wild when you’re making fan art and also don’t be afraid to caricature and/or to parody the things that you really love. Remember, the people who will mostly be looking at your fan art are fans themselves, so they will probably still get even the most obscure and random in-joke that you can think of.

Likewise, showing your favourite characters and/or actors in cool situations that weren’t in the original source material can be a great way to make your fan art interesting to other fans. Just remember to be tasteful here…

But, most of all, adding some humour and/or imagination to your fan art shows everyone that you’re a fan yourself. After all, if you were making fan art based on a TV show that you’ve never seen or a game that you’ve never played, then you probably won’t be able to think of any good jokes about it.

3) References: Generally, if you’re making fan art based on something, then it’s a good idea to look at a few stills from it in order to make sure that everything looks right.

Google Images is absolutely perfect for doing this. But, you should only use these images as a general guide and/or reference and you shouldn’t just make an identical copy one of them. Not only is this bad practice, but it also looks boring and shows a total lack of imagination too.

But, if you absolutely have to copy something identically for your fan art, then at least try to make sure that your fan picture is a composite of parts from several different pictures (the more the merrier) and that you’ve added at least a small amount of your own imagination and/or creative thought to it too.

4) Copyright: This is a huge grey area when it comes to fan art and there is some controversy over whether fan art can legally be considered “fair use” and/or, in some cases, a legitimate form of parody under various countries’ copyright laws. I’m not a lawyer, so none of this should be taken as legal advice.

But, in general, there are a couple of things you should remember with fan art – most TV Channels, celebrities, game studios etc… will generally tolerate fan art as long as you aren’t making a profit from it in any way (eg: don’t sell your fan art!) and that it’s fairly tasteful (eg: outright parodies are usually ok, and sometimes protected by law – but nude/erotic fan art is unlikely to be acceptable).

In fact, smart businesses will usually see non-commercial fan art as either a form of free advertising or a way to maintain fan interest in their products. Plus, no-one wants to be seen to be threatening their own fans for expressing their fandom (in a tasteful way, of course). As for my own views about other people making fan works based on my work, take a look at my fan art/fan fiction policy.

However, according to this article about American copyright law that I read a while ago, it isn’t a good idea to use logos/trademarks in ordinary fan art.

Unless, to my knowledge at least, you’re parodying the logo/trademark in question. Likewise, if you only show part of a logo, then it’s usually clear that something is unofficial and/or a parody (and therefore probably unlikely to be a trademark violation, since people are unlikely to confuse it with the “official” product). But, again, I’m not a lawyer and none of this should be taken as legal advice of any kind.

I didn’t realise this when I started making this series a while ago, so I’ve had to crop most of my upcoming fan art pictures to remove TV show/game logos (except one that clearly parodies the design of a TV show’s logo ), which is why many of them will be slightly smaller than my usual paintings are. I’m probably just being paranoid here, but sorry about this in advance.