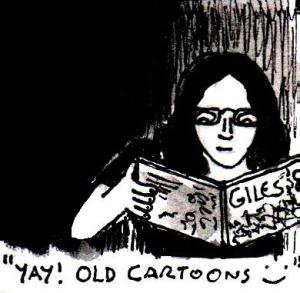 A couple of days before I wrote this article, I was looking through some old books of “Giles” cartoons from the 1960s and 70s (which also contained earlier cartoons from the 1950s too). This was an absolutely fascinating experience and it kind of made me think about the whole subject of old newspaper cartoons.

If you’ve never heard of “Giles” before, he was a famous newspaper cartoonist in 1940s-90s Britain (here’s a hilarious old 1940s British Pathé newsreel of him at work).

Although few of his cartoons were published in newspapers during my lifetime (although, when looking online, I managed to find the cartoon that was published on my original birthday), there are countless collections of his cartoons out there. Along with cartoonists like Low, he’s probably one of this country’s more famous 20th century editorial cartoonists.

The interesting thing about “Giles” cartoons is that they show a world that is both familiar and totally alien to me. They have a brilliantly cynical sense of humour and there’s a lot of stuff in there that seems very apt and instantly recognisable, but they’re set in a slightly different and older version of this country.

In other words, these “silly” and “disposable” daily newspaper cartoons showed me more about mid-late 20th century history than a lot of actual history articles and history books probably would.

You get to see the past through the imagination of just one person who was alive then, with all of their opinions and strange and amusing quirks (eg: for some reason, Giles seemed to have an absolute hatred of pipe smoke. As soon as someone in his cartoons actually lights a pipe, it often belches out vast conspicuous plumes of ink-black smoke that blot out large parts of the cartoon).

This reminded me a lot of another fascinating book (which I actually own two copies of, for some bizarre reason) called “The Cartoon Century” (Ed. Timothy S. Benson). This is a book that collects British editorial cartoons from every year of the 20th century and it is absolutely fascinating. Although this book explains the historical context of a lot of the cartoons, it’s fascinating to see the popular humour of decades past.

Likewise, another newspaper cartoon series that is absolutely fascinating from a historical perspective are Peattie & Taylor’s “Alex” cartoons. Although this is still a current cartoon series, it’s been going for quite a while and I’ve got a few old second-hand books of these cartoons from the 1980s and 90s (as well as some from the ’00s).

These are timelessly-hilarious cartoons about the life of an unscrupulous businessman called Alex and, yet, you can see the gradual passage of history in these comics. Over time, the characters get slightly older. Over time, the background details change slightly. The topics of conversation change, the jokes change etc…

Of course, this might just be a British thing or possibly a European thing. The few classic American newspaper cartoons that I’ve seen seem to be frozen in an almost timeless state. For example, in Jim Davis’ “Garfield” cartoons, everything seems to take place in some bizarrely frozen version of 1970s/80s suburbia. Likewise, in Scott Adams’ “Dilbert” cartoons I’ve seen, they also often seem to take place very slightly outside the space-time continuum (with the possible exception of changing computer designs in the background).

Still, as historical documents go, old newspaper cartoons are – by far – one of the most fascinating types.